We're back with a huge recap of all that's happened in the land of MWLL dev these past few months! This includes April's major v0.14.0 release that introduced three new assets, as well as an exciting announcement made around that time!

Greetings, living legends! It's been a hot minute since our "teaser" back on April Fool's, but since then versions 0.14.0 through 0.14.3 have dropped! v0.14.0 was a huge update, notably introducing three new assets and a targeting controls revamp! The few updates that followed brought QoL adjustments and improvements to the HUD, as well as a hotfix. Additionally, you've probably been aware of something called MWLL2 since mid-March - we'll briefly cover that here as well!

As with all major updates, this was a huge effort. After some cheerleading to get our few but talented artists to push through on the new assets, then several internal release candidates and finally a public test later, we released 0.14.0 in early April! The biggest highlight here was the introduction of three new assets, as well as a rework of the targeting controls! A bit later we found an issue with the revamped targeting controls and fixed it. About a month after that, we released 0.14.2 as a balance pass and to address certain long-standing mechanics abuse. Here's a breakdown of the biggest changes in this series of updates:

Shoden - A Clan-tech heavy wheeled tank designed with the aim of fulfilling a defensive role. As such, it's pretty slow, but that's outweighed by the immense amount of firepower it can carry. In lore, the Shoden generally boats lots of missiles, but in MWLL its variants pack not just oodles of missiles but also massed ballistics or lasers. This tank's fairly low-profile for its class, and looks like a narrow brick on wheels, but also hits hard like a brick.

Schrek - This Inner Sphere assault tracked tank is basically an Awesome mech in disguise. In lore, it was designed to be a long-range partner to other units, such as the Demolisher. In MWLL, it accomplishes this role excellently in its Prime configuration (three ERPPCs!), but other variants are generally more geared toward medium-range support. The Schrek is also one of the few tanks that uses a Fusion engine, enabling it to reach a speed of 76 kph, rather fast for an assault tank. Drive enemies out of your swamp with the Schrek, let them know it's all ogre the minute they're in range! /badpun

Archangel - Remember how we were joking about including the Archangel in the last article? Well, uh, we really weren't. Surprise! Consider yourselves trolled. Anyway, behold the most out-of-place-looking mech in the game! Why? Firstly because it's a Word of Blake mech, and secondly because the model was commissioned outside the dev team by a particularly ambitious tester. (For those unfamiliar with the lore, the Word of Blake is a faction that's basically space Comcast-turned-religious fanatics with nukes and an obsession with cybernetics. They made their own line of mechs, and the Archangel is the heaviest in that line.) Just like in the lore, the Archangel in MWLL is built around being a line anchor or "zombie" mech; it's nigh unkillable, thanks to the currently unique Compact Engine it uses. This new engine is pretty neat in that it has a side torso damage transfer modifier of 0.66x as opposed to the XL Engine's 1.6x (Clan) and 2.0x (IS), enabling longer battlefield endurance. The tradeoff is this engine takes up loads more space, so the Archangel is left with a comparatively light armament for an assault mech. Also a reminder that the knife on the left arm isn't an actual retractable blade like in lore - it's purely cosmetic! Credits and thanks for the model and texture go to Nathan Sherwood and Alexander Zabala, respectively.

Introduced in v0.14.0 was the separation of air and ground assets into two targeting "groups". We saw your feedback in our survey from back in February, and the data suggested that generally most folks didn't mind having the Target Previous Friendly and Enemy keys replaced with something else. Why did we do this? Because in cases where you have multiple air and ground assets on scope, it's distracting and time-consuming to cycle through both categories to target the nearest air or ground unit. Do check out the full patch notes for a detailed overview. v0.14.1's revision to it is the most recent.

Suspension Kick - Tank pilots used to live in fear of getting stuck on the smallest things - or even nothing at all. No more! As of v0.14.2 every tank asset comes with suspension kick equipment, which basically gives your vehicle a firm nudge in the opposite direction of its turret's facing.

Narc Beacons and Artillery Missiles - This might anger some folks, but the interaction between Narc Beacons and Laser-Guided Bombs and Arrow IV missiles got hit with the nerf bat in 0.14.2. You know how Narc beacons stay active after a target's been pummeled with missiles? Well...that's no longer the case with the AIV and LGB - and only those two. Narc beacons are now destroyed when the target they're attached to is hit by either of those two weapon systems. This was done for a couple reasons, one of which was to discourage players from staying in AIV assets all game. The other was to lessen the annoying experience that was getting lit up by a Narc beacon and then pounded for a long minute by a swarm of artillery missiles from both air and ground assets.

C-bill Transfers - Also introduced in v0.14.2, this is a two-part change: Firstly, the maximum C-bill transfer amount has been halved from 10k to 5k. This was done to prevent abuse of this mechanic, which would often lead to very early-game assault mechs when multiple players would coordinate to feed one of themselves with credits. Secondly, to further curb this issue, C-bill trading has been locked from happening at all for the first ten minutes of a match by default. This is a server-side configurable value. We'll see how these changes play out over the next few months, but hopefully early-game surprise assault mechs and the like will be a lot rarer.

Not too much to say here, except that the Catapult and Black Lanner mechs got actual cockpit art with v0.14.0! We hope you like it! 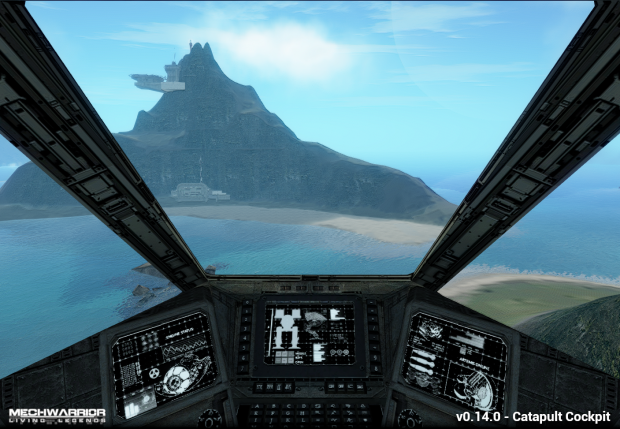 Heatsink Healthbar - As of v0.14.2 you can now see a more accurate indicator of just how banged up your heatsinks are! Note that the more damage they take the less efficient they will dissipate heat. We've got a quick clip on how heatsink damage works:

Weapon Group Indicators Rework - Also introduced with v0.14.2, a now more useful weapon group status indicator! You can now see when your weapons groups are in range - even if part of the group isn't in range - as well as if all or part of the group is in a ready state. You can even see if your target's below a weapon's minimum range (if said weapon has one). Check out this video below for a more detailed explanation:

As is customary for big releases, some past assets' variant loadouts got tweaks, while some weapons and equipment got balance passes and touch-ups (cheaper CERPPCs, anyone?). Also several maps that had community-made enhancements now have those changes officially incorporated as of v0.14.0. They should play better now, and in some cases you might see FPS increases. Lastly, several assets got shader adjustments to have a better specular sheen, while a few others got minor cosmetic tweaks, like the Catapult's torso resize. Lastly, the Broadsword dropship got much better textures! 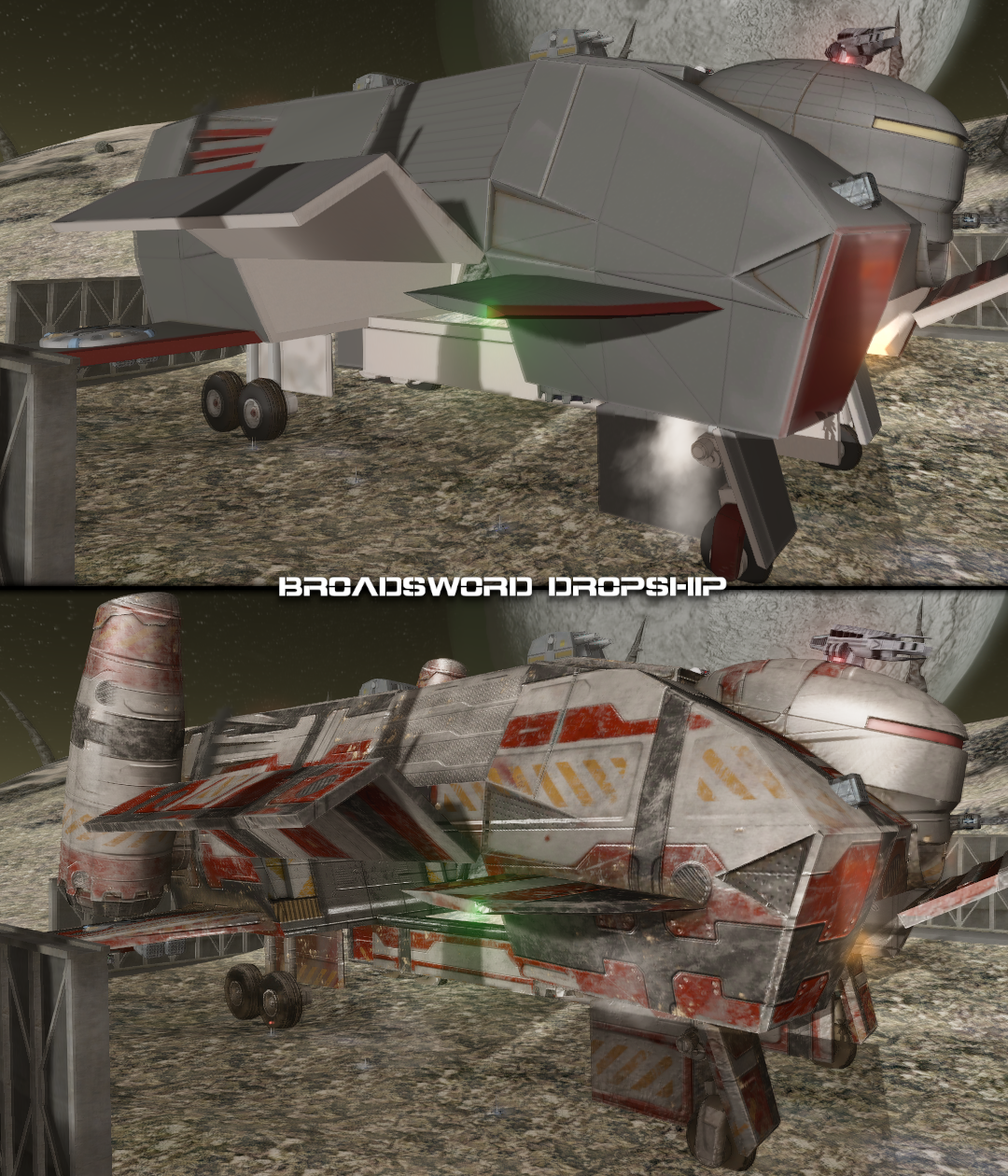 Huge thanks to everyone that contributed to this effort - it was no small feat! From the developers, to the alpha testers, to the public testers - it's always amazing what we can accomplish when we work together! As always, the complete changelogs can be found here.

Yeah, it's actually happening! The seemingly endless cries to "Just Port It" have been heard! It was about two years in the making, and started out as a thinktank discussion group among some of the veteran players. However, with the advent of MW5 and its subsequent modding scene, this group quickly grew to consist of over fourty people diligently working on recreating the original MWLL's spirit in MW5's engine (Unreal Engine 4). Just this past week, however, the project’s dev team announced it’ll be going standalone, electing to publish independently under Microsoft’s Game Content Usage rules! It will no longer be dependent on MW5. Of course, with this development came a name change, so the project is now titled Living Legends 2.

Much like with the original, it's quite a work of passion - for both the BattleTech franchise and MechWarrior: Living Legends as a project. The new team behind LL2 is made up of some devs from MWLL, as well as a whole heap of fresh talent from the greater Battletech community. There's even a few devs from Wandering Samurai sprinkled in! Don’t worry, the MWLL Community Edition project will still keep chugging along as it always has.

Do check out and follow LL2’s Twitter, their Discord server, and their own ModDB profile. We know you've probably got a lot of questions about this great news, so here's a FAQ the LL2 team has prepared.

We wish the team of LL2 all the best in this monumental undertaking, and are excited to see where the project goes from here. Exciting times are ahead for not only MWLL’s community but MechWarrior and BattleTech fans in general! And while LL2 is still a long ways out, both dev teams encourage you to hop into MWLL to get a gist of how the sequel will play.

While LL2 is being built up, MWLL's development focus will be on heavy VTOLs and a thoroughly reworked flight model. There likely won't be any new assets added while this is going on, but we hope to bring you two new VTOLs - the Anhur and Karnov - at the end of this endeavor. That's all still a long ways out for now, though. As for the long-awaited Battle Armor update...that'll have to wait until after the flight model rework and heavy VTOLs. Currently, the biggest roadblock there is how we'll be able to integrate any new BAs into the buy menu - which itself could use an overhaul. So if you know anyone that's still willing to dive into scarecely documented Flash code or C++, we'd love to have them!

Whew! That was a lot to cover, and it’s only the big stuff. We haven’t even gone into the community events and such here, but check out our official community Discord server to see more on that.

Till next time, and take care!

Mother of god. I need to shrek. Now, need population for the game.

With LL2 taking shape, now lack of AI hopefully wont be a problem to populate servers!

Heck. I was really hoping to see customizable tanks and VTOLs in MWM5. Unless LL2 is going to have singleplayer content, I can't see myself jumping into it.

LL2's aim - for the time being, at least - is to recreate MWLL in a much more stable and modern engine. It has been said, though, that singleplayer or a "bot mode" would be a nice-to-have further down the road.

That does sound pretty amazing! Buuut, I was pretty awful at MWLL. I do wish you guys all the luck in the Inner-Sphere, though!