Experience some of the fiercest battles of WWII across North Africa with Mare Nostrum. Building on the realistic, tactical game play that made Red Orchestra: Ostfront 41-45 a fan favourite, Mare Nostrum lets players battle it out in an all new theatre of war. Featuring British, Australian, German and Italian nations, choose from a range of authentic weaponry or crew 1 of 10 fully realised vehicles. With 8 different battle environments the game play is varied from gritty street to street fighting in urban surroundings, to all out tank warfare in the open desert. This is North Africa, but not like you have seen it before. On the 17th October 2008, Mare Nostrum became the first, third party game MOD to be made available on Steam.

This time we have news of a big update to the mod, with the full details on the website! As always, a quick summary here, we can now proudly show off some of the new armor (and other vehicles) that we have been working on. For some more information, we also have the latest copy of our in-house paper - the Tunis Telegraph for your perusal.

Hello and welcome to the first media update since the release of our public Beta. Since we last had an update a lot has happened and we think that this media release will be one of our best yet.

When most people think of the North African Campaign of World War II they think of mass armoured engagements, so it would only be fitting that we reflected that in Mare Nostrum. With the arrival of some new team members the armoury has been growing at a rapid pace and so we are proud to announce some of our most recent projects.

The Matilda Mk II, Valentine Mk II, Vickers Mk VIB and Panzer II AUSF F are now all in game with completed animations and code. We also have a newly finished Fiat 508 C.M. which we hope to have drivable at some stage too! 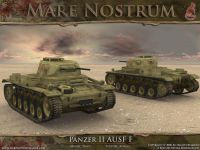 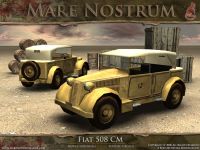 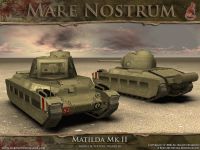 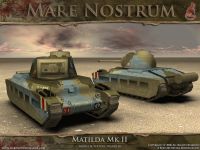 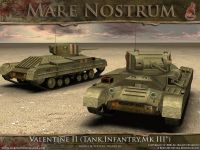 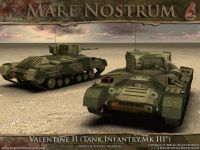 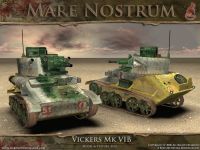 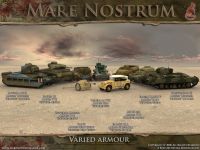 Our Tunis Telegraph newspaper also makes a welcome return this month after an extended absence. This month is a bumper edition with 16 pages of news, gossip and media.

For those entering our mapping contest be sure to check out the campaign and vehicle timelines as they should help with inspiration and in planning your maps. There is also some valuable information inside regarding testing Mare Nostrum so head over to the back page!

Excellent update... very well done newspaper, good modelling and some nice texturing... should be a good next release...

Oooo that is a corpious amount of wonderful vehicles you have there. And kudos on the newspaper when will I ever get the time to finish it.

The models are great! I like the Fiat 508 C.M. History most.

Thanks guys, plenty more to come in the coming months. :)