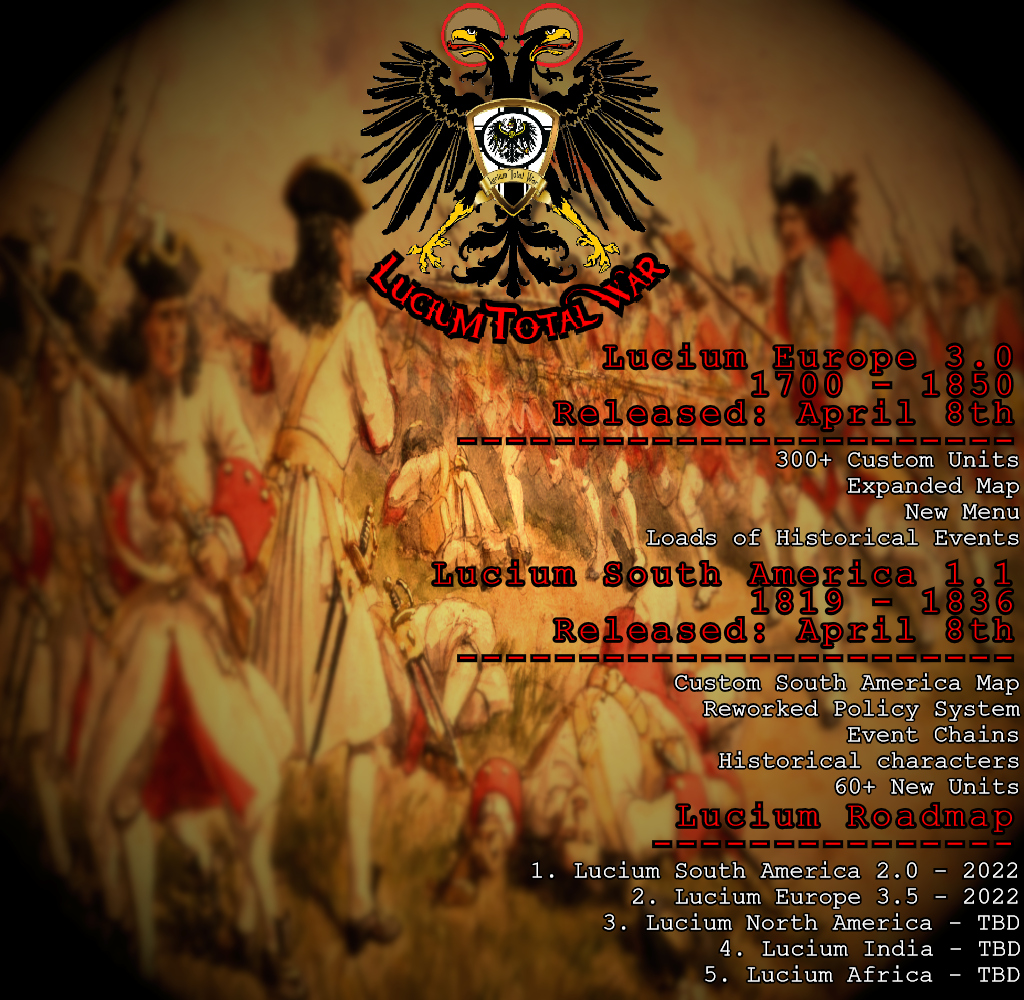 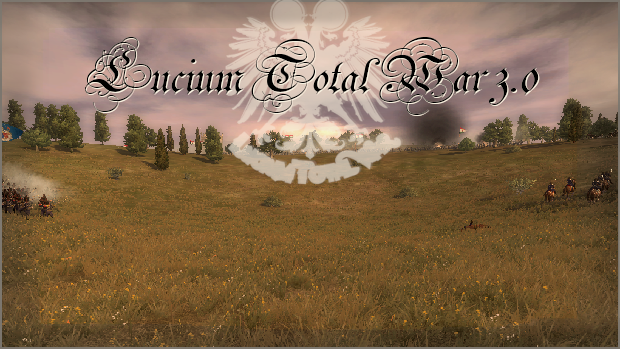 The Lucium Total War mod team released the first Definitive Edition of the mod, including a South Americas campaign, on the 12th of November 2020. Since then the team has been totally dedicated to working on an update we have colloquially called "Lucium 3.0" for the sake of brevity. This update, which initially was simply about bringing the Europe campaign up to the level of the South American one, turned into a total overall of almost every aspect of gameplay. From the main menu, to the faction select, to the map, to the factions, to the units, to the events, to the scripts, to the formable nations, and to the emergent factions, Lucium Europe went from playable and vaguely fun in 2.6, to far exceeding the quality of the already great South American campaign in Europe 3.0.

Lucium Total War began work in August 2019, and has been worked on every single day since then, through global pandemics and wars, we've worked on Lucium haha. And all that, with releases and updates coming roughly every 6 months. Here is a run-down of the releases previously to this, as I assume almost none of you have been following the mod from the beginning haha:

Now something you might notice when looking at these release dates, is that we have gone a very, very long time since our last release. This just goes to show, how much time and effort we have put into this update. If you played 2.6 and have downloaded the newly released 3.0 now that it is finally out, then you can most definitely see the difference. A full list of changes exists in the install itself within the same directory as the launch file if you'd like a list of that also. 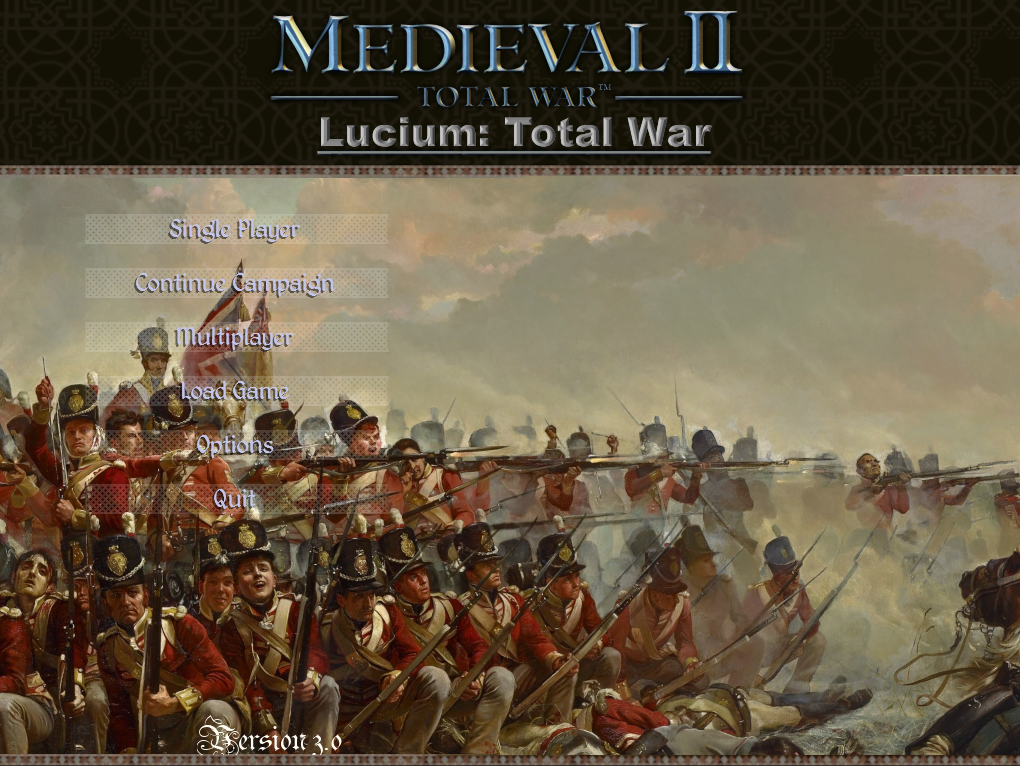 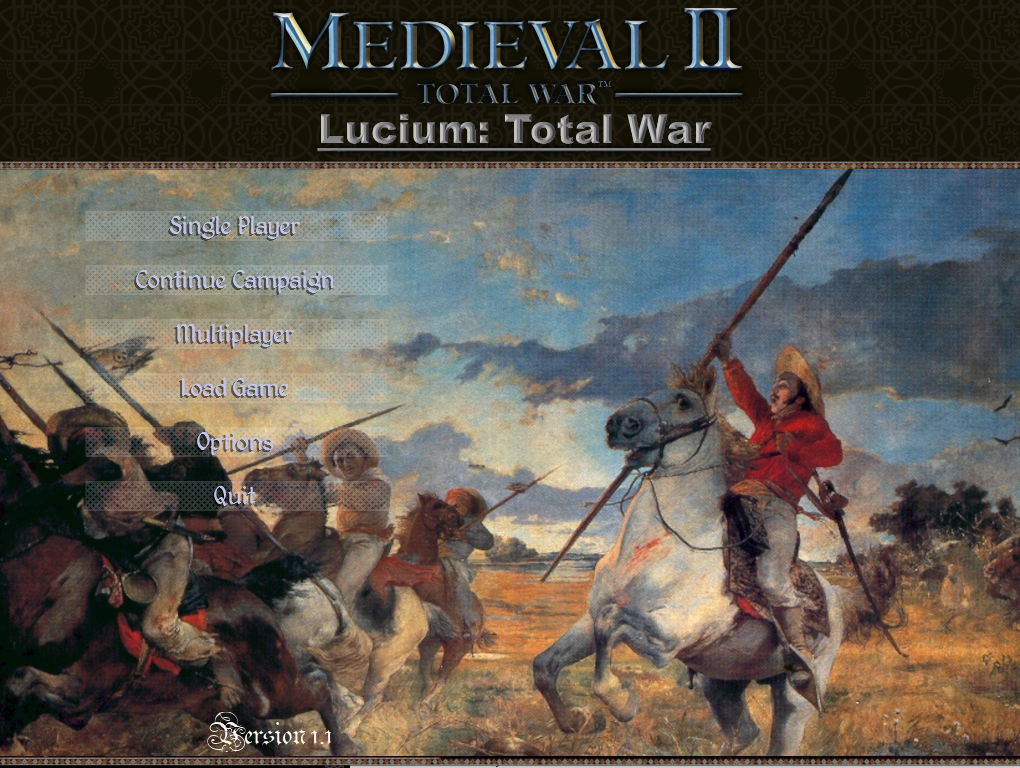 Due to this update being so large in scale, we added things such as a new menu, nationality traits, new borders for building cards, new artillery pieces, etc, which needed to be put into the South America campaign now also. This is where the update 1.1 comes in for that campaign, and despite it not being the massive update to South America, featuring its very own map extension and new factions like in Europe, it still has changes that make playing it more enjoyable, and we hope you agree with us on this. 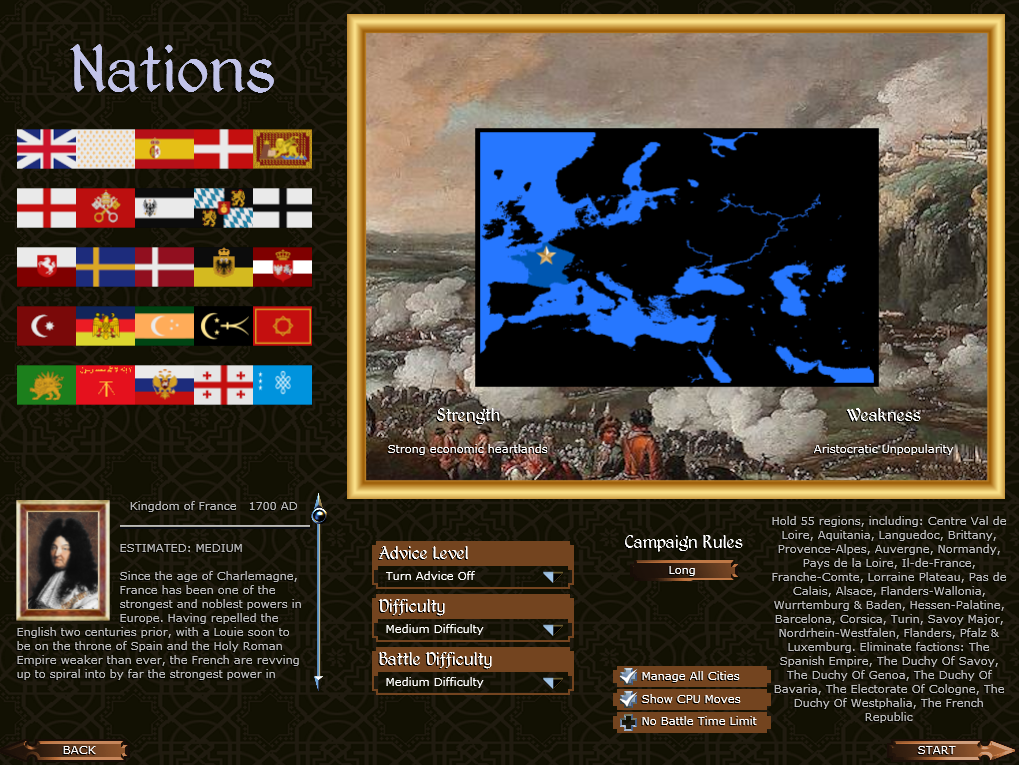 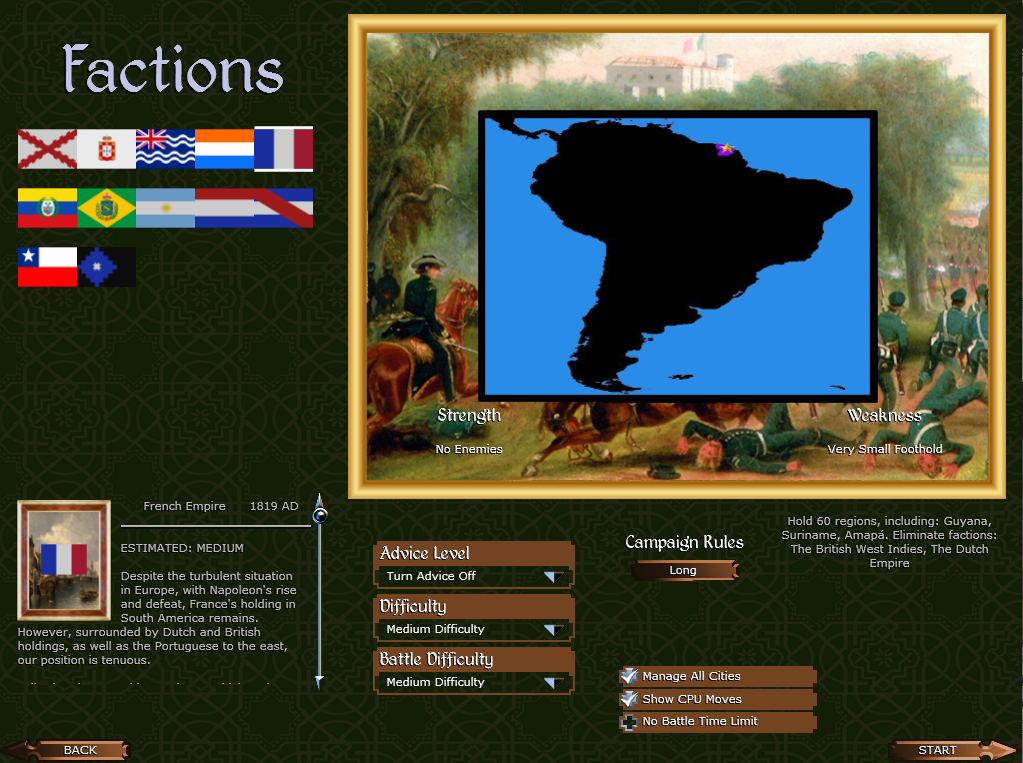 The team would like to thank you all wholeheartedly for following us along the way. And if you have only just found out about the mod, or have only been here a few weeks or months, we thank you as well. As if we didn't get the kind words you all say, as well as the constructive criticisms, we wouldn't have been able to make a product that anywhere near as many of you enjoy. The fact that we have made something that you all feel so positive about makes us all happy, and we simply cannot thank you enough. I will end this with a list of the members of the team who worked on the mod, who all hope you enjoy your time playing the update that we spent so long working on.

Thank you for following the development of Lucium Total War. 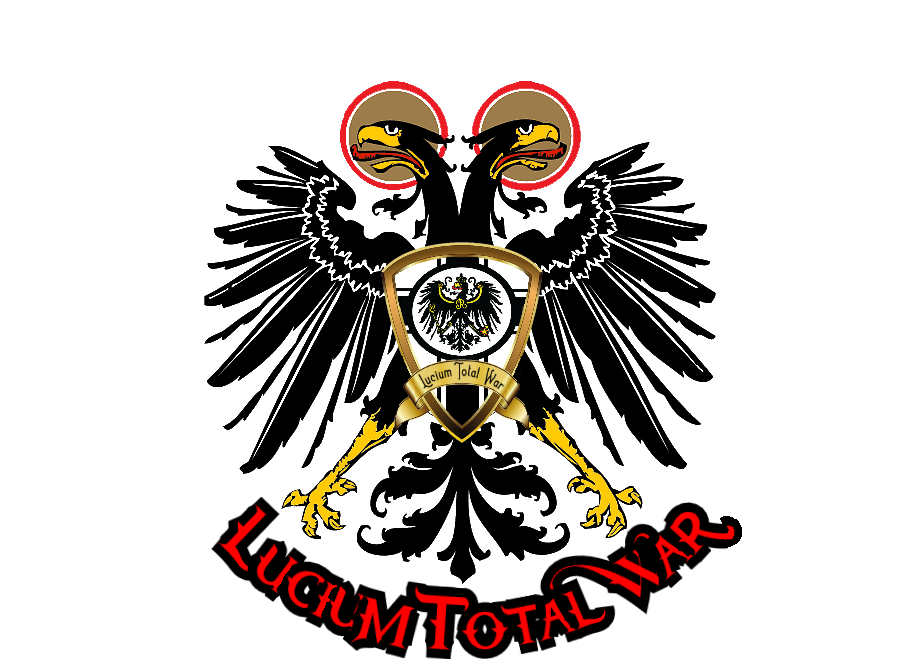 How to Install the Latest Version of Lucium Total War

The official video on how to install the latest version of Lucium Total War.

The Final Stage before release...

A basic overview on how far we've come with the mod's development and how close we are to release.

Welcome to Lucium Total War 2.6+1.0. From Argentina to Brazil. From Prussia to the Ottomans.

"Century of Colors" - Unofficial Borders Submod (FOR 2.5!) by La Corazon

"Century of Colors" is an unofficial submod for Lucium Total War that aims to enhance the visuals of the mod for those who prefer a more "Vanilla-Style...

The (hopefully) final update to the europe campaign. Check out the corresponding article for list of changes! The patch is NOT included.

Been playing the Europe campaing and the growth is too slow, yet you go from absolute bankrupcy to millionare in 40 turns. Would be nice if you could have some bonus from colonization atleast in an abstract way (as the map only includes Europe). An America/Europe campaing would be godly too.

If you want ideas for the balance of gunpowder check Thera Mod with the faustians/spanish, feels great to play them

--BALANCE
1. Pikemen are too strong in melee, they anihilate units very quickly with their vanilla attack animation and high damage, their attack stat should be reduced to make them more defensive, makes for a more natural progression to pure musket

2. Ranged infantry have too much ammo, you are never forced to melee

3. Muskets shouldn't have that varied missile attack, it makes no sense, also their kill rate (due to their accuracy) is too slow, and the fact that they try to shoot like archers makes it even worse

4. There are line infantry units with horrible melee stats, they are just better musketeers at that point, its also feels unbalanced how varied it is between units with the same name but from different faction

5. 1 unit cap doesnt feel right, forces you to keep recruiting a unit and paying their mainteance if you want to replenish your forces

6. Sieges would play better if all maps were like the campaing fort (like how Empire Total War did it)

--ACCURACY
1. Artillery shouldnt have exploding ammo until late game, you could make it only for 24 pounder. Also why make the renaissance cannon a crappy mortar instead of a bombard

2. Late pikemen should be avaible from the start and then removed with an event.

3. Walls should have cannon/musket towers instead of archers

--BUGS that you probably are aware of
1. Some units with bayonet have the spear+shield animations,
2. Grenadiers throw (shoot?) grenades from their almost textureless guns
3. artillery soldiers have guns that don't shoot, why not give them swords?
4. some faction generals have no weapon model, they strike with their bare hands

As my good friend Benisen said, we are aware of all of these. Battles are not the main focus of Lucium, and so thus far these have persisted within the mod. They will be fixed for the next released version. (aside from the ones where we'd need a battle map modeller)

1. I don't think so.. They're quite easy to kill off from distance and even late units can wipe them out in melee.

3. Regarding archer firing.. Yea That's mainly because of engine and terrain so they kinda fire like archers altough I may be wrong..

6. Can't do anything. This would need a battle map modder and those modders are sadly quite rare.

Ya_boi can answer the rest.

Glad to hear you aren't done with the mod.

1. Main problem is in siege walls where they aren't supposed to use pikes (you could fix them going up there by defining them as artillery)
3. Vanilla musketeers don't do this so this should be fixable somehow
6. Im not sure how maps are handled but maybe you can make the game use the campaing fort map for settlements in some text file.

Also i see there are "riflemen" units with winchesters, any plans to include a cannon like the armstrong gun?

1. We cannot prevent units from going up walls. All units that are dismounted or not attached at that point to a piece of artillery can ascend walls. This includes cannon crew that is not attached to an artillery anymore.

2. Indeed, it was changed to do so in order to counteract the effects of Muskets thinking they can fire over a wall, but instead firing straight into that wall. We could not find a way to stop the AI doing this, and so nominated to make them actually able to fire over that wall. This will however be changed, due to immense popular demand.

6. We cannot do that. Changing the battle maps would require a battle map modeller as stated by Benisen.

We have a form of the Armstrong Gun in the 6-Pounder already. Aside from this there are no plans currently to expand the Artillery roster.

Looks like a good mod but is there a chance that since the mod starts in 1700 that Scotland and England could be seperate nations in future since they didn't unite until 1707 be nice to play a Scottish empire as well.

They had the same leader as England and were united on all policy, both domestic and foreign, so that is why there is no Scottish nation. There is also the fact that the faction limit does not allow for it.

it's decent, but i don't feel the hype. middle east factions are largely dissapointing and samey. South America campaign is better but i feel alot of the textures are inconsistent. You must've removed the "gunpowder unit" line in export.descr.unit for azabs and a couple other units because they literally fire straight up into the air. It's a pretty good mod tho nonetheless it clearly has a ton of potential.

As Benison said, if you could make a more detailed list we would be very happy to look at it and take it into account when we change things for the next update.

I agree With middle east and also factions, textures and models. The issue is that all of the units are temporarily borrowed from other mods.
I'll check and test azab units and talk to ya_boi.

Feel free to make more detailed list of issues with units and factions.

Awesome concept for a mod.