Around 200 years are gone since the Queen is dead. Well since the USM is setting up big bases on Na Pali and supporting the Nali with Technology, the Skaarj Empire is forced to develope a way to grow pupae half biologically half synthetically. Through this abnormal progress are they able to grow mutated skaarjs with extraordinary gen-pool. Those special skaarjs are "produced" only for 1 reason: to destroy human and nali in 2 ways: Invading on the one hand the earth and na pali with the new race and on the other hand... in a different time. The empire developed in many years of researching an Time-Vortex that causes an controlled black-hole with enough anti-matter to get a Time Portal . First simulations with the vortex are successful. Not much time passed until the skaarj were using the Vortex in real space. They send a small fleet somewhere near Na Pali. The vortex seemed to work... but suddenly does the forming of the black-hole get outa control. A time anomaly was forming and the fleet was destroyed. Both, the USM(now do you come into game, you're an major on a USM ship) and the Skaarjs are sending control troops to the accident, such an huge visible anomaly in space wont be unseen for long time. When the ships are arriving starts the skaarj ship an attack on the USM ship until the anomaly seem to colapsing... but suddenly a strange kind of starship appears using unknown technology... The unknown ship is attacking both ships instantly. You and one you soldier are escaping from the ship flying down to Na Pali. You see your ship exploding... After crashing in a forest on Na Pali do you search for the closest USM Outpost. On you short way through some villages did you read about a prophecy called "The End of Everything" in an old Nali book. Is there a connection between the anomaly and the prophecy ? The Skaarj wont spend much time until they come back with a fleet to get at least Na Pali. But they're more open questions, why did the black-hole got out of control ? What role does the unknown species play ? Why is the USM Coop. so interested on Na Pali ?

It's not the best story, but we give the player the freedom to interact much more in the Unreal Universe, to drive Vehicles, forming (of course with some kind of story line, even if I broke up here) their own experiences and traveling to other places outside of Na Pali. There'll be levels on the Skaarj Planet, the Krall's Home, several Bases of the Mercs, and the 20 new races...

After a longer delay in that we didn't post news here about LSoNP do we have some news relating new Member Additions, new Pics, Features, new Support-Band, a Interview ... 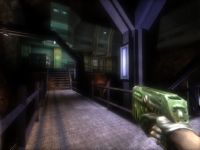 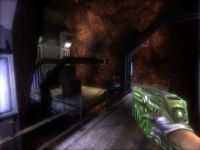 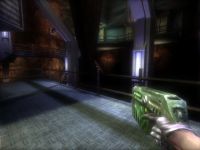 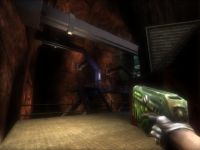 A collection of pics of a cave part inside the humanbase. 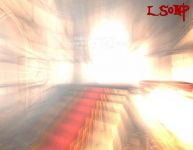 Working radial blur for the UEngine1.

Interview
An interview about LSoNP has been released at www.unrealsp.org, check out the news.

Additional Stuff
- the Band "Leaves Eyes" will provide 1 Song for LSoNP
- expect a big Main-Trailer around summer/autumn 06
- LSoNP will definitly have a Multiplayer Part!
- first concepts of new races are going to come out soon

Currently the news are coming around a bit fast^^ FXD|CWF has implemented fully functional Distance Fog in our own OpenGL Render. It smoothly fades out...

USU is dead, long live USU... Yesterday it happened, because of a minimum of Developers and internal differences the great UT99-SP Mod "Unreal ...

With 1 day delay the video has been uploaded. It's just short and shows a flyby through a tiny temple where the effects are inside. I apologize for...

We're preparing a short Particle Tech Video showing many different particle effects in a sort of "gallery"-map. Expect a video within the...


As somebody still may have not yet recognized:

Most of it's core features live on in the Project "Unreal Tournament SDK", which is present at moddb too (moddb.com/mods/utcommunitysdk)

Cant anyone ever get the abbreviation right? No such thing as USM.

Awesoem Work! I hope you can also add some friendly NPCs in the mod, preferably some Human Marines.

it is dead? if not, it will be soon? I really like these effects...

As somebody still may have not yet recognized:

Most of it's core features live on in the Project "Unreal Tournament SDK", which is present at moddb too (moddb.com/mods/unrealtournamentsdk)

so looking forward to play this mod what a shame

"After a long Time of Team inactivity we closed this Project. Thx at all who supported us. At the moment it doesnt looks like for a comeback."
From official site

yes, it LOOKED (past tense!! oi oi) great, LSoNP has been cancelled since months now, because it was too ambitious and the lack of internal communication, but there's an Extension Pack/SDK containing the new engine stuff. Just look for "UT99ExtensionPack" here or at google.