Our goal is to bring into focus the Legacy Era, but more specifically the Second Imperial Civil War. Play as either the tyrannical Krayt Empire, freedom-seeking Galactic Alliance Remnant or the obscure Confederation Revenant. 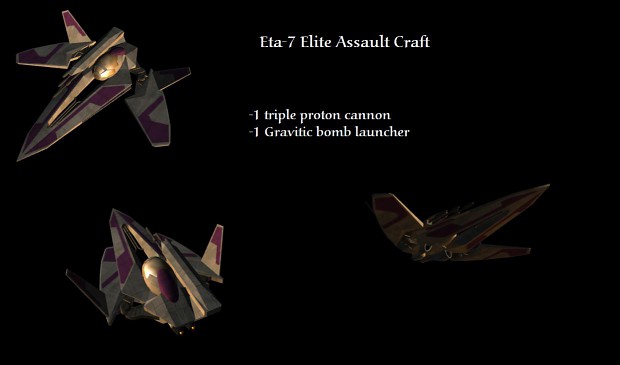 What was wrong with that other starfighter?

It looked too similar to another model. This one looks more... Starwars.

you know, I was going to actually suggest this one, but I thought the rage fighter looked even cooler

Very nice, can't wait to see it in action

yea it is cool and I can sent you more eta models if you want
and you dont need to call game legacy era mod it can be after legacy era mod becayse you will have much new units and confederation so there you have more space for new units, heroes...

but when does the legacy era end, as of yet it hasn't

Kitbash with parts of the V-Wing? Anyways, looks great

Nice!
Melikes anything with VG.
:D

a successor to the Eta 2 interceptor? Awesome!! you guys get thumbs up from me :D

After that little mix-up of models and such, I've found a new one to solve the issue. The description is adjusted where needed.

The Eta-7 is simply put, the most advanced and most powerful fighter-bomber in the galaxy at this time. Its weapons systems are extremely deadly and efficient. This is a dual purpose fighter/bomber for the Confederation available at level 5. It has an armament consisting of 1 triple proton cannon (which can be fired in beams or bursts) and 1 gravitic bomb launcher. Gravitic bombs are immensely powerful weapons that can be likened to the resonance torpedoes utilized by the Sun Crusher-which is where the bomb's design comes from. All of these factors mean that this craft is VERY expensive-but not invincible. If you have to fight these, watch out!