Originally a 2008-2009 mod for CryEngine 2 based on Jurassic Park. Rebooted to be a standalone UE4 virtual tour of Isla Nublar / Film Sets, serving the double purpose of demonstrating my skills for my portfolio, and simultaneously sharing the work with fellow JP fans to enjoy.

If you enjoy my work, follow me on ArtStation: Artstation.com
There is also a Discord server & a Twitch stream.

Doing big updates for my portfolio, and I decided revisiting the Jurassic Park stuff was good for several reasons. I will be releasing my new updated models & environments on a standalone build with Unreal 4.
This will be interactive environments that you can explore. I am not promising a game like last time, because that is too big of a promise to keep or commit to, so for now this is a virtual tour of Jurassic Park that you can use with your VR headset, and if I feel like it after, maybe more, but this is about updating my portfolio & exercising my independence, and I'm happy to share my work with you as a explorable world in Unreal 4. I have not created an Unreal indie game page yet, so I will be using this mod page initially.

So as I said, I'm doing this for two reasons. Firstly is my portfolio: Artstation.com
Secondly, to tie up some loose ends, really enjoy the independence that I have now, that I didn't have then, cause back when I was doing this mod in 2008, not only could I not program, but my 3D modelling skills were also still in their infancy, so I required help with just about everything, I was way too dependent. These days, I don't need that kind of help, and so revisiting this project with my updated skills & finishing things that I previously could not, feels really satisfying. Plus, making Jurassic Park assets is fun & a great addition to my portfolio :)

So, to start off, I redid the Raptor Pen, completely from scratch. 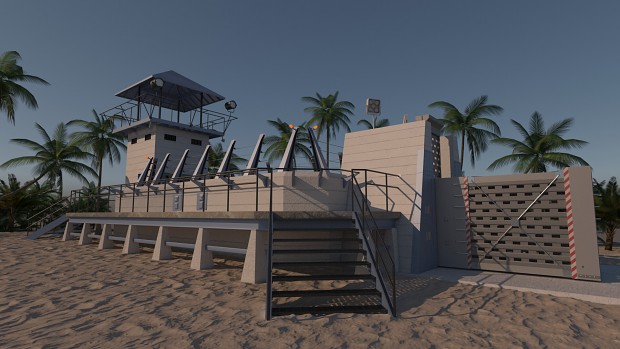 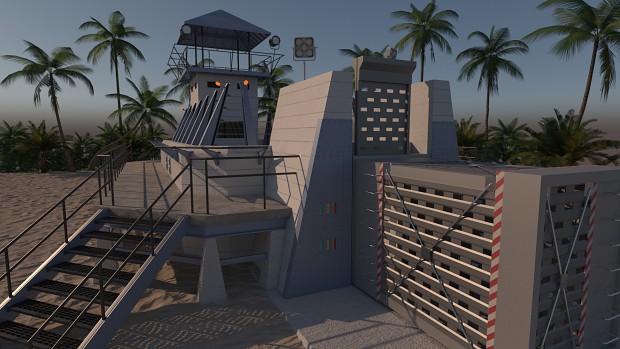 Why from scratch?
The original model was made in Hammer, so it wasn't even a model, it was brushes. I was rubbish at 3D modelling back then. Because of that, the old model was later touched up by another artist. I have a problem with that, because I want the Raptor Pen to be my own work, so that alone was reason enough to redo it from scratch, but the old model was also full of inaccuracies. So now there is a better model, and I did it by myself.

So what's next? I am doing an update to another old project, giving it a quick facelift for Vray & UE4.
That will be a couple days at most, with that one, I just need some updated renders/screenshots, nothing crazy, but after that, I will be focusing more on the Visitors Center.

I also started on a redo of the exterior of the Visitors Center. The old model was a collaboration between me and John Harvey, and it was also not accurate, so I'm redoing it as well, because this is about my updating my portfolio & exercising my independence. 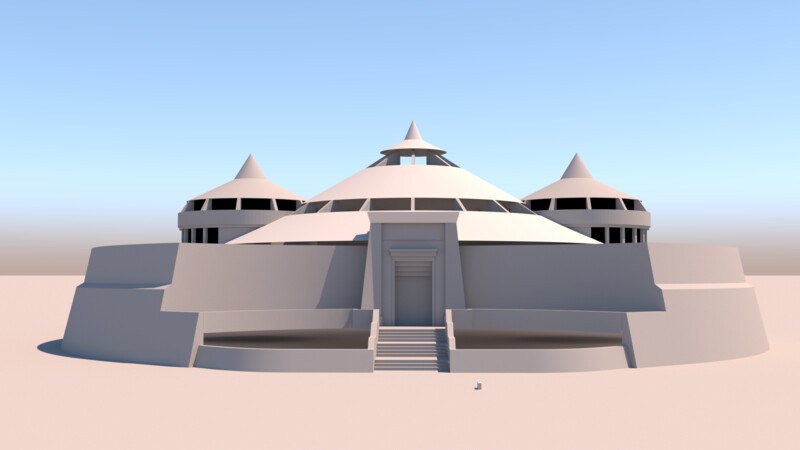 The interior on the other hand is almost entirely my work, so it doesn't need to be redone much. There are some proportion adjustments I've been making with the Rotunda, since my old model was disproportionate, but I will be finishing and detailing that next. The interior and exterior of the Visitors Center were separate sets in the movie, and they don't line up, so I will be treating them as such, and making them separate models for accuracy, so that you can enjoy both sets as you remember them. Later on, I'll merge them, which will require modifying the design/deviating from the film. I'll give you guys the option to choose which Visitors Center you want to tour, so you'll have 3 options.

On top of being able to make everything myself now, I also have much better references in 2019, so I don't have to deal with the inferior picture quality of a 2003 DVD release of the film this time.

You have logged into ModDB and you check your updates, and suddenly there is an update from a mod from 2009 that you thought was dead? What is going on?...

After rounding out the best of 2007, we're ready to present the results.

The original demo for the mod before it was cancelled and archived in 2009.

I think this says it all (Jurassic Park Demo for Crysis. To install extract files to the Crysis Game directory and play in the editor. Map includes Visitors Center, Raptor Pen, Jeep and two characters from the film. This is to give the community something,!!! NOW that the mod is officially DEAD!!!!! Therefore there is no gameplay as such and there are some bugs but you can take a look around the map and explore what is there.)
( its all a quote)

this is dead? or holding?

Me too, I had Crysis but since I don't see Warhead sold individually anymore I had to get the Maximum Edition. And all that for a mod that would never come to fruition. Tis a sad time in the hearts and minds of Jurassic Park fanboys everywhere.

Check out the downloads section;)

Its certainly not dead! The film-franchise may be dead! But after 17 years there is still a huge fan-base for the first movie, and all of them would love to see a good adequate game be made. Look at Ghostbusters, two films, still a great franchise and after 20 years they make a game wich looks and feels just like the old movies and is a great success! Maybe this will happen to Jurassic Park one day too?

And yeah, deciding to make a JP-Game without being a true passionate fan and just because you couldnt create something on your own, was a bad idea!
Good mods take years and you never get much credit, look at Out of hell, at Black Mesa. Did you really expect to finish a franchise based mod in less than 3 years??? You had the wrong hobby, dude!!!

This is what happens when people have an idea but dont have the slightest idea what they are putting themselves into realizing it!

Sadly you didnt just wasted your time, put also our time. At least you lasted longer than that Far Cry-Mod!

So there again only Jurassic Life remains as a hope for JP-Fans. Its the oldest one and even if its graphically not that good and taking forever to complete it, at least they dont abandon the project! And its Single-Player.

But maybe there will be someone who is willing to finish the unfinished models and at least release one map with all the important JP-Sets and a few dinosaurs with primitive AI, even with no gameplay at all. So maybe you just could release all the work done so far for this case?

We knew exactly what we we're letting ourselves in for. there was a time when progress was going great but we had many team issuses, I won't mention names but there were alot of problems. They're doing their own thing now and thats fine and I wish them the best of luck with their work. We spent nearly 4 years on this project and is a shame it ended this way. Most of the content I made from scratch myself(dinos, characters and map, some of the VC), if the team had stuck together it would of been finnished by now, but there is only so much me and chris can do on our own especially after all the **** that went on. We are passionate JP fans and Noone has put as much into this project as Chris and I, the outcome may not be desireable and we're of course dissapointed. I don't consider this a hobby! It is my career and I earn good money for it now(this project was for my port folio)and we I have plenty of ideas, you will see in time(our new project is a fresh IP). I may import the assets to UDK somtime if I have some free time, it'll be alot easier to get the dino working in it and it will look just as good but im not promising anything. We have learnt alot and won't make the same mistakes again. Our new project is comming on really well and I look forward to the release, until then you won't hear much from us;)