Jazz Jackrabbit 2 Plus (JJ2+) adds countless features and bug fixes to both Single Player and Multiplayer gameplay within JJ2, and is used almost universally by most serious players. It has much better network code than the original game, adding console commands to online games, fixing most major game-crashing errors and connection problems, allowing permitted clients to log in as "remote administrators" in someone else's server and control the gameplay, and adding several new multiplayer gamemodes. It additionally fixes or enhances many of the events in the game, and allows level designers far more power than in regular JJ2 through the addition of an easy-to-use scripting language. JJ2+ takes everything great about JJ2 and adds so much more on top of it; it is truly a must-download. JJ2+ is distributed under the MIT license.

The latest and greatest major Jazz Jackrabbit 2 Plus release! October 2013 brings with it lots of great improvements to JJ2, including the ability to aim bullets using the mouse cursor and change weapons with the mouse wheel; brand new textured background modes, with fifteen predrawn background textures that can be easily plugged into any level using any tileset; access to redefining object behaviors and HUD elements for script-writers; a modestly improved online spectator mode; a new harder-than-hard difficulty mode for single player games; and lots and lots more! Besides all that, JJ2+ now has two awesome, Plus-exclusive splash screens drawn by our awesome community members! 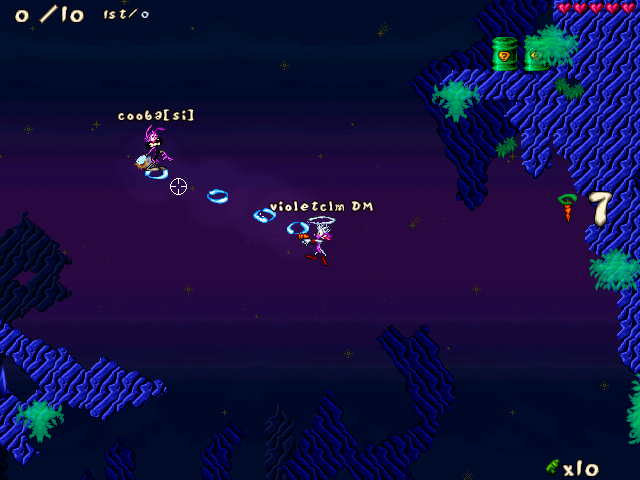 This is also a great update for bug fixing, both in our own code and of so many long-standing native JJ2 bugs that we're pretty sure we fixed some bugs nobody had even ever known existed! Just as a sample, ammo pickups, bouncer bullets, and other objects are now better synced among clients online; buttstomping enemies doesn't remove your invincibility; falling off swinging platforms is now much less likely; fastfire and ammo pickups and blaster powerups are drawn using the correct sprite for whichever player is viewing them; muting other online players now successfully mutes messages sent using the "/me" command; and again, lots and lots more.

Also, grab our selection of example/tutorial maps over here!

One of my all time favorite platformer is getting some love !!! I definitely want to re-install it !