Interstate '82 is a Battlefield 1942 Modification based on the original game for PC. The mod was released back in August 2003 and transforms BF1942 into a semi-modern day auto combat game. Pick your classic car and race around weapon mounted cars, this isn't your every day demolition derby!
There are two teams or player models to choose from, the Kingpins and the Vigilantes each with weapons and vehicles that will make you forget that this has any connection to the original WW2 shooter.

We aim to update the content of the game, as well as adding new stuff (models, textures, code etc)
Upgrade existing maps (both original and custom made by community members) to todays standards (removing floating objects, generating shadows, and improving overall quality)
We will also add a few additional maps to the new release.

The original dev team of the interstate 1982 mod

Thanks for voting and helping Interstate 1982 on it's quest to become the 2022 Mod of the Year. You are now in with a chance to score some free games from our #modlove collection. Help this mod secure more votes by embedding the widget (or link) we have included below on your favorite sites.

The Interstate 1982 Mod invites all BF42 Players to join in on the 18th December all day event Uberdaciousness... 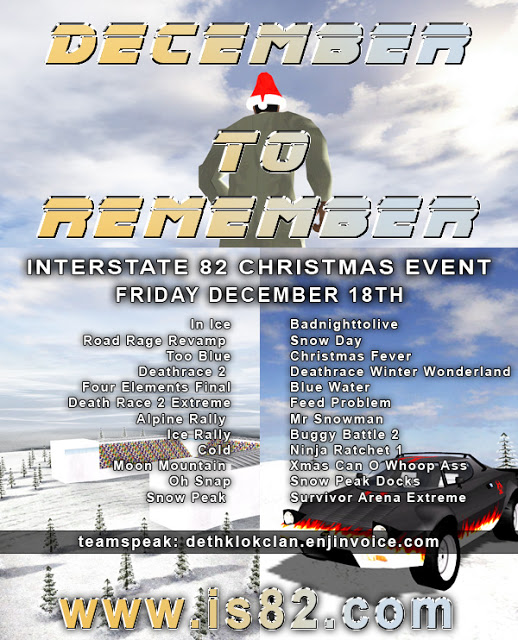 What do you need to play is?

And we the Fans say thx to you for the comming IS82 Christmas Event 2015!

Interstate 82 has been updated to work with the new free version of Battlefield 1942, available on origin. Visit www.is82.com for the latest download!

Shes very much alive and unfinished.

Great to see content still coming out for this mod, was great fun back in the day!

No it isnt death, we have play it a couple of days ago 7 People. It makes lot of fun.

There is a solution against the gamespy shutdown. You can play all the mods online and the server will be back.
You need at first the basic game BF 1942 –> 1.61 Patch (only if you have the release 2002 edition) –> Online Patch 161b (Anthology) –> Origin Players: Team-simple.org or for CD Players Team-simple.org or for Origin Players: Team-simple.org (thats for find back the server in your Gamespy Browser, fix your widescreen, and give compatibility to Win 7/8 Users) –> go in the bf1942 folder and overwrite the old bf1942.exe with the new one –> right click on the Desktop BF 1942.exe –> Properties –> compatibility –> set start as Win 1998 (v) and as Admin (v) –> click ok thats it you are back again online!

is BF 1942 still free to download/play on origin or did they put a price tag to it already?