*OUT NOW* This is a New Mod I have made alone based in Ireland from the year 657 AD onwards. I chose this year due to the joint High-Kingship between Blathmac and Diarmait. I have had to take some liberties in areas, but overall I have tried my best to tie it as closely as possible to the history of that time. Featuring 24 playable factions (all Irish) this mod hopes to shine a light on a really interesting part of history that isn't really focused on as much as it should be. I also want to clarify that I have used models for units and the campaign map from both the Last Kingdom Mod and IB2 Mod. This is because I have not the tools or expertise in making models, though I'd like to. So I have utitlised the models, changed a few textures and of course names of units etc, with no intentions of disrespecting the other two mods at all.

The Ulster units are available in any faction marked with (Ulaid) after their name. This includes units such as Ulster Spearmen, Ulster Kerns and the Royal Branch Guards etc. Yet if you play as either the Cenél Cónaill or Cenél nEógain who are both part of (Ailech) they can also have some Ulster units, as well as the two factions under (Airgíalla). They on their own have a few other unique units specific to their over-kingdoms but take some units from the Ulster roster.

The Connacht units are available with the faction marked (Connachta) after their name. This includes units like Connacht Spearmen, Cattle Raiders and Gamanrad etc. Yet if you play as the Uí Briúin of Bréifne they in fact get both Connacht, Ulster and some Uí Néill units due to their position and relations with the three over-kingdoms surrounding them, which gives them a massive advantage. The Uí Maine as well although are techinically under Connacht use units affiliated with the Shannon factions, such as the Uí Failge and the Déise Tuaisceart.

Munster, marked with (Mumhan) after the faction name, is in fact divided into two main rosters being the Eóganachta and the Déisi:

Specifiy mainly with cavalry and have Mounted Bodyguards unlike the rest of Ireland who use Arras Noble Swordsmen. These factions also can use Déisi Kerns as vassal units (recruited using the vassal building), due to the Déisi Muman and Deisi Tuaisceart being under Munster.

Have the best Kerns and really effective Swordsmen. Being vassals to the kings of Munster, their downfall is that their kerns are easily recruited by the Eóganachta and so they are hard to contend with. But the Déisi Tuaisceart lie on the Shannon, which gives them a slight advantage of recruiting Shannon units as well and indeed Connacht Mercs in the North.

The Uí Fidgenti, Uí Failge and Osraige usually are more affiliated with the Eóganachta roster but indeed have some of their own units, Osraige taking from the Leinster roster and the Uí Failge having some Shannon units.

Marked with (Laigin) after the faction name, the Leinster roster comprises of a nice variety of units such as Leinster Clan Warriors (spearmen), Dumnonian Archers (from Brythonic influence), and the Ríglach as Noble Swordsmen.

The Southern Uí Neill comprise of the two factions Mide and Brega who are the most powerful Kingdoms in Ireland, due to Brega being the High-King and Mide being a contender to the high-kingship. The Northern Uí Néill or (Ailech) comprise of the Cenél Cónaill and the Cenél nEógain, which with other Uí Néill factions have a roster comprising of Uí Néill Clan Warriors and Uí Néill Champions. Brega specifically get Teamhair Archers who guard the High-King.

Obviously Dyfed has its own unit roster, but this faction will NOT be playable for the sole reason that it is meant to be an exterior threat to the east coast of Ireland etc. Dál Riata also have a unique roster comprising of Dalriadan specific units and Pictish Units too.

In terms of Irish Factions I am unsure whether I will add more - this will be after I release a demo version anyway, But what I defininately plan to do is to try and add Northumbria (due to their relations with the Irish Royalty and their incursions in Brega) and possibly add Strathclyde or the Picts - but this is all undecided and won't be confirmed until after the first release of the mod. 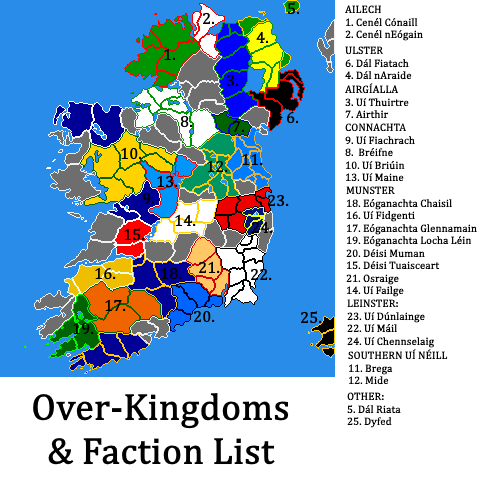 Thanks for Reading, I hope this outlined briefly the faction categories I have implemented into this mod!

What is being planned?

This essentially is to outline what I am to do with the Mod before and after its release. I haven't got an exact date yet, but I would hope to have a...

Demo Version includes a working campaign, but custom battles are not ADVISED in this current format.

Discord.com - New Discord Server link, nothing much is on it yet, but soon I intend to post updates and answer any questions etc. Feel free to join!

Will all the factions ever be playable? e.g. Dál Riata

I wanted to make them unplayable to act as an outside force for the campaign, but you can easily edit the descr_strat if you want to play as them - their base faction is hre.

Youtube.com - Here is a preview of the mod by Irish Medieval History - really good channel if you are into Irish History, check them out! :)

Looks like a great mod! I have not found any issues so far, however, I can will make new settlements at a later date. I like how each factions have similar variety of units and the general look really well. I hope there will be more improvements on this irish mod someday. Keep up the great work!!

QUESTION - If I am able to add a new faction for an updated version of this mod, would people prefer to see the Northumbrians added as an unplayable faction that spawns in the corner and act as sort of raiders, or would people prefer another Irish faction, which could be the Uí Liatháin, the Corcu Duibne, the Uí Chremthainn etc. ?

Let me know if what you'd like so I can plan on adding it if possible.

I would enjoy the Northumbrians, adding a late game challenge, like Mongols in the main game?

Well I've got 3 factions left so if I have 1 spare, I would definately do the Northumbrians, considering they did raid Ireland in this period. So I'll take that on board, thanks for the imput.

i dunno if this question is outdated or not but assuming that it isnt, I think that adding another irish faction would be preferable since this mod is for the most part an ireland focused mod. tho i do have to say that i havent really downloaded your mod yet since it would take a long time for me to download it(cause terrible internet connection) and i wouldnt want to waste hours upon hours trying to download this mod only to get hit by connection errors that would halt the download completion in its entirety. anyways long story short i wish the file is in torrent version so that it wouldnt be that bad to try and download the mod.

Thanks for the response, I’m working on a newer version anyway, so I’ll try and make it downloadable, but I am thinking another Irish faction would probably be preferable.