It all starts with a phone call...
Your playing as Ethan who receives a phone call before coming home from work. The phone call is from your friend Charles who lives in an old mansion, but when you pick up the phone, you hear nothing. You decided to visit your friend since you haven't seen him in a while but when you get there, the doors shut behind you.
Contains:
-Voice acting
-Atmosphere
-Good level design
-Creativity
-Customized entities
-Jumpscares (Very few)
-Story
-Puzzles
-Penumbra assets 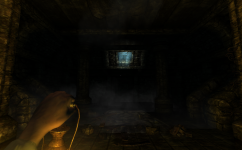 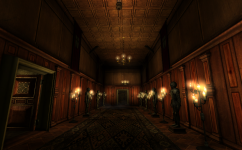 Hi. Haven't written one of these in a while.

So, as you read in the title, I am back. But not for long. My last article was about how the level editor was giving me crap and wouldn't let me finish the mod. Well, here's what happened after that. To put it brief, more problems arose, like levels not working for no apparent reason, problems with entities and models to the point where I got so frustrated I quit modding for amnesia.

And now I'm back modding for amnesia again. Why? Well honestly, because I want to see this mod done.

For the past four years this has just been sitting on my computer collecting dust. I tried modding for SOMA when that came out, but the lack of creative room and the complexity of the scripts diverted my attention from it quickly. I came back and played what I'd done of this mod every once in a while just for memory sake but recently I'd been thinking about the mod more and more. I'd worked so hard on the mod up until the point I stopped working on it, and after reflecting on it, I decided, fuck it. I'm finishing this junk.

I'm not back for good though. I'm only back until the mod is done. Once it's finished, I'm gone for good. I would like to start working on personal projects involving writing and music, a passion of mine I'm hoping to pursue in the future. As for progress on the mod, I've fixed all the problems, except for one (the first map keeps crashing for some reason) and I'm working on one of the final maps.

I've been working on this constantly since my quest to finish this, and I plan to change some of my original plans. I began working on this mod in 2014 when I was only 12-13 years old. Now, at 17, I plan to polish and finish it to the best of my ability. I also plan to add an extra little feature just so that not all my work goes to waste...

Unfinishable at the moment

The errors have prevented me from using needed material in order to finish the story.

While editing the story, I'm experiencing an often occurrence in errors.

After editing a while, when I exit the first map, the game closes.

Hey...I see the map is not released yet. I've been a Beta-tester for over a few years now and I love doing it...If you're interested in me testing your map and giving you a very detailed review in return send me a message :) On my profile there's also reviews about me if you're interested...:)

I'm also sorry for the author. It's always a tradegy to lose one download.

He didn't got invented...

so why that name?

The title might make more sense once you play the mod, but obviously it's not out yet.