Imperium Romanum
The Roman Civil War Mod
(based on DBM)

Introduction
This mod is a standalone version of DBM. It features 14 scenarios ranging from 88 BC to 275 AD: 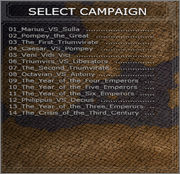 Please visit the articles tab above for a more in-depth detailed description.


Time Frame, Periods and Factions
Each scenario covers only a short period in history, sometimes just a year. The time-scale is 12 turns per year, so time is limited. The time frame is broken up into 3 ‘Periods’. Period 1 covers the scenarios 1 and 2, Period 2 the scenarios 2 to 8, and Period 3 the following scenarios. The Periods define things like city development, Romanization, and most importantly recruitment. The major change is from Period 2 to Period 3 (‘Post-Augustan’). In the early Periods your Auxilia are local units, which gives you a broader range of units but also causes logistical problems (you cannot retrain “German Auxilia” in Egypt for example). In Period 3 your Auxilia is uniform, what allows you to recruit and to retrain them in every corner of the Empire, but also limit your choices in light infantry and cavalry.

In a scenario there are Major Factions and Minor Factions. Only Major Factions are playable. These are usually the Roman civil war factions plus occasional foreign factions that play a key role, for example Parthia in Scenario 03. But in general, is this a Roman-centered mod, so don’t expect too much foreign factions to be playable. Minor Factions are not playable factions. These represent lesser states that did play some role in the Roman conflict, for example as Roman allies, as victims to Roman expansions, or as a nuisance you have to deal with.

Designer Notes
This game plays much different to other mods or M2TW Vanilla. You will not achieve much when you sit around, improve your towns and armies, mob up a rebel settlement from time to time and wait for the next AI faction being stupid enough to attack you. When the game starts you usually have plenty of armies and well developed provinces at your disposal, and you are at war with most other factions who are the same strong. So, this is pretty much a war game and you will encounter massive battles right from the start.

The Factional Moral should not be a problem for you because you usually win the battles against the AI (do you?), unless of course you prefer auto-calc. Keeping your Dux alive can be a bit more challenging (as long as you don’t hide him somewhere). I managed to lose “Octavian vs. Antony” within three turns, for example, because I had my Octavian being killed in a completely unimportant encounter with Antonian cavalry right after landing in Greece.

Keeping Rome in supply shouldn’t be much of a deal as long as you have sufficient funds because in most scenarios either Egypt or the Bosporan Kingdom are non-hostile factions, and each of them is able to provide you with four out of five ‘loads’ of corn. On the other hand, occupying Alexandria or the Bosporan Kingdom can cause serious trouble to the faction holding Rome.

Note that this mod is still pretty much Beta: I didn’t test each scenario with every faction. I didn’t encounter any crashes and the scripts seem to be working as intended. So, that’s what would be called ‘playable’. A first version had rather small armies with one real legion roughly corresponding one unit, larger militia garrisons and recruit times of three turns. This resulted in the AI making their family members and legions the garrisons, and marshaling armies of the militia; absolutely not what was intended. I then raised armies’ size to one historical legion corresponding with 8 units (4x legionary cohort, 4x auxilia, including cavalry and arches). I also reduced recruit times and militias. This finally resulted in the huge armies and massive battles I was looking for.

I hope you'll enjoy it!

FAQ
Why is it standalone?
This sub-mod not only adds additional campaigns but also changes a couple of things of DBM; such as different factions, a new EDB and a new EDU. Stock DBM would no longer be playable after installing this game over DBM. That’s why it has a mod folder of its own.

Why are not all factions playable and what about the missing factions?
This mod focuses on Rome and her civil wars. I not only had to remove some factions because I needed more Roman factions but I also deliberately excluded as much factions as possible from the game. This seriously speeds up turn times, and it drastically reduced the amount of work needed to compile one descr_strat (and there are 14 different of them in this mod). Making one of the Minor Factions playable isn’t recommended anyways because they are only rump factions, only implemented as far as the AI needs them to be functional but not in a way it would be playable, or enjoyable, for a human player. So, please stick to the Major Factions, they had been work enough.

Why does it end in 275 AD?
After the ‘Crisis of the Third Century’ Rome developed into what would be the Late Empire. Displaying this would require a new set of units, for example something like the units in IB2, and also new foreign factions. Religion would play a role, and so on. A post-275 version indeed would require another game.

Where are my diplomats?
In most scenarios, diplomacy wouldn’t make any sense (four guys fighting for the Throne can talk it out). Whenever diplomats are allowed they are pre-placed on the map.

Credits
The entire mod is set up on DBM. All credit for units and other non-changed material has to go there.
This mod is inspired by West End Game’s 1985 board game Imperium Romanum II. ASFAIK, West End Games no longer is active, but you find a PC version of that game under:
Vassalengine.org (search the internet for a rule book).

Thanks for voting and helping Imperium Romanum - Roman Civil War Mod (DBM) on it's quest to become the 2021 Mod of the Year. You are now in with a chance to score some free games from our #modlove collection. Help this mod secure more votes by embedding the widget (or link) we have included below on your favorite sites.

If using steam you can add the;
Play IR - The Civil War Steam.exe
to your steam games by going to the top menu in steam, 'Games'
then 'Add a Non-Steam Game to My Library...'
then 'Browse'
on steam usually;
•C:\Program Files (x86)\Steam\SteamLibrary\steamapps\common\Medieval II Total War\mods\Imperium_Romanum
Then select the required exe version
'Play IR - The Civil War Steam.exe'

(or the 'Play IR - The Civil War Steam.exe' if you have a steam version)

Full description of the mod that has been released.

This has now been superseded by a single exe file to start the game on or off steam. [Please await upload I have a lot to do at the moment] Adds exe files...

We need real download links or a torrent. You used mega.co.nz which makes you install malware to download.

And I don't care if it's 'safe' or not if they make you install a browser extension just to download I consider it malware.

Ive just been looking over this again, the download link was not added by me but by another in the development team.

I have the whole file on a single zip 2.7GB just under, I will try and upload it again here.

It was taking forever to upload and everytime it took hours and then failed. The next best thing was using mega upload to install it. All others had those silly lag things.

I don't think you have to install a browser extension do you? I think that's optional, I don't fully recall. And its not malware (malicious-ware as it doesn't do anything like that as far as I'm aware)

That link will hold the instructions and download link. It is also now in articles under Download the game files.

The download link has been on the linked page you can find it on the summery page. You need to use the mega one the alternative as that's the only one that works.

That link will hold the instructions and download link. It is also now in articles under Download the game files.

Where is the main file?

I'm uploading it its taking forever and keeps failing so I have opted to upload it to another site and then use the upload via a link option...