A huge compilation of the best S.T.A.L.K.E.R. Call of Pripyat mods. Graphics, sound and gameplay overhauled.

This is the full version installation of "I Work Alone".
Playing in "Master" difficulty is recommended. The mod is scripted for that difficulty.

No other downloads are required in order for it to work.
Download, uncompress the files and read the attached ReadMe-file carefully.
You may need to accept files to be overwritten in order to install this mod properly.

This is the complete list of features of "I Work Alone" ver.1.2:

* Hundreds of new high resolution textures for environment, items and weapons + some suits
All selected from Absolute Structures v.1.0 / Nature v.2.0 and S.C.O.P. Realistic.
All weapons in the zone now seem more used and unmaintained.
There is a large variation in the amount of corrosion and dirt on the weapons
depending on the background of the weapontype.
Military weapontypes are less corroted as they are better maintained.

* The VOG-25 grenade uses now the right Icon and Model

* AtmosFear v2.1
(with the only exceptions of Atmosfear: Blowouts and Fallout)

* All the carcasses and smell of missery has attracted aggressive flies to the zone.
You won't see them but you will notice them more often. Especially around lakes and swamps.
Be sure to find one around your face anytime soon.
They also may disrupt your sleep when you put your dirty sleeping bag to the test out in the open.

* The maximum weigth you can carry is lowered but you run slightly faster now
when not overencumbered.

* Range of the combat knife has been raised.

* All upgrades cost 25% more than vanilla

* You get paid less for artefacts

* More Recoil
No shooting from the hip. Recoil of all weapons are now more aggressive so that you need
to take proper aim and use the strength of your hands and torso to shoot with low recoil.
Crouching improves your aim in the optimal way. If you don't aim properly you will suffer great recoil
and weapon sway when shooting in bursts or fully automatic.

* Low Ammunition Ressources
Military forces has excluded the zone even further and ammunition
is now smugled into the zone in a less frequent basis.
This means that traders has less but more valuable ammo to offer at a raised price.
By helping the military faction in Pripyat you are still offered free ammo.

* You have been granted a better flashligth that illuminates the distances in front of you
even better that the last one.

* Your radio has been tinkered with to have stronger and clearer signals.
However, this means that you are also picking up small and weak portions of enemy radio chatter from your area. Some are related to their exploring. Some are related to their tactics.
The frequencies that are picked up are totally random and might be mixed.
Only the frequency of your own faction is clear and reliable.
It could be the secret of a bandit telling his comrade where to find the hidden gas mask
in perfect condition. It could be the radio whispering of an enemy sniper in the top window
of the building asking for the approval of his boss to take you out.
Who wouldn't want that kind of life saving signals?

* All upgrades available for all weapons (still requires tool sets)

* No weapon restrictions in safe zones

* Military knife, Binoculars, PDA and Identitycard will show up in your inventory,
you can't drop or sell them

* Tired of feeling sleepy when exploring the zone?
Now barmen in Zaton and Jupiter are selling stronger and more effective energy drinks
to burn off your sleepiness.
Don't use these if you are planning to sleep around the next corner.
Prices have beeen raised a bit because of the higher dosis of caffeine.
I might add that a constant mix between sleeping pills and energy drinks is a bad idea
in the long run. Seek a more natural day/night rhythm.

* There is two sets of knifes in the game now, one that is your standard issue
military knife and works just as the vanilla knife. Then there is the hunting knife
that the rest of the stalkers uses, it uses a weapon slot and you can sell them.

* The FN2000 can now use the silencer as default

*Main menu and loading screens has been redone in the concept of the mod.
They now include authentic and real photos of the zone.

*The HUD has been expanded to include a small compass and minimap
that helps you navigate within the exclusion zone.
It won't show enemy locations. Neither will it show dead bodies.
It will however indicate your friends and VIPs (like traders).
Still you will find a display of your currently equipped type of ammunition
as well as how much there is left.

* Cleared Stash Mod, places a small treasure icon map spot where you pick up a stash

* The Field of View has been widened to fit better with high resolution gaming and expand your view. The FOV is now 75'.

* Relations tweaked. Stalkers/Bandits no longer turn neutral to each other

* Zombied Stalkers reworked...removed their bleeding and tweaked the damage they take
when they is shot in different areas on the body, they don't heal as quick as before
but is more resilient against bullets. A good weapon to use if they come in a gang
is the Thermite grenade, frag grenade is also good but not as good as Thermite. They
are hard to kill with body shots, but with 1-3 head shots they go down.

* Oasis artifact will no longer reduce your hunger but it has better healing ability,
it is highly radioactive as it supposed to be

* No lock down when fighting enemy's close to safe zones

* Quest items can be stored in your stash 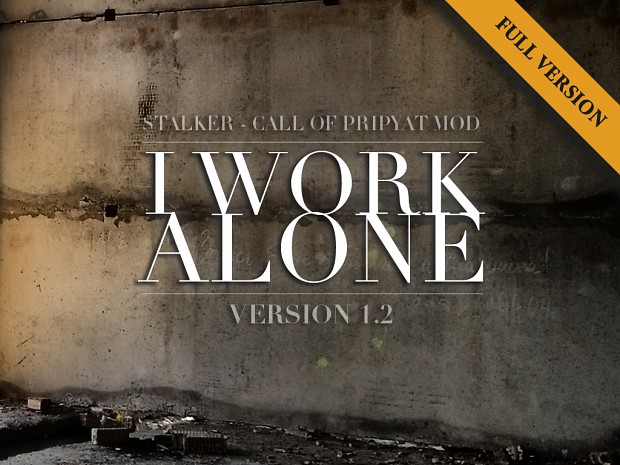 Great job on releasing 1.2! I will be downloading this version since my internet has gone back to it's normal speed.

Downloading now, can't wait to try this version. Ceano mod and I work alone 1.1 were already amazing. This should be even better.

Looks like a great mod, but I have a question: will the first-aid kits actually work to their full potential now? In 1.1 I needed about 5 military medkits to get from 20% to 100% health... Or is this feature to further encourage the use of medics at bases? If so, the Skadovsk will become very dangerous.

It's a glitch that medkits doesn't work as well in realtime mode compared to default time scale which is 5 times faster than realtime.
Glitch is a tough one. We need to go F1 to heal ourselves thoroughly.
It's 5 times more effective healing.

Aww damn, i wasted like 5k on buying medkits.

I had to sell all my artifacts

I've encountered a problem as well. I am running the Steam version of CoP, so this might have something to do with it, but when I start the game it says I don't have the proper disk installed.

after 4 hours it finished downloading and bam it wont work it say insert cd ... to bad i torrented the game

Well there is your own falt you **** tard wait i torrented it..

Hi...I've encountered several crashes at (Deal by the ranger station). X-ray engine crash. Does anyone know of a fix?? or can suggest some fixes.

Awesome mod man, keep taking in suggestions because I've read all 35 pages of comments and these guys astound me with how good some of the ideas are.

Download 1.1 and the 1.1 -> 1.2 patch. From the 1.1 archive, copy and paste the Gamedata folder and the user_atmosfear.ltx file into Call of Pripyat's Directory within the Steamapps/Account Name/Common/. With 1.2, copy the Bin and Gamedata folder as well as the user_atmosfear.ltx file to the same place and overwrite. Boom, success. Copy and pasting the uninstall.bat and .exe or whatever will cause problems for you, so only do those specifically.

X-ray engine crashes right as the game starts up. Any fix?

Hm, my CoP is now constantly having a CTD error when I try to move from Zaton to Yanov Station. It is sometimes recognized by the Xray Bug Catcher, but I don't know where the crash info is held. Using steam, Win 7.

Downoading now. I like previous version. Can't wait to play this. =)

*FIX*
Go to your C.O.P. directory, delete "bin" folder and get Steam to validate files, it will re-download that entire folder (doesn't take long at all).

To prevent this in the future, don't "overwrite\" when you next install the mod, because that's the folder it's replacing. Those files shouldn't need to be replaced, Steam version or not.

This fix worked for me and I hope the developers at least make a note of this issue.

Good job on the mod but I'm having a problem (and this being the first mod I have installed on any STALKER game I'm not sure how to fix it)
The game periodically crashes and afterwards a message comes up saying "Engine 1.6 failed to respond"
I feel like this is a patch issue but I'm not sure because as stated this is my first mod for a STALKER game.

When I try to start a new game (have no old save-files) the game will freeze and I have to kill it via task manager. Then it will tell me that the X-ray engine has crashed. However, the log-file inside the personal documents folder is empty.

Just wanted to tell you that the issue I from my previous comment has been dealt with. I just need to be more patient ;)

Quick question, do you need to start new game with this mod? Also, how to properly install mod to read English. I had downloaded version 1.2, but all I got was the Russian dialog on the main menu. Did I do it wrong? Forgive me, i be noo-by on this. Just wanna play the game right. Any and all help is greatly appreciated. Thanks in advance.

Installation done wrongly if you have russian text in the main menu.
The main menu needs to have the IWA 1.2 logo on it. and YES a new game is required for this mod as it changes pretty much everything.

I love the mod, but I don't understand...is Skadovsk no longer safe from emissions? Its funny (or not) to see me dying in Skadovsk from an emission while watching everyone else act like nothing's happening.

Great mod I already love it just by looking at the screenshots :D

will this mod be compatible with Atmosfear 3 and Absolute Nature 3?