Get hyped for HYP, bringing blood to the mainstream !!

A hidden skirmish takes place. You work for the power elite who are obsessed with the occult. As a part of a secret special forces battalion you wreck havoc beyond all known dimensions. Your agency recovers crashed UFOs and reverse engineers alien technology in hopes of ruling the world. It makes Stargate SG1 and X-Com look like child's play. This game takes top down shooting to the next level by bringing it to the likes and standards of source. Particle effects that will leave you dazed and begging for more after an onslaught of ultra violence. Occult Scrim reveals the grim brutality of war as you mercilessly execute the fallen. Covert warfare that spans: rival cabals, aliens, zombies, and secret mutant experiments. Covering subjects such as heavy drug use in the military, anarchy in the military industrial complex and the new world order. You are a psychic commando with the ability to astral project and remote view. A swift operator ninja who also displays great abundance of ease with firepower. There are no good guys in this realm, just shades of darkness.

Gameplay is designed to encourage relentlessness aggressive behavior and not punish you for chasing the enemy. ( CS or QUAKE type games have this problem ) 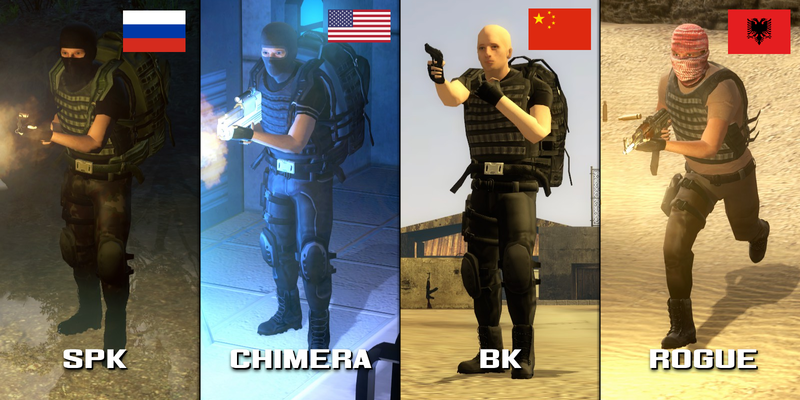 Monstrous spetznas unit given life to by the shadow kremlin. Offshoot of the KGB with at least a dozen hangers full of stashed away saucers. Russia's hidden force for technological supremacy should not be underestimated.

This beast of a unit carefully vetted a battalion of former DEVGRU operators. Accepted into the secret society they protect the very truth from being heard. Some sheep are fleeced and some are slaughtered as even witnesses are not allowed. The developing new world order is nearing a singularity which might result in a Illuminati society and scientific global dictatorship. As the dark soldiers become illuminated they rebel against their masters and one third of the battalion defects.

Known as the black knights or mainly The Merciful Angels. One hundred and eleven super soldiers that were cloned in a genetic laboratory. China is gearing for the fight in light of a cold war sequel. They are entirely bald and inherently possess enhanced psionic abilities. Remember to smoke copious amounts of marijuana to regenerate your psi-energy aka mana.

These are the elite mujahideens. Arabs and Albanians with unstoppable determination to grow their Caliphate and take over the world. They believe God doesn't want the Aliens to interfere with our humanly business. They seek to destroy all traces of alien technology.

This is what you can expect in HYP 0.5

- Many guns have been added.

Curb stomping is now a possible method of execution, by repeatedly jumping on top of incapacitated bodies! *death by trampling is possible

In Free For All, everytime you spawn, a random model will be picked for your character. Skin and body groups are randomly chosen.

While in Team-Based-Modes the randomization is more narrowly set for each Faction.

( I.E. Railgun will fling barrels across the room, or in many cases instantly gib the prop and send the gibs flying at high speed )

Upper-Receiver/Bolt-Carrier/Slide racking, audible cues that give your position away.

With rifles it's possible to do a quick reload by skipping racking, if you change mags before expiring the last bullet.

- Casings are scaled by distance to the camera, to make them more noticeable further away. At all the close ranges the casings will be sized true for realism, while the camera zoomed out will have the casings scale up.

We working hard to deliver a good 0.2 release. New video. Get your friends and help us achieve 1k likes on our facebook before we release!

Hyp is nearing release, we've been busy smashing and gibbing bugs. Here is some gameplay footage for you all.

We've been making some big changes to Hypovolemia!

Just a nicer skin for Spetsnaz team. Made for Hypovelemia v0.1 Alpha.

Hypovolemia 0.1 Alpha has been released! Come and get it! EDIT: 12/8/2013 this verison no longer works, don't download it

Damn i miss this game.

i really wish for an update for christmas.

If they got this on steam and added ranked games it would be amazing fun.

So, what has happen to this mod? I used to love playing .1 until the source update broke it. And the last comment was June of last year. Whatever you guys do, please don't let this mod die.

WE're working on it, improving content and fixing things. It's not even close to death, so don't worry, it won't die ;)

Oh damn, have you guys always been working on this steadily all this time, or did it just recently jump back into gear?
I remember playing this mod on Desura way back when 0.1 was released and there was a (relatively) active server or two. It was rough around the edges but definitely very fun. Glad to see some signs of continued progress.

NAME CHANGE!!! Attention the game is now called Occult Scrim and will have a rebranding of the appeal. Due to the high amount of people unable to speak the name of the game or spell it, we've decided to go with something more obvious and that describes the game more accurately anyway.

The word Occult means hidden, plus it sounds cooler than calling the game Covert Warfare or some ****. Al thought I did enjoy playing C&C covert operations when I was a kid. Occult word can also encompass aliens, drugs, spiritual subjects - besides covert warfare. Get ready for some brutal carnage.

The shadow government and military industrial complex has a bad case of anarchy.

Nope,
The devs are busy. Last update was a week ago, just be patient...

0.1 Alpha is decent and hell of fun,if you got peeps to play with.

Lots of fun, and also addictive. :)