Content! We've been quiet, but not idle. Version 0.2.4.0 is now available. The modDB download page has the files. Some people have expressed problems getting the files from gamefront, we'll be looking into mirror choices for those with problems. In the meantime, here's a quick run down of what we've got in this release.

Dark Sentinel's textures for the Vaygr destroyer are done, and now finally available to you! You've probably already seen older pictures of it, possibly seen video of it, and if you've played the earlier releases, played with the untextured version a fair amount. But here are more pictures anyway. 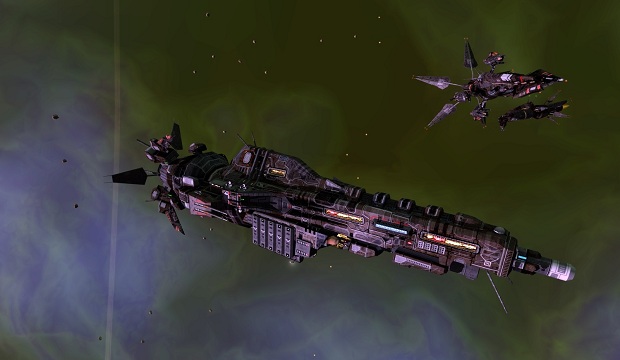 The Vaygr Glaive class ion destroyer is not a fast raider like the UNH destroyer, and more of an anchor of the Vaygr fleet. They have a great deal of anti-fighter firepower to go with the fixed dual ion cannons, and a pair of large kinetic turrets can serve passably in either anti-frigate or anti-corvette roles.

But what's that ship behind it?

Mesh and texture by Dark Sentinel, the Vaygr finally get their pinnacle warship. You've seen it untextured, now see it in full glory.

With eight fixed ion cannons and a suite of secondary weapons, the Morning Star class is a very different ship than the typical cruiser. More heavily armed, but fixed main guns instead of turreted. Faster and nimbler, but more fragile. It should be used to supplement a fleet's firepower rather than acting as the primary pain sink like a traditional cruiser does.

Do the Vaygr get any other new toys this update? Yes!

Mesh by me, texture by Dark Sentinel, the Flare Gunship is to corvettes what the Battlecruiser is to super-capitals. Check it out. 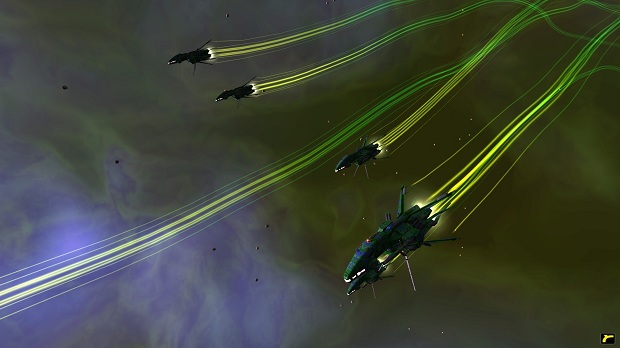 The Arbalest class Corvette uses a weapon unique to the Vaygr known as the flare gun in a heavy anti-capital ship role. Expensive, but worth the price, flare gunships will rapidly chew up destroyers and cruisers with a hail of radioactive death. They look rad as hell doing it, too.

But this isn't just a Vaygr update!

UNH Heavy Cruiser
You've likely seen the old cruiser placeholder, included in past releases and some screen shots. Well, we junked that concept and started over. Modeled by myself and Avatar, and textured by Avatar, the new one is an homage to one of the finest SF starships - Bablyon 5's Warlock Destroyer, but given a Kushan spin. I think you'll like it. 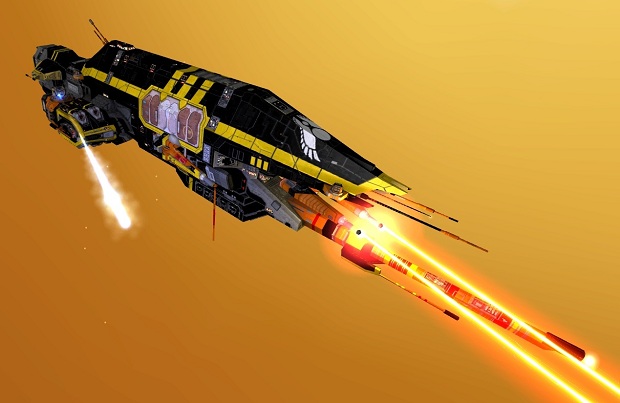 The Zeal class heavy cruiser is largely a traditional ship. It's job is to soak up damage and be generally survivable against any target. Turreted ion and energy cannons provide good coverage against anything larger than a frigate, a battery of heavy missiles extend it's striking range and help against corvettes and fighters, and a compliment of point defense guns will deter small bomber groups from attacking. It may not be the fastest ship, but it is hard to catch it by surprise.

Notes and stuff
If you want to know more about the ships from a story perspective, each has a full passage in the included manual. Also in the manual is a list of known issues, full credits, and change log.

Also in the readme is a section about the use of our assets in other mods. If you would like to use our material in your mod, please read this section and follow it. We're happy to participate in sharing and cooperation to the benefit of everyone, but it is no fun at all to find our hard work being used elsewhere without our consent or credit. Please help us avoid any such unpleasantness.

Now, go get the mod, if you haven't already! And if you have fun with it, please let us know. If not, we should probably know about that too.

Leaps and bounds! Who knows what they'll achieve before their next release!

I spent a few hours tonight trying out both sides, and found that the mod plays a lot like the original homeworld, but with a more advanced... ness to it. Sure its got a few points where its rough around the edges, but overall, pretty cool, and I look forward to seeing what you guys do with the future releases.

Your comment delete was successful. When a comment is deleted all replies to the comment will be removed as well. Because you are an admin, you can click the "view deleted" link above to view deleted comments in-case you wish to un-delete them in the future. If this was a mistake, click the delete link again to reverse the change.

Are these All Vaygr Units?

The Destroyer, Flare Gunship, and Battlecruiser are all Vaygr. The Heavy Cruiser belongs to the UNH faction - UNH standing for "Unified Navy of Higaara", the various kiith fleets combined. :) So 75% of them are.

Its interesting how you changed the design trends of the original races, and i'm not entirely liking it, they are just too different to the vainilla designs. BUT, this is also something that makes me love this mod cuz i also think that those new designs are outstanding, its a it weird =P
Keep the GW!! =D

Well, that depends on your definition of "vanilla" to some degree. It's certainly my intent to make sure that the UNH units resemble their HW1 predecessors to a far greater degree than any of the stock HW2 higgy ships did. For the Vaygr I wanted to make sure there was zero chance they could be confused with any of the other races, hence the all-new look. Thank you for your kind words, sir. :)

I really like this it is clear that you have spent a good deal of time on this.

While all looks beautiful and simply georgius... and while I love B5... I can't stand this Warlock Wannabe thing, it just looks so damn out of place...

Selor - thanks for the feedback! The team had always had some reservations about our old placeholder and UNH cruiser concept, so this spring I think it was I started work on a redesign. Instead of simply drawing what came first to mind, I sought out inspiration - other ships in fiction that reminded me of old Kushan vessels.

I'd been watching B5 and for the first time looked at the HW1 kushan destroyer and the B5 warlock. I was shocked, honestly, because they share such an enormous degree of similarity that, if the timing hadn't rendered it extremely unlikely, I'd swear one influenced the other. Seriously, look at the nose turret placement and architecture of the Warlock next to the HW1 Kushan DD - it's uncanny.

So that's how the Warlock entered my stable of inspirational designs as I went to the drawing board - really my tablet - to try and whack together a newer, blockier, sleeker, Kushanier ship. After a few weeks I kept drifting closer and closer to the Warlock. It had the same lines, proportions, and a lot of the same structural "languge" that the Kushan cruiser and especially destroyer were made with. The team wanted the UNH cruiser to reflect this - the smoother designs of the UNH frigates and destroyer were meant to be more modern while we wanted the cruiser to look old, rugged, and massive.

Eventually I kinda broke down - all my concepts were trying to be as Warlocky as possible without being a Warlock and it was driving me crazy. I had so much trouble getting past this that I decided finally to put my enthusiasm for the Warlock to work. Instead of trying to work around the largest piece of inspiration I had, I used it as the basis. HW's included lots of shout-outs before, and this one was one of mine. Plus, the Warlock's one of the most under-represented brilliant SF designs ever. I had hoped that my alterations - combined with the innate Kushan-ness of the Warlock wouldn't be jarring, but it would appear that to some it is. Oh well. :)

that ship kind of looks like a assualt rifle from halo

These ships are just awsome great job and I hope to see what you guys come up with in the future! Keep up the great work!

I like this mod. My friends too. We are waiting for next,completed version! Good luck! ;)