New 'Ultimate' edition out now!. You won't believe your eyes.

Overview: Many of you are already familiar with the AMAZING ENBSeries mods created by Boris Vorontsov (see Enbdev.com). While his HL2 adaptation has garnered much acclaim, an official adaptation has not been released for the original Half-Life. The HL2 adaptation unfortunately has only partial functionality when used with Half-Life: Source....

So, I did a good deal of research and tinkering, and have put together a shader package that is compatible with the Half-Life: Source engine. Much care has been taken with all settings to achieve an attractive and balanced set of effects, with the primary goal of enhancing visual immersion. This package contains a customized configuration of his Vampire Bloodlines adaptation of ENBSeries, and adds a palette texture for additional color correction. Overall the mod adds a moody sort of 'Bioshock-esque' feel to the original Half-Life aesthetic ... great for the scary moments!

NOTE::cannot guarantee that this mod will work with any and all texture packs out there, but it seems to work fine with the original game, and I managed to install a bunch of nice textures without getting any weird artifacts... See the demo videos in the Videos section!

In some of the the videos, the effects from this mod are being enabled and disabled in real-time for comparison (See details on ENBSeries below). The gameplay in the video also uses amazing textures and models from: Facepunch.com
If you accidentally install conflicting texture packs and get 'weird textures', those are NOT being produced by this mod. If this happens, install the 'Resourced HD' texture pack (overwriting any files if asked) and you'll be good to go; get it here: Hds.newmail.ru

NOTE: THIS MOD REQUIRES A DECENT GPU. FOR PERFORMANCE ISSUES, SEE THE NOTES ON SSAO LATER IN THIS DESCRIPTION

As of V1.1, the files included are:
- enbseries.ini
- enbfocusing.txt
- enbpalette.bmp
- d3d9.dll
- enbconvertor.ini //Allows you to use mod while running in DX8 mode, with included DLL
- d3d8.dll

By default the mod will be enabled when the game is started. You will see a red grafitti design in the top left corner of your screen if the mod has loaded correctly. At any time, you can toggle the effects on and off by hitting 'Shift-F12' at any time in the gamr. If your framerate gets hit hard, you can also toggle the SSAO effect by itself by hitting 'Shift-F10'. Alternately, you can manually adjust the SSAO quality settings to improve performance by opening the 'enbseries.ini' file in a text-editor and editing the following lines in the [SSAO] section:

In fact, all the effect settings are configurable by editing the 'enbseries.ini' document, for details, see Enbdev.com

This mod works with Half-Life: Source from Steam, and NOT the origial. ENBSeries is licensed for redistribution and customization, for details pls see Enbdev.com
All credit due to Boris! ;)

This is my first upload, let me know what you think.! For me, it makes a WORLD of difference, greater immersion when playing the game :)

October 31, 2010 - New 'Ultimate' edition out now! You won't believe your eyes. Check out the new video and comparison screenshots in the image gallery! 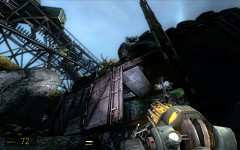 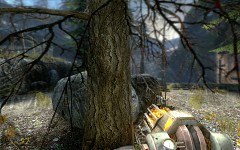 Stay tuned, and in the meanwhile, check out the enhanced shader package for Half-Life:
Source and Half-Life Deathmatch: Source here at ModDB: Moddb.com

LITE VERSION of the HL:S - Enhanced Shaders 2010 Mod! This is a for those who have trouble running the regular version at playable framerates. NOTE: This...

almost all the weapons are completely white

how do u enable enb on startup?

i dont know how to operate mods because there is only files,icon and no game

Bit late to the party but it appears with the new structure of Half Life Source (now installed inside Steamapps/Half Life 2/hl1 the mod is not working. Any new instructions on how to get it working?

Add to the bin folder in .../steamapps/common/Half-Life2/bin

I.imgur.com
you can't see it in the shot but the blur in center was horrible as well as textures being broken. not triple monitor friendly?

Does this ENB-series work in HL WON, version ??
Or is it only on Steam...

1. This is for Half-Life Source.