HL2Stories: Chris Patterson is a Half-Life 2 story mod that takes place in the same timespan as Half-Life 2. It tells the story of Chris Patterson, a young rebel that leads a rebel camp. The 7-Hour war happened and people from all over the country had to leave their home behind to escape from the Combine! You are the only one to find the Special Force Team, a group of people that tried to find a very special signal repeater so your rebel camp can communicate with other camps. 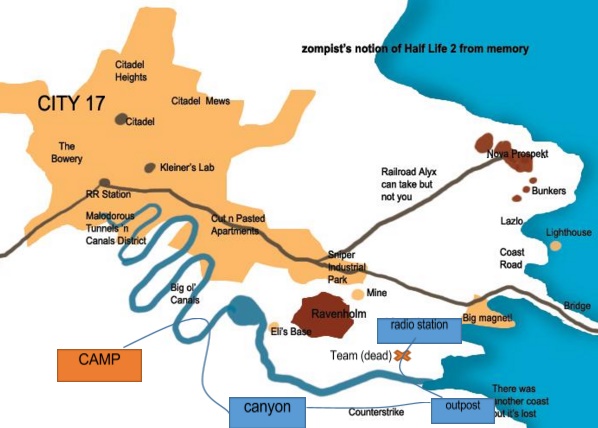 Chapter 1 - The Rebel Camp
Chris Patterson helps out in the rebel camp. He gets informed that the Special Force Team that searched for the signal repeater is missing. The signal repeater is needed to bounce the external hardware to another rebel camp which could be used for secret communications or even a whole rebel network. Suddenly the Combine attack the camp and Chris is forced to flee and find the Special Force Team! The others will hide and try to fight back the Combine

Chapter 2 - The Canals
Chris has to fight against the combine while getting through the canals. There are several small outposts by other rebels that help him to blur his traces.

Chapter 3 - The Canyon
Chis escaped with no more than a scare and is finaly save from the Combine. Now he has to find the Special Force Team. (This chapter should look a bit like HL1's canyon chapter. It would be the perfect time for some puzzles or jump sequences as the player should come down after all the action)

Chapter 4 - The Outpost
(this chapter could look a lot like Counterstrikes dust_2 or Lost Coast) Chris now needs to focus.
He finds the other outpost, everyone is dead and it seems like the combine were faster than Chris but then he finds zombies and has to fight them back.

Chapter 6 - The Radio Station
Chris found the radio station with the signal repeater. In a last fight against aliens he has to get to the signal control panel and activate it. After that the mission is over and so is the game.

The current plan is that the mod will continue at least six small chapters which all will take place at different environments. The mod should have a total playtime of around two hours.

There is no specific release frame in my mind as I want this mod to be as awesome as it can get!

Even though I am working on this project since march 2015 I am in a very early phase. That's the reason why I need people that want to help me to develop this mod. I already have some settings in mind and layed down the storyline but I need mappers and modelers because I am still learning to get used to the tools and I don't think I could be as good as I want this project to be.

First of all I need people that are experienced in mapping Half-Life 2 like environments and Interiors. We will work together. I have a very competent group of people that could give very advanced feedback and I could help with basic mapping and material creation.

How can I reach you?
support@premadegames.net

Will the mod be free?
Yes

Will you give me money if I will help you?
I would love to pay you but this project is just a project I really believe in.
But if I would get any money from this project, I would dedicate it to you.

Do you think this project could be as awesome as you want it to be?
Probably? I know that the Source Community is the most awesome community in the world and there are so many people that would love to help me.

Why is your english so bad?
Cuz' I'm a german and learned most of it from reddit and tv shows ;)

To promote HL2Stories: Chris Patterson and grow its popularity (top mods), use the embed code provided on your homepage, blog, forums and elsewhere you desire. Or try our widget.

Credit to DKgaming for base script and Lambda Fox for the models. This mod changes the damage values to be more realistic and challenging. Every gun in...

This mod will test your skills against enemies 3x their normal strength, low ammo, and low health. YOU WILL NOT SURVIVE...

SMOD: Tactical is a modification of the single-player SMOD(Super Mod) for Half-Life 2. This mod takes advantage of SMOD's robust customization capabilities...

Borealis: The Last Man Standing tells the story of the big and lost events from the legendary ship "Borealis" which it has been disappeared for a long...

The purpose of this addon is to give new life and style to the old, but beautiful mod "MINERVA: Metastasis", which to this day remains, without exaggeration...