Strictly non political and for entertainment only, some historical art contents in this add-on may be forbidden in some countries such WWII emblems and insignias, be aware of that before installing this historical add-on to your game, respect your countries law policies.

You love to play Blitzkrieg mod, you are passionate by WWII history and wish to get something more historically accurate and much more immersive for your game? You wish to play Blitzkrieg mod with WWII historical textures, real emblems, real uniforms, real flags, real units and troops who fought in Normandy during D-Day and the western front? well, you are at the right place then, Historical add-on will deliver exactly what you need, the real deal, and even more! get ready for more epic and realistic western front battles with the Historical add-on in HD for Company of Heroes: Blitzkrieg mod.

IMPORTANT: The Historical Add-on and Blitzkrieg mod are only compatible with Company of Heroes Steam version, the LEGACY lighter version edition of Company of heroes is NOT COMPATIBLE.

The current version of Historical Add-on is the V2.4.6. COMPATIBLE FOR STEAM BLITZKRIEG MOD VERSION 5.2.0. ONLY.

You need the original game Company of Heroes Steam game with the extension OPPOSING FRONT from Steam, AGAIN, DO NOT TAKE THE LEGACY EDITION, link here: Store.steampowered.com

install HISTORICAL ADD-ON V2.4.6. from this page by using the MEDIAFIRE or MODDB downloads links.

The correct installation path by default is: C:\Program Files (x86)\Steam\steamapps\common\Company of Heroes Relaunch, DON'T FORGET TO CLICK ON "CREATE SHORTCUT ICON" at the end of the installation when the installer will ask, then drag and drop this shortcut icon into your PC icons menu shortcuts, do not use the normal BK launcher icon, only use the Historical Add-on game launcher, this launcher has been created by the Blitzkrieg mod team for us, it is identical to the Original Bk mod launcher, Big thanks to them!

When the add-on is correctly installed, it should look like that in your Company of Heroes Relaunch directory

If Steam ask you the authorization to launch the mod as "-mod blitzkrieg -dev -nomovies"? say yes, Historical Add-on .EXE is Free from malware, or viruses, it is CLEAN, so if your antivirus software is blocking it, unblock it, you can configure your Antivirus to ignore programs that you know are safe by adding them to an exclusions list.

NOTE: THE ADDON IS BUG FREE AND CAN'T CRASH YOUR GAME, IF IT CRASHES, IT MEANS YOU DID SOMETHING WRONG, TIPS & COH ISSUES: READ THE "ARTICLES" SECTION (Archived)

***YOUTUBE TUTORIAL VIDEO, HOW TO INSTALL COH, BLITZKRIEG MOD, AND HISTORICAL ADD-ON, the video is in French, but ENGLISH SUBTITLES ARE AVAILABLE, this video has been made by "Panzerblitz1", one of the Blitzkrieg mod team member: Youtube.com

Playing Company of Heroes with REALISTIC VOICES for all units in game, check all that here, ENGLISH SUBTITLES AVAILABLE AS WELL: Youtube.com

***It is recommended from time to time to do a big clean up and reinstall Blitzkrieg mod and Historical add-on completely from scratch, especially if you have other mods on your machine, this to prevent bugs, glitches, missing textures, a.i. problems, some files can be corrupted with the time because of multiple installations.

D-DAY, June 1944 add-on is a complete cosmetic rework historically accurate for your Blitzkrieg Mod, adding HD textures to the game (taskbars, menu, icons, symbols, historical camouflage, etc...) the D-DAY add-on will give you access to the real combat units who fought in Normandy, all the fake uniforms, flags, symbols, icons, units portraits etc... are replaced by the real ones for a better game play experience, this Historical add-on is a visual/cosmetic change, your COH Blitzkrieg Mod game play, units and doctrines remain untouched.

****The D-DAY JUNE 1944 add-on is FULLY ONLINE MULTIPLAYER COMPATIBLE, EVEN IF YOUR OPPONENT(s) DON'T HAVE THE HISTORICAL ADD-ON INSTALLED TO THEIR BLITZKRIEG MOD (Only you will see the changes).

Why only one tech. tree per army? because Afrika 43 will be playable online in 1 player versus 1 player, something Blitzkrieg mod can't do due to the way the specialized doctrines are set.

Blitzkrieg mod has a more cooperative play style who use team doctrines to support each others teams in online multi-players games, i made Afrika 43 to fill that 1 versus 1 PvP hole, Afrika 43 is of course also a fantastic multiplayers mod with the possibility to change your tactic during your game, this is one of the advantage to have a single multi purpose army instead of 3 highly cooperative doctrines, this to prevent being stuck with only one specialty and ending up with artillery when you'll need tanks, thats why Afrika 43 is great when played in 1v1, more equal chances for both opponents depending only of their skills and strategy instead of their doctrine choice.

In multi-players its also very fun to support your mate in you want to play more in cooperation prefering going infantry when your friend is picking tanks, the mod is perfectly balanced and firstly created for online players versus players games (PvP), having 1 tech. tree also doesn't mean that both armies will have the same tools, not at all, but you will have more tactics choices for sure, the Afrika Korps and the 8th Army trees have 16 possible upgrades like Blitzkrieg mod and will give you access to Infantry/Tanks/Artillery regrouping the best of the best units existing per Army.

Artillery units will be reached only at the end of armies command trees to prevent annoying arty spams.

Like during the North African campaign, the Afrika Korps will access to quick and very mobile units and the Commonwealth 8th army strong fortified defense with great counter attack capabilities, Good luck soldier, it ain't gonna be easy!

Play Afrika 43 mod on Afrika 43 desert maps! they have been created and 100% optimized for the mod!

AFRIKA 43 is online compatible ONLY IF PLAYERS HAVE THE HISTORICAL ADD-ON INSTALLED TO THEIR BLITZKRIEG MOD.

at this address: blitzkrieg_addon@yahoo.com , it took me 5 years of everyday work (still updating the add-on with new contents) to create this historical add-on for Blitzkrieg mod, it has been a very long trip and a massive amount of work to achieve that by myself, but thousand hours later its finally here for the pleasure of all, now its time to take care more of my family during my free time, so if you like to donate, you're more than welcome, many thanks to all of you.

Its forbidden to use D-Day June 1944 or Afrika 43 textures, models, arts, Afrika 43 desert maps or any modifications, parts, from the add-on without my authorization and the authorization of their owners. This article is related to the original Company of Heroes and Blitzkrieg Mod game settings, it has nothing to do with Historical add-on, please BUY THE ORIGINAL GAME (Company of Heroes, NOT the LEGACY version who is not compatible) to prevent BUGS & CRASHES, this is a very cheap game and he's earned it! before playing COH, DON'T FORGET TO INCREASE YOUR PC VIRTUAL MEMORY ( Youtube.com ) & ALWAYS HAVE A GRAPHIC CARD DRIVER UPDATED, mods are in general more hungry with PC resources.

- Make sure you have the right Blitzkrieg mod version, if not Download it from the Steam store page here (free): Store.steampowered.com

- IMPORTANT: Do not set your Shaders quality on "ultra" but high, otherwise it will create visual errors, ultra shaders aren't supported by the COH1 engine. 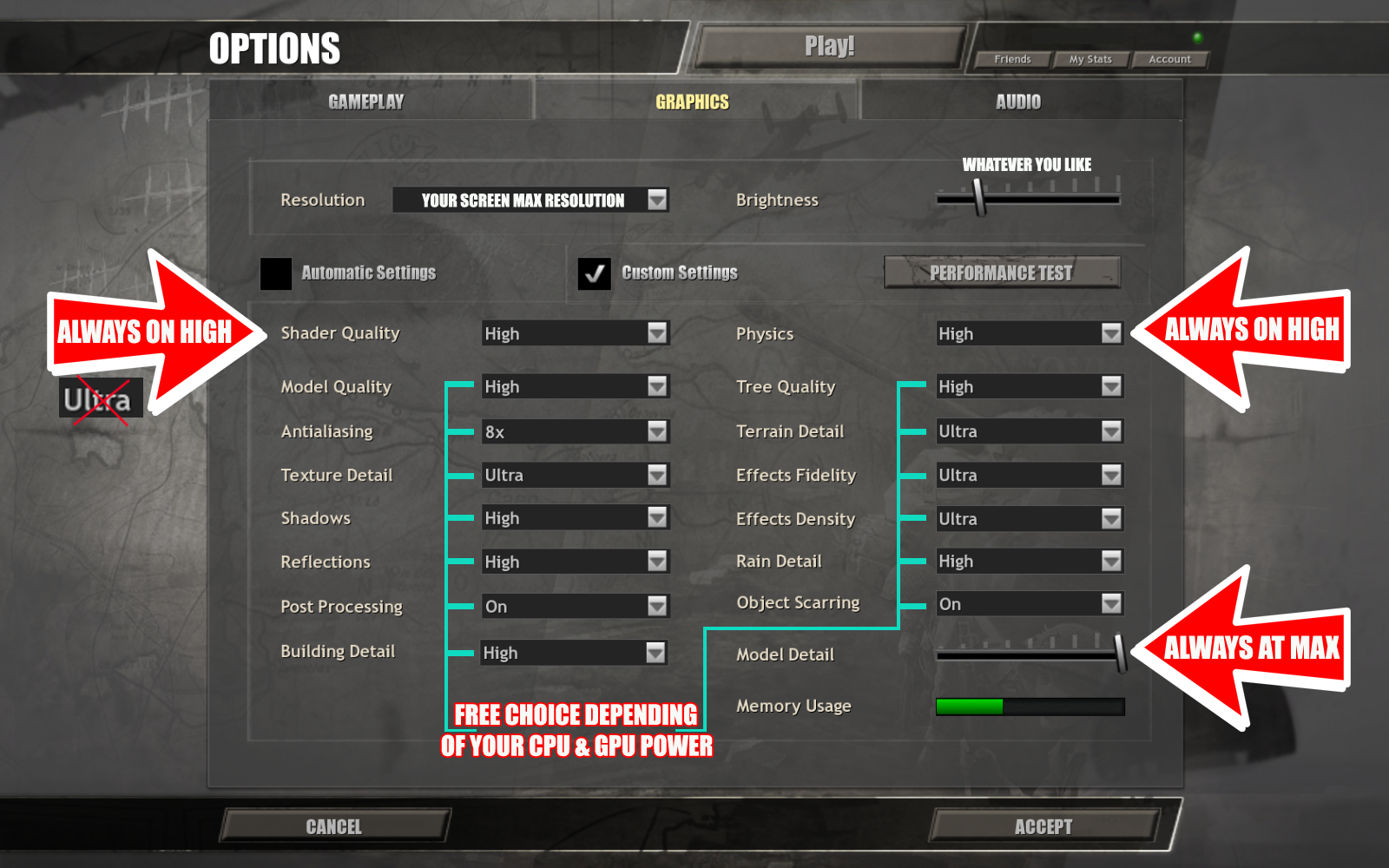 - Low framerate, Lags with WINDOWS 10 updates: If you have problems since last windows update:

- Try to set the compatibility mode for the game on Windows 7. ( Check here )

-Right click on RelicCOH.exe and select Properties. Select the Compatibility tab and check the box that says "Disable fullscreen optimizations"

-Nvidia control panel and Turning vertical Sync off seems to fix the problem as well:
Rather than make this a global setting I have done it under Manage 3d settings > Program settings.
Added CoH then set Vertical Sync to off for just this game.

-IMPORTANT: From now, Windows 10 will automatically run his updates, you can check that in your update control panel here ---> Windows update panel and when its the case, ALL games and applications will be concerned by having less resources to play with, this will cause major lags and will slow down all your running programs, especially if you are playing online, you can't prevent those updates to run as there is no more options to stop Windows 10 auto updating.

-Try to have your Steam application and your Company of Heroes game in the same location on the same HDD/SSD.

- USE ONLY Microsoft DirectX 9.0, ( Microsoft.com ) DirectX 10 or later aren't supported by COH1 and create in game texture errors.

- For people having trouble in online multiplayer "crash": go to documents/my games/company of heroes relaunch/playback. there should be a file called temp.rec. You need to create a text document with notepad or wordpad and call it temp.rec. Then , delete the actual playback document. This should work.

- Don't forget from time to time to empty you COH LogFiles: (PC/Documents/My Games/Company Of Heroes Relaunch/LogFiles) A lot of Gigas are taking from those files!

- Errors/Crashes/Game not launching properly because of missing files ---> time to verify your game integrity cache for BK Mod and COH: library right-click on BK mod or COH -> properties -> "Local files" tab -> "verify integrity of game files" button Youtube.com to prevent having missing textures, Warning, this will delete your customs units "native" speeches sounds by replacing them by the original vCOH ones.

A little "AFRIKA 43 units & Tactical guide" showing all units in the current version V2.4.1. with their respective skins. (Pdf file)

The Wehrmacht AI is retarded. It doesnt do anything, just sits at base or doesnt produce units. the british AI steamrolls within 5 minutes. great balance lmao.

Working on it, did you tried Desert maps made for Afrika? or its on Western maps?

Does this mod sort out the stupid disabling auto-target for tanks? That vanilla 5.0 has?

Great mod, we have to get the desert boys some shorts eventually.

The Crete mod has models with shorts, I wonder if they would allow for you guys to utilize those assets to give a few brits and Germans desert tan shorts. Stukasoverstalingrad.blogspot.com

I don’t use shorts because in order to create shorts you need to erase very important texture, and having missing legs textures isn’t ok with me, also in Africa most of the combats soldiers never used shorts except for press pictures.

I cant install because of error like ''Folder names cannot include any of the following character: /:*?<>'' any advise?

You need to manually remove that link when its happening and put the correct blitzkrieg path folder.