This is UnrealHD 2.1, a High-Res skins mutator for both Unreal 227 and Unreal Tournament. This will replace all those old, blurry skins of Unreal/RTNP with detailed HD counterparts. This is meant to be used with SinglePlayer, but can also be used offline with bots. This also works with Custom maps, Mutators, and Mods! Easy to install and does not replace/modify any Unreal system files. This pack does not break online compatibility, although it may not run on a server for the time being. Version 2.0 now contains all the player skins as well as many fixes and enhancements!

This Mod will replace all those blurry Unreal/RTNP skins with detailed, high-res counterparts. It works in Unreal Gold 227 and Unreal Tournament '99. My primary goal with this project was to keep the skins looking as faithful as possible, while removing the obvious outdated "pixelation" of the original skins. Each skin has been manually reworked. There has been no simple filters or cheesy sharpening techniques used during the skinning process. Each part of every skin has been manually air-brushed and blended. Hundreds of layers were created to apply overlay detail textures, better looking shadows, better highlights, and more. The skins look like the originals from a distance, but more detailed up-close. In the case of bigger meshes like the Titan, detail is evident even when viewed from a distance.

NOTE: If you downloaded the Version 2.0 pack before 11/20/19, please download again, as there are some critical bugs fixed with version 2.1.

Although these skins will work in UT99 offline with bots, they are primarily meant to work with the OldSkool mod in SinglePlayer. The Oldskool mod allows you to play Unreal1 content in UT99:
OldSkool Mod

NOTE: If you do NOT see a mutator window, it probably means you are using the old version of Unreal! You need to use Unreal Gold with the 227 patch, NOT the original Unreal. Everyone should have Unreal Gold or UT99 by now anyway...

Virtual Memory error crash: Some user-made maps have a LOT of skins and textures. When this pack is used alongside Ahaigh01's texture pack, it's possible some maps will crash with a "Virtual Memory" error with too much saving/loading. This happens more often in UT99. If this happens frequently, follow these steps:

Player Model Skins turning back to default after loading a saved game: This problem appears to be UT99 specific with the oldskool mod. I am unsure why it happens, but the solution is to just download Ahaigh01's texture pack, which comes with skin texture files that will always work even after saving/loading a game. The only issue that will remain is with the hidden player skins contained in the system files. Unfortunately, these skins will still continue to revert back to default after loading a saved game...

This project was conceived by me (Lightning Hunter), and most of the skinning was done by me. However, there are a lot of other people to credit! Here is a
comprehensive list of all who contributed:

-Ahaigh01 created a thread at OldUnreal back in 2011 with a handful of high-res skins. All of these skins have been included in this release, with most
of them having been tweaked by me. The following skins were created by Ahaigh and are completely unmodified:
Flags, Sign, Steel Barrel, Wooden Barrel, Chest, Wooden Box, Moon Two, Moon3, Boulder, Lantern, Knife, Rabbit, ISV Robot, RTNP Marines, UT99 Boulders, Nali Skeleton, and all the books.
The following skins were created by Ahaigh and tweaked heavily by me:
All trees & Plants, All player skins, the Monk Statue, Eightball Gun, Dispersion Pistol, Health, Nali Fruit, Amplifier, Bandage, and the Flash Light.

-Yrex helped out immensely with code tweaks, mesh fixes, and more. The RTNP weapon skins would not be working properly if not for his meshes and coding help! He also helped me tweak the original mutator almost beyond recognition, fixing many bugs with OldSkool not working properly with the HD Skins, as well as allowing Fragments and chunks to work. Thank you for all your hard work with the code, Yrex!

-Buff Skeleton (Waffnuffly) created the original Spawn Notify code, which allows the mutator to exist in such an easy to use form! This pack would be so much more difficult to install/run without it...

-Casey, for the creation of the UT Texture Merger tool (which will most definitely be used in the future), and also for his help in general.

-Skywolf created multiple mesh fixes, such as the new Titan mesh that fixes the mirroring issues with the skin. These issues were blatantly obvious with high-res skins, but barely noticeable with the original blurry skins. Also, keep an eye out for a possible future release from Skywolf with HD meshes/models!

-sn260591 created the original mutator code for this mod, which unfortunately lagged the game (might have just been my system) and had to be scrapped. However, I still have to thank him for the original code that allowed me to get this project up and running and tested!

-Leo T_C_K, GoPostal, Rocky, and Preki for beta testing. Thank you all for your feedback and support!

Also, a lot of the detail overlay textures I used on these skins came from various free texture websites on the internet. Here are some of my sources:
hhh316: Hhh316.deviantart.com
Mb3d (Max Textures): Mb3d.co.uk
AGF81: Agf81.deviantart.com
CGArtShop (website down now) - for the blood texture or "seamless strawberry jam".

Production Details and Other Info

This project took about 8 months of very intensive work. Honestly, I'm not sure I should have spent this much time on it! The average skin took 4-6 hours to complete, with some of the more complex skins (like the Titan) taking several weeks. 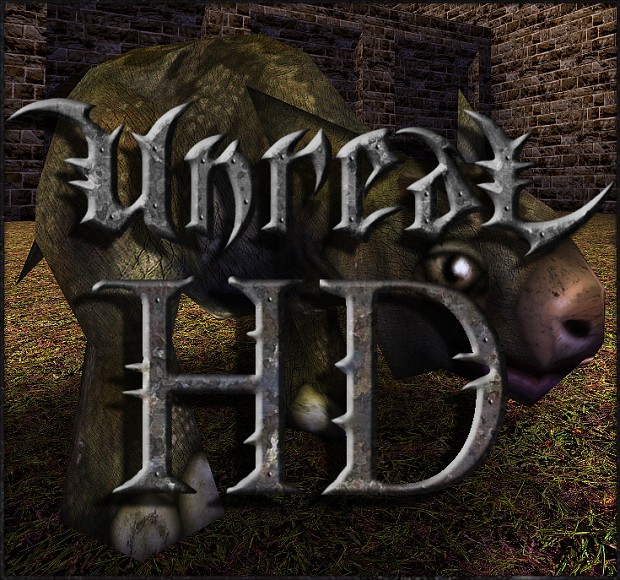 Sites.google.com
If anyone wants even higher quality versions or lower of the ones in this link, go here.

And I just installed and began playing this game yesterday! You readin my mind or somethin? ;)

Looks great but there are some problems.

I installed V2 on Unreal Gold (version 227i) and enabling the mutator caused FPS to drop and the game started to lag annoyingly. I use Direct3D9 ("UseS3TC" is set to True). The game runs fine if I disable the mutator and V1 of this mod still works without any issues.

My PC is pretty solid and I never had any lag problems with Unreal mods before.

Do you know what could've cause these issues?

The new version should speed things up, not slow it down! Can you send me a private message with the contents of your Unreal.ini? Upload it somewhere if you have to.

Though there is still a small problem. The mutator doesn't allow to use custom player skins and always replaces them with default ones (for example if I pick "Male 2" player model it will always have default "Ash" skin in the game).

How was the lag fixed? Did you download the fix I PM'ed to you? If my fix worked, I need to create a patch for everyone else.

I cannot replicate the problem with players reverting to the default. Are you using 3rd party skins, or official skins? Does a skin like Male2 Ivan work? Finally, Can you upload Unreal.ini like I first requested? I would prefer you send me a PM, as it will alert me when you respond there. I don't get alerts here! Thanks.

I have in fact identified an issue with 3rd party skins not working in Unreal Gold 227. They work fine with UT99 (which is the engine I tested more extensively). JackHonda, I will upload another patch that I would appreciate you testing for me. Expect another PM soon.

The mod is great, thank you very much!
However, I can confirm stutters and fps drop when I shoot weapons. Can you please fix it?

Noticed a issue.
Serious lag when using hitscan weapons of any kind even custom weapons.
Guns that use projectiles work like a charm.

Fix on the way, guys. This is an issue with Unreal Gold only, because the mod is dynamically searching for a file that only ships with UT99 (Botpack). The result is a log file that inflates to massive sizes with all the errors. A fix is coming shortly.

These are really awesome - I've done a video on them here, thanks for the hard work!

Your welcome, and thank you for the awesome video! I updated the version to 2.1 today (fixes a serious lag issue with Unreal Gold). Make sure you update your own version!

When I get around to putting up an article about the new release, I will link to your video!

A chunk of player models are missing for the record. Still great work.

None are missing. Can you be more specific? One thing to keep in mind is that the player skins are not shown in the player setup window unless you have Ahaigh01's texture pack, and even then not all are shown. However, ALL are high-res in-game.

Oh alright. the issues i had were with m1 male to m1 male7, i assume they will be high res when in game then. thanks.

So I downloaded both this mod and the 227 patch. and I also have s3tc enabled. the mutator window comes up but i dont see an option for the HD skins

Sorry for the late response; Moddb does not notify me when someone comments on one of my mods... Anyway, something must have gone wrong somewhere during your installation process. Do you have UnrealGold with the 227 patch installed? The mod will not work with the old version of Unreal (the non "Gold" version). Besides that, make sure you properly copied 'HDSkinsMut.int' and 'HDSkinsMut.u' to the Unreal\System folder. Read the installation instructions very carefully to ensure you didn't miss anything!