Heart of Evil: Napalm Edition (HOE: NE) is a remake of the old mod Heart of Evil, a Vietnam themed war/survival horror FPS. The HOE NE Team hopes to help you relive that experience, or for those of you who haven't played it, a chance to try something new. They put a lot of work into the original concept and we want to it endure, for that reason we have updated the mod as best we can with graphics and gameplay.

Did you know that we have a narrative? Twenty Six pages in fact! We are releasing Chapter One and several screen shots to celebrate the near completion of the internal beta towards a public release!

Deep in the development dungeons of the Heart of Evil: Napalm Edition (HOE:NE), grows a great evil, an evil about to be pre-released upon the community. Enter the mind of Wesley Robert Hollfelder/Trilkin, one of our talented voice actors and lose yourself in his twenty-six page novelette:

Darkworld is a short story about the events that occur in the HOE:NE universe before Percy Freeman (the player) is assigned the mission to assassinate Kurtz. Chapter One has been released with new screen shots and information on the final release. There will be additional Darkworld Chapters released up to the first public release of HOE:NE. Before we get to the screen shots or new features, rest assured that the game is nearly completion. We have sorted out all coding issues and have been testing the maps over and over, finding every possible bug for a polished release. 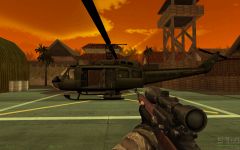 Now let's talk media. We have released four screen shots from Episode D and three from the Alamo expansion. We are doing our best to showcase what the player will get without giving away "the goods". Each Darkworld update will have screen shots to accompany it as well as additional information on features and updates on progress. 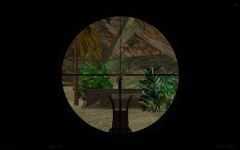 Lastly for this news update, information and features. We have fully integrated a inventory system for notes in the game. Every note you find or read will now be displayed in a tidy GUI window with scroll bar which can be read at the players pace, and can be referenced to at any time with a stroke of a key. Finally, the M21 Sniper rifle sprite has been updated to a model to accommodate any screen resolution with the highest quality possible, while looking snappy and remaining usable.

Oh, I almost forgot, you can find Darkworld Chapter One on our website or follow the link below:

Darkworld Chapter One
Enjoy the update and see you on the Huey!

Awesome! Going to download chapter one now! I really can't wait to play this, I had a lot of fun with the first one.

So the download is only media. Any confirm release date?

There is no download, Darkworld is a novelette, you know, to read.

where is the link for darkworld chapter one?