Hammer Deluxe is an open source half-life 2 modification of the episode 2 engine of which has been modified especially for half-life 2 map makers in order to make much more advanced maps, puzzles and randomized events to make levels much easier to achieve.

There are NO custom models, sounds, maps, materials or anything that the mod does NOT require as this is made for people to make better maps as this is a mod to fix what Valve decided not to include into the hammer feature list of which we could easily make use of but they could not.

We have not touched the Valve Hammer Editor as the source code for that is not released, but we have highly improved the entity coding and .fgd information such as making it so mappers can modify the health, model, skin, ammo... etc of npc's in order to make a boss, import in custom models / textures and more into their map so they don't have to create entirely new mods just to test out or show off their creations.

The Source code for this Modification is available to everyone for learning purpose's only. If for any reason the content of Hammer Deluxe is needed for any Half-Life 2 Modification, please supply credits to Hammer Deluxe as you would have read the ToS.

3. logic_random_event
Roll a random number and tell the entity what to do once each number is triggered.

Currently Edited Content:
1. math_counter
Input - GetValueAsString
Output - OnGetValueAsString - Sends the Initial Value to another entity such as the game_string_text in order for it to be displayed on the screen.

2. item_item_crate
Added muiltiple items to be created by the entity when broken.

4. All npc's - ( Only works on npc_zombie as of this moment )
Remove Headcrab - Remove the headcrab off zombie npc's.

5. All item_ammo pickups
Ammo - Change how much ammo this item will give apon pick-up.
Model - Change the item's model.

Under no circumstances is any content from Hammer Deluxe to be copied from and important into any other Half-Life 2 modification and be taken credit for even after modification. This is classed as piracy and the mod will be also classed as stolen property of the Wireframe C.O.U 2009. Under any chances of piracy happening, the mod will be notified once targetted to supply credit to Hammer Deluxe.

By downloading Hammer Deluxe or it's source code you agree to the T.O.U that you have read and agreed and will follow the T.O.U on Hammer Deluxe being the property of Wireframe and will not be used for anything other than learning purposes.

Wireframe also holds the right to change the T.O.U at any time given and all those that have aquired Hammer Deluxe will agree to the changes and will follow as instructed.

Want to advertise your mod?
Post a comment at the bottom or PM Weeblinator with your mods name and moddb page!

For the past two weeks I have had leave from my job, and using this time i have been able to work on TDP and get something pushing further towards release. Doing this, i have come up with a plan to create a multiplayer game instead of a single player allowing me to test this with my current beta testers making it more enjoyable to work on. 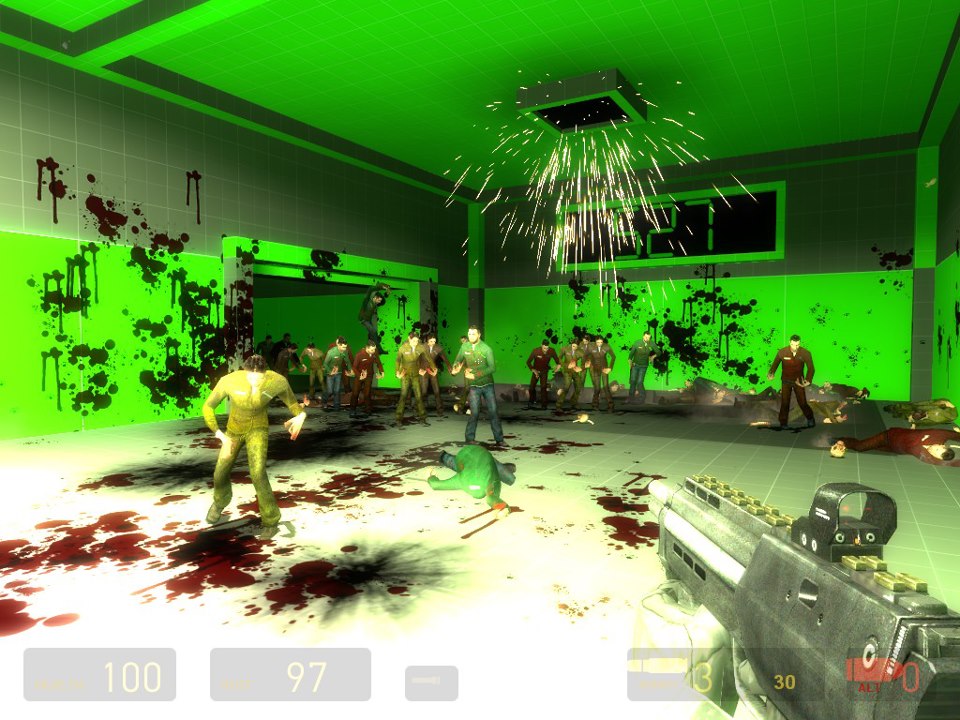 So ever since the end of 2012, I have managed to port TDP to deathmatch using the episode 1 engine ( this also allows people that do not have episode 2 to play the game ), change the zombie models and give them new skins and code. 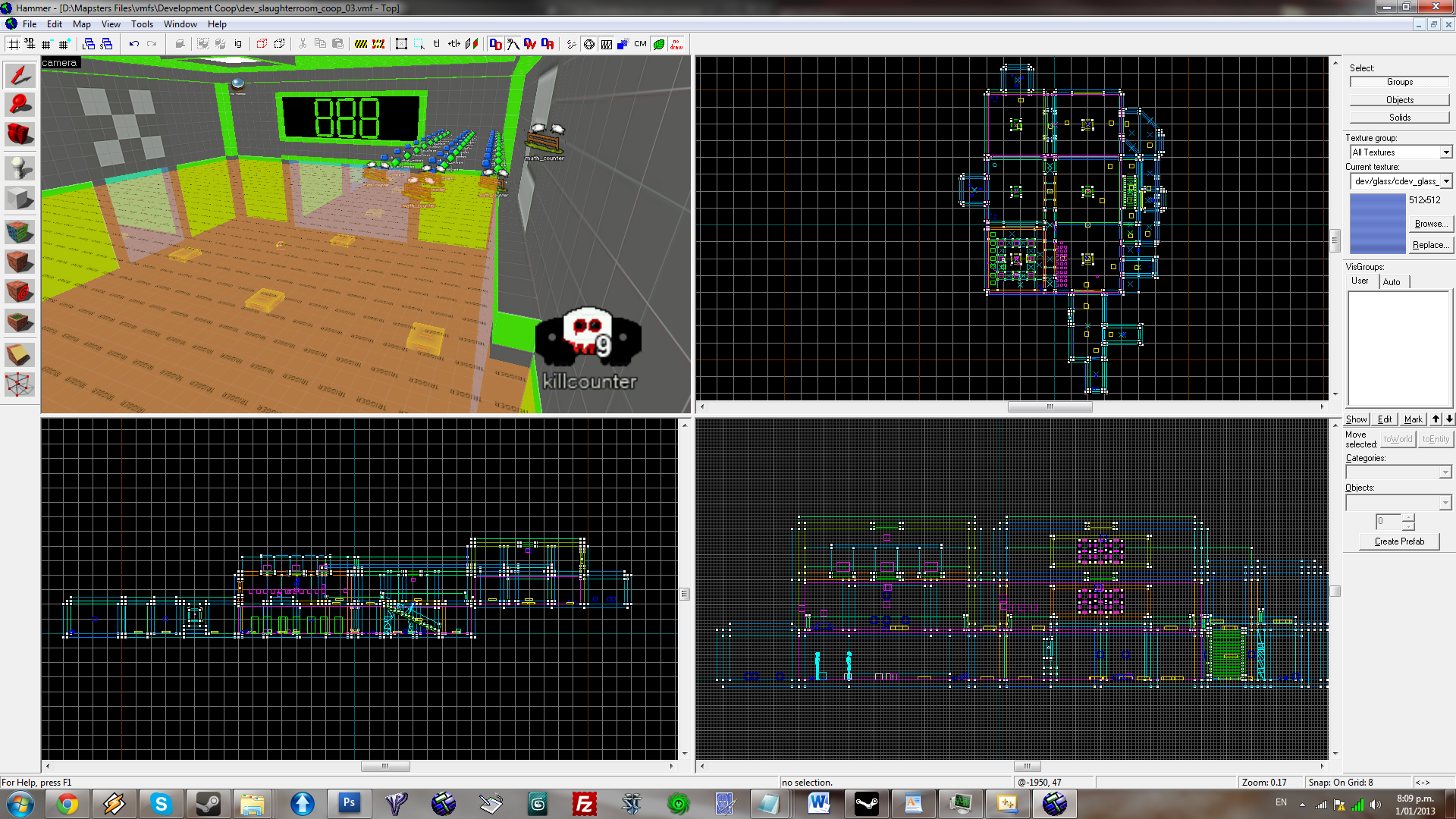 Amongst new code I have incorporated 2 new entities so far consisting of a kill counter that no does not need templated npc's in hammer in order to count then and can be used in hammer each zombie kill and then used in triggers such as opening doors or locks for weaponry, the second entity is a zombie maker that will allow the mapper to variate between the different zombie textures for different areas such as the brown environment below. 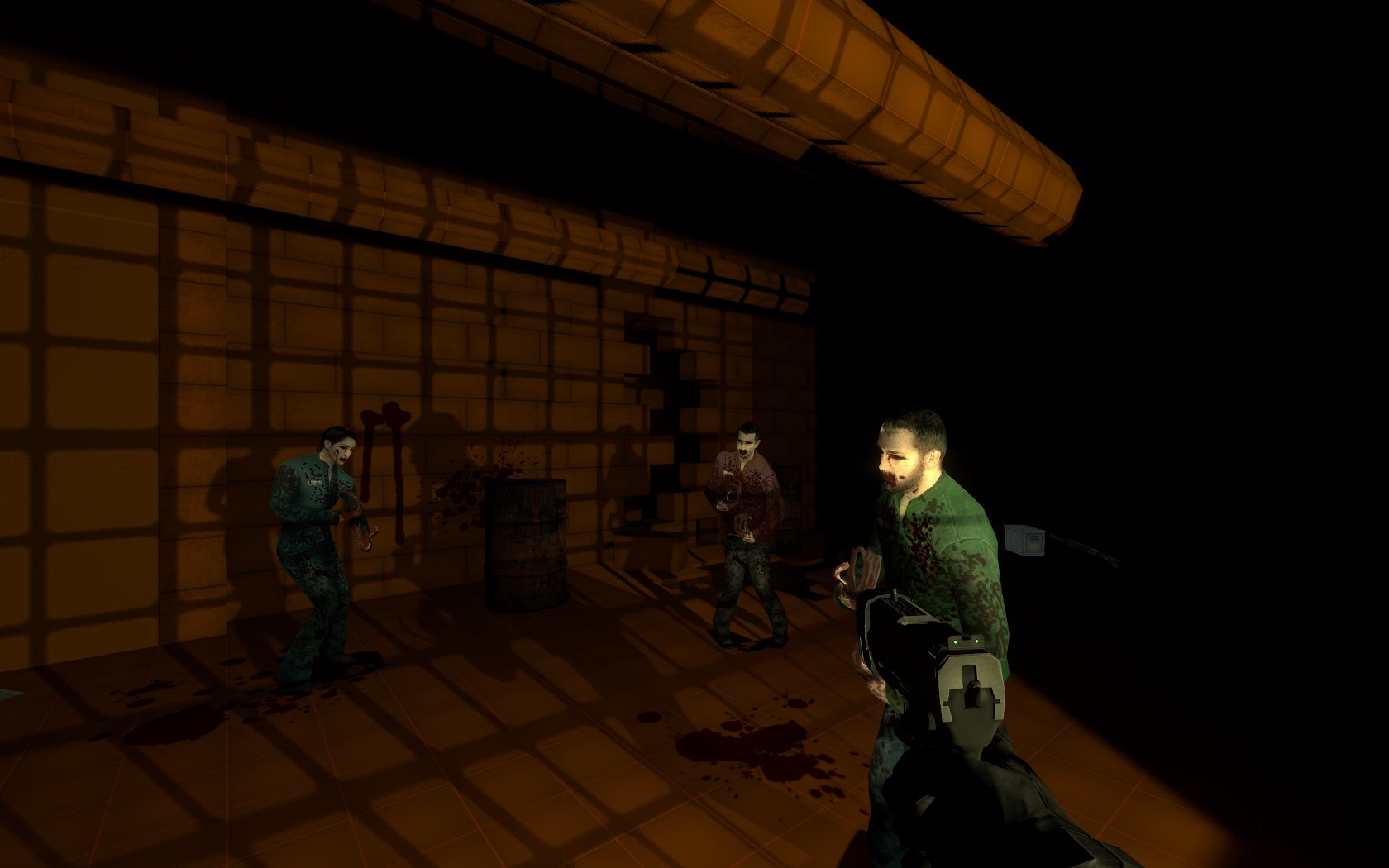 Above is an example picture of just half an hours worth of mapping using a single projected texture, a couple zombie models and textures. Very basic but imo it's very effective for a multiplayer game scene.

One more update to post to everyone after a video request is an alpha game video of slaughter houses that still requires a lot of changes towards it but it shows all the the above updates and a general idea of how the map design will look when using green dev textures.

Enjoy, be safe, and have a happy new year moddb.

A very detailed description of the TDP Developer's modding history with images of previous games and creations of maps, models aswell as a back story...

An update on some progress on dev progress finding out how it should break. A teaser of an upcoming update as well as a new facebook page for easier tracking...

A big update of destructible tiles, walls, more puzzles and everything bringing this one step closer to completion! ALSO a promotional downloadable background...

Future updates will come but for now it'll stay this way until i can get my personal life going properly. Until then, enjoy mapping and coding Hammer...

The Source Code for Hammer Deluxe. DO NOT DOWNLOAD THIS IF YOU WANT THE GAME. Advanced Users Only

The files in order to make maps, play them as well as other peoples maps. Regular Users Download This

how i use this with other maps

It has to be used for or converted to Hammer-Deluxe maps.

what do i do after installing and running the mod??

You can load the example map using console or make maps using Hammer.

how do I get out of the main menu

To play a map? You will need console that you can turn on by pressing the tidle key ( ~ ) Then entering the command "Map (mapname)".

no how do i start working on on mod?

You can start here
Developer.valvesoftware.com