Odyssey is an open-source music resource for use in CE content, using the same synthesizers and samplers responsible for the Original Soundtrack, with the goal of providing a modders' resource of a high fidelity nature, that is faithful to the feel of the original score. Music examples and completed arrangements can be found in the mod page's Video section.

Hello hello! I hope you've all been safe and secure during this crazy year, it's been a bit of a while since the last update, but I bring a heckin' cool update regarding a bunch of housekeeping things, as well as updates on Odyssey's music so far, and where you'll see the content going forward.

JUST CAME UP FROM SONGNAM THIS MORNING 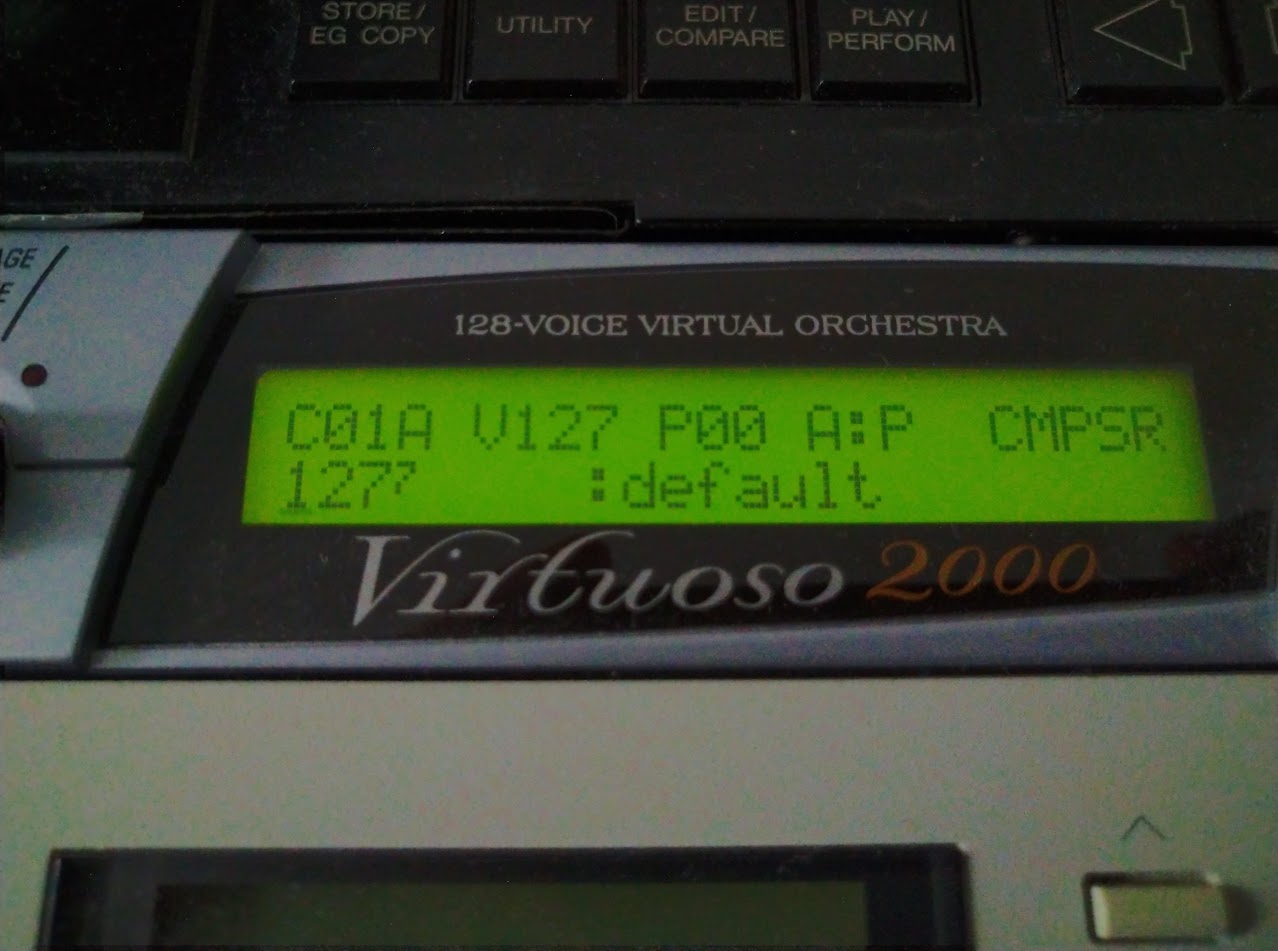 The hardware gear used in the project has been updated with additional gear sourced recently, including the "Composer" ROM that now brings all of the sounds of the factory Proteus 2000 configuration to my Virtuoso 2000. This includes such sounds as the percussion from Under Cover Of Night, as well as some Halo 2 tracks like all of Impend's percussion. The only ROM remaining to acquire is the "Protozoa" ROM, a (unfortunately very expensive) compilation of the Proteus 1/2/3 sounds with additional patches that make used of the Proteus 2000's updated hardware. Protozoa is responsible for the main rhythm section of Gun Pointed At The Head Of The Universe, so is definitely a hardware goal I'm still hoping to obtain next year. 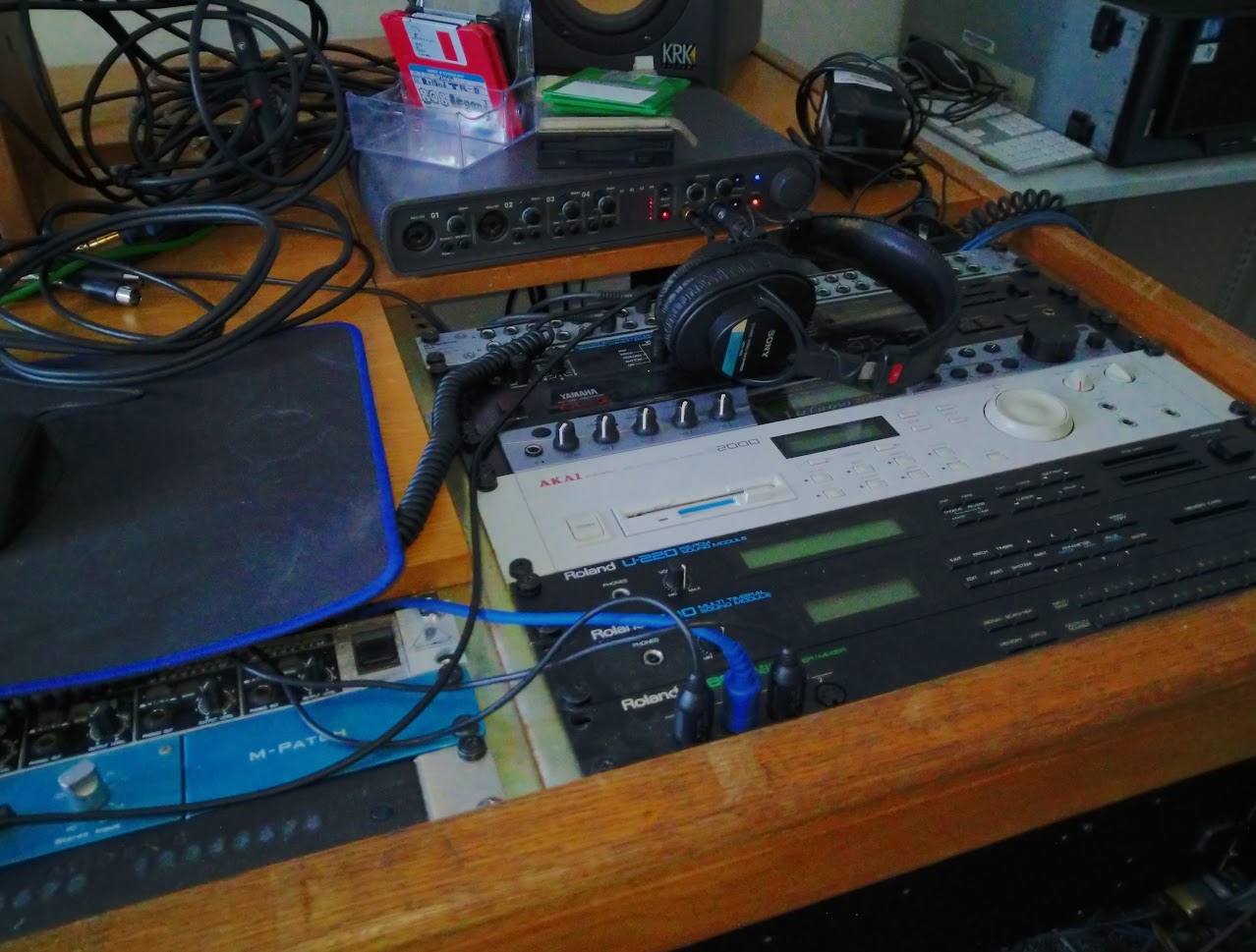 I've also since found an AKAI S2000 sampler that was left for dead at a local electronics recycling shop, and managed to save it. It was extremely dirty on the exterior but I cleaned it up and it works literally perfectly like new. I've since cleaned the floppy drive, made some backup system disks and installed it with expanded memory, up to the 64MB maximum. This sampler wasn't used for the production of Halo: CE to our best knowledge, but may come in handy for reading and playing back AKAI format sample CDs, once I acquire a SCSI2SD adapter, or SCSI CD drive. One such sample library we believe was used for at least Halo 2 was Spectrasonics Symphony Of Voices.

We know that an E-mu E4XT Ultra sampler was used, so it's possible that the discs actually used were in E-MU format rather than AKAI format, but it's the best available substitute without the real deal hardware. Here's a couple of screenshots upscaled from a video collection posted by Marty O'Donnell, which you can find here (subscribe to him too!), and were the main source for identifying some gear, alongside early 2000's interviews about Marty and/or Halo. 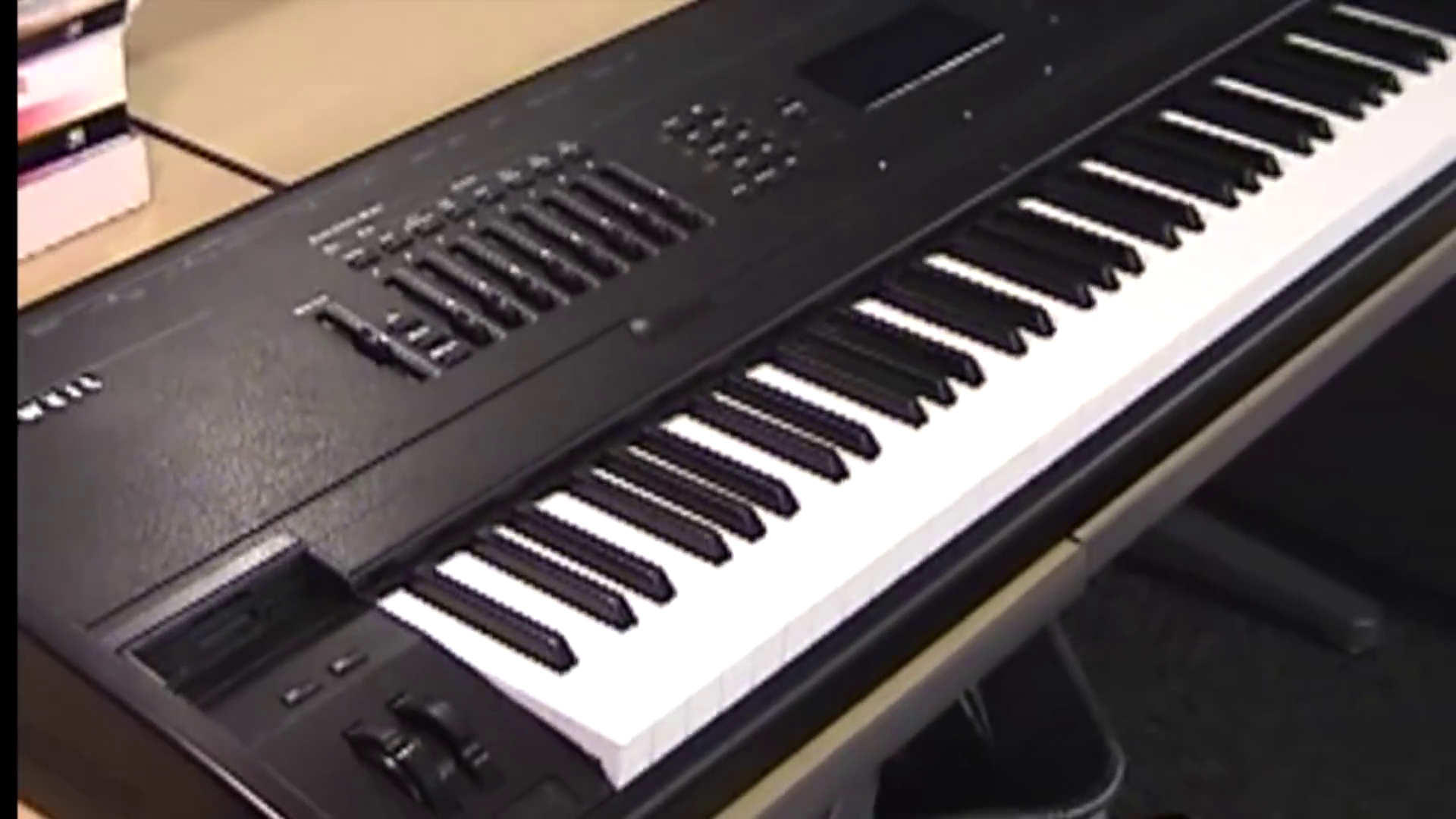 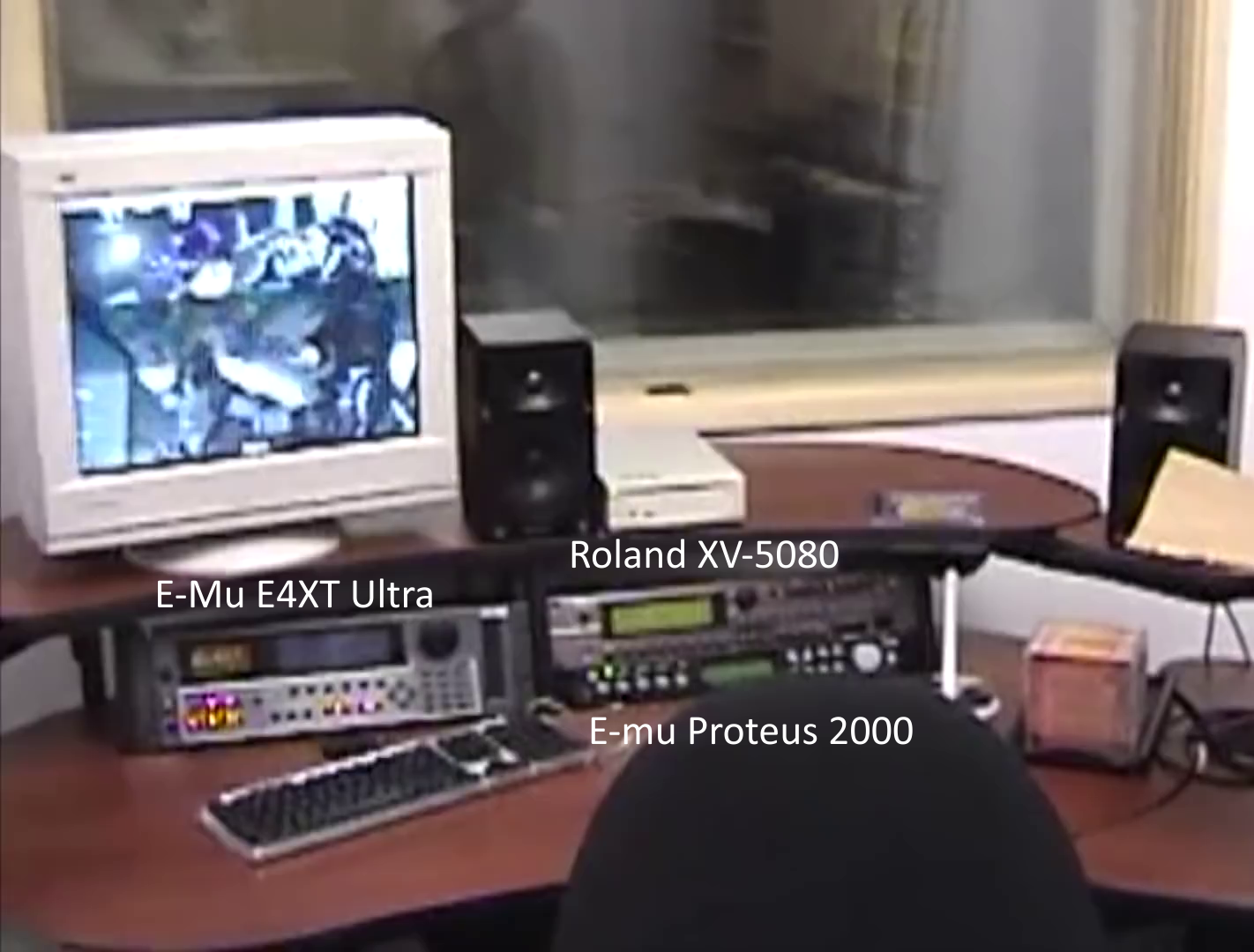 This means the list of known gear that remains to be acquired has now shortened!

CAN YOU POSSIBLY MAKE ANY MORE NOISE?

Blam!!! This is a (slightly curated) collection of all Odyssey progress so far. All tracks have been arranged in the same order as the Halo Original Soundtrack where they appeared, with cut/additional tracks populated in a few spots that I thought would flow well. Some of these are special mixes, edits or still pretty incomplete sketches, but it's awesome to step back and see how far this project has come since the beginning of the year. The tracks that I'm most excited to share with you are the new renditions of Under Cover Of Night and Covenant Dance, give 'em a listen!

Due to logistical issues, Odyssey related content will be offloaded from my personal SoundCloud onto a separate Odyssey specific account. Unfortunately, the SoundCloud embeds from previous updates may stop working, but all articles going forward will be completely fine. A similar issue has crept up with the GitHub, but I'll touch on that later in this post.

Not only has there been significant compositional progress, but I present you some gameplay action! (Note these videos are mostly earlier mixes and may sound slightly different to the newer versions in the Bandcamp album above.

More research has been done towards how the game engine handles audio, specifically music and loops. I have ideas for a new music system that could potentially be implemented with game scripts, but this is far off. It would however, allow for the game to "desk mix" different tracks of music, for example you could have the instruments of some music change instruments, volume, fade into a muffled version without affecting the percussion of the same track.

I've been keeping an eye on the state of Halo: The Master Chief Collection, and certain audio issues with the game have been fixed, meaning Odyssey can now be released for MCC as a drop in replacement of your choice for either the Classic or Anniversary music, alongside the original intended release as a PC/Custom Edition release and resource.

Now the plan was to distribute the stems, tags, data, reference maps and rest of the project via GitHub, however due to issues with file sizes causing syncing issues, and there being a general repo size limit, this won't be viable for maintaining multiple commits and versions of the tracks, so GitHub may only contain compressed, lossy versions of the material, or Xbox ADPCM format tags, which will be identical quality to the original Xbox's sound files. I'm looking into other storage alternatives that would also remain easy for interested folks to keep a synced copy, or otherwise be able to easily track the project, and the best solution right now looks like maintaining a P2P public version of the project, however it's unrealistic for me to do this when I'd have to keep lossless master copies of multiple revisions of the project rendered out. If you know of any solutions to this slight disaster, I'd love to get in contact, you can reach me at the Reclaimers discord, where project discussion is also hosted.

The next milestone right now is to complete all of the music from Truth & Reconciliation, Assault On The Control Room and 343 Guilty Spark, sounding good enough for a public test release of the three above maps for Halo Custom Edition. I was hoping to get at least one of these maps done this year, but due to time and current life, this will probably end up running through into February - April. I'm really looking forward to having proper builds out for everyone to enjoy.

I want to thank the Halo CE Reclaimers and close circle discord communities that have followed the project, kept in touch, and even shed light into research on Halo music. Significant contributions and finds have been made by you that make this project possible, and your love, support and interest has fueled this project so much. I seem to have even gotten the attention of [REDACTED] regarding this project, and I look forward to seeing how much it's going to be even better next year!

Odyssey is primarily my passion project and love letter to the game that wholly inspired me as a kid to want to work in the music industry growing up, and an exercise in improving my own compositional and mixing ability from the time, research and analysis put into this project.

All content related to Odyssey is not for, and never intended for sale or financial gain. No infringement or plagiarism is intended, and all content of Odyssey should be considered first and foremost, technical covers of the works of Martin O'Donnell and Michael Salvatori.

If you'd like to support the work I do, or the project, you can support me via my other releases on Bandcamp, or there are additional support links at my website. Any monetary support goes directly to helping to purchase and acquire new (well secondhand for a lot of this stuff because it's old and/or darn expensive!) gear that will ultimately improve the accuracy of this project. The remaining identified gear listed way up above in this article are the kinds of things that support would contribute directly to. This is of course not required and only if you'd like to, otherwise you can also follow my other and personal music stuff at Soundcloud, my website, and my Discord. I also post random crap, including upcoming music videos, Odyssey stuff and mematic content on YouTube.

That being said, thank you for reading if you got this far through, though if you have insomnia, hopefully this post cured it! Have a safe and happy holidays, and I'll reach out to you again next year!

The first of many development videos to come. VKMT presents our debut presentation on YouTube about Odyssey.

First attempt at the classic Halo percussion inside! See some classic cutscenes but hear some new music! (Note, just a mockup, music doesn't match the...

New track created for the Engine Room section of The Maw.

Test release of Shreddin' recreated and available in .ogg stems, including a c10 specific "radio-mix" version. Ready to render to WAV and compile with...

You are an absolute genius.
The amount of work, knowledge and research you made for this project it's almost insane
Sadly, it's "only" music for most of people, but as a musician I can tell how much you love that universe
Great work, truly