I've decided to put a Moddb page up for this due to the request I've received. This model pack replaces all models for Half-Life, Opfor, and Blue-Shift. But I also intend to replace models for these mods. Azure Sheep, Point of View, Sweet Half-Life, Escape, Case Closed, Decay, and my most favorite, Residual Point. Since Gman's Golden Model pack is somewhat either incomplete, or it taking a while to finish, I think i'll do my Ultimate Pack for Half-Life and it's Mods. Well what are you intending to replace, Luck3y Charms? Well, I intend to replace, yes, of course models. Sounds for Realistic effects like real sounding gunfire, And misc. 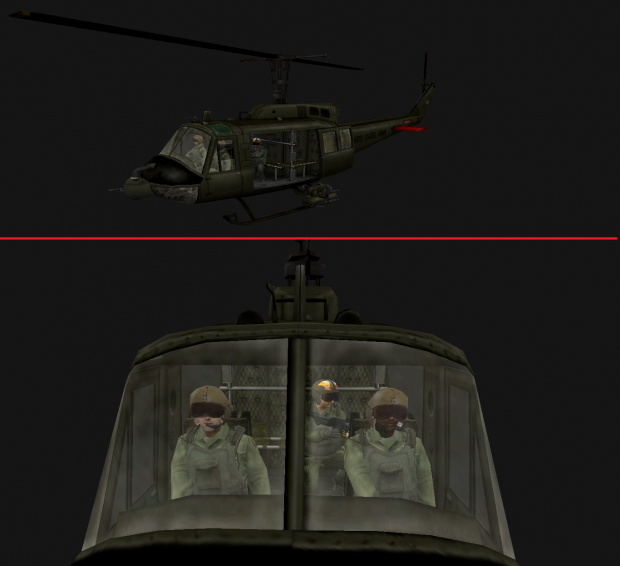 One thing I have to say is the wifi in afghanistan sucks. I'm surprised it even let me upload these pics

Well, what I've worked up, albeit old, is the troops in Heart of Evil.

D3ad's Huey along with the crew in correct vietnam era flaks and the door gunner now having a helmet.

now, for the opfor troops.

I've heard conflicting reports on who or rather what unit or branch they're supposed to be in.

One guy said they were Army Rangers. The youtube trailer by Postal123 said they were Marines. Which is interesting considering the vanilla namgrunts are wearing the ERDL camo, use mainly Force Recon before becoming more widely available to all personel in the Marine Corps and later all the armed forces.

Then we have that they're 1st cav, which is a regular Army fighting unit. Granted, the air support they get from Gilmore stated he was 1st aircav, I doubt the ground troops would be of the same unit.

But then here I am. I decided to just make them a fictional Army unit modeled after the rangers. I've weighted to see if I wanted to give them drab or go with the Vanilla look woth Erdl. I went with drab since it was most common outside of special forces. I also gave them the resident evil merc's logo on their sleeve due to HoE itself making nods at the RE series.