Yet another perspective of a security guard during the black mesa incident, however not as gifted or lucky as the others who "escaped"

While a few of you probably saw these on my Twitter but I have been working on a couple major things: The reworked Hassault and new 3 round burst silenced DMR weapon. I don't have much to show for the new DMR weapon that's presentable but I do have some stuff to show off for the reworked hassault and future content news. 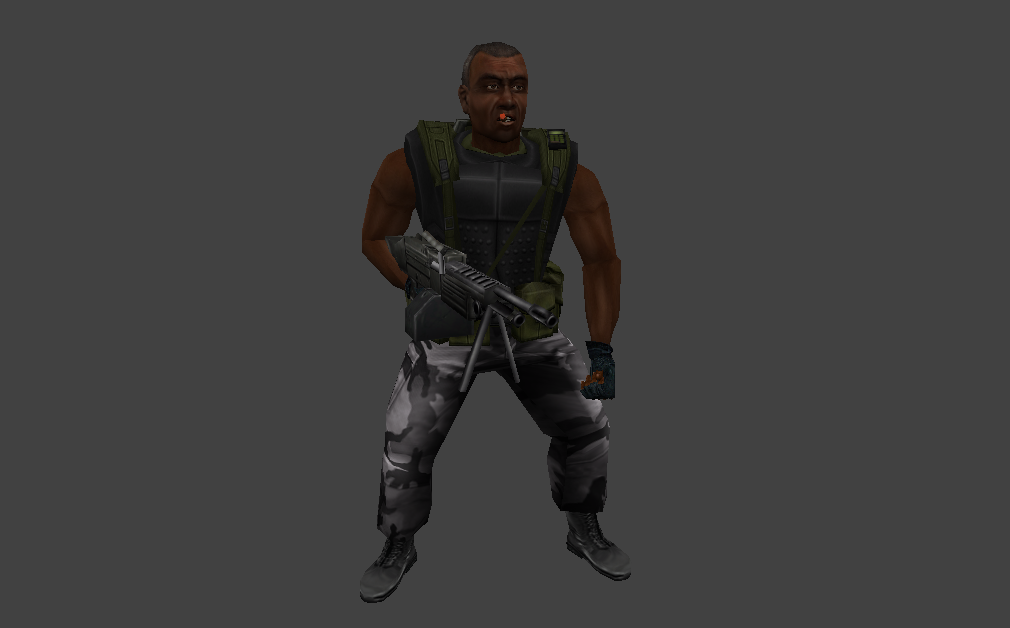 As you can see the biggest glaring difference is the switch from a minigun to an M249 SAW, this change was done because it made more sense contextually and adds consistency with the official expansions. He remains mostly the same functionally but obviously changed to accommodate the new weapon, there are also some small touch ups like pain and death sounds I'm working on and will hopefully be able to show in the future. For now however I only have these small sneak peeks to show

As mentioned I don't have any presentable material to show for this weapon I have pretty much all the details to give, the plan is to make it an FN SCAR17S but at the moment I'm using a modified gamebanana skin as a placeholder, obviously I don't have permission to use it so I'm not going to present it here on the article or keep using the model to the point of release, I plan to somehow get a model made from scratch whether it be me or if I stumble upon someone gracious enough to do it but for the time being I can only just describe how it's going to work. As I mentioned it's a DMR (Designated Marksman Rifle) which means it has a scope but isn't a full on sniper rifle in the same vein as an M40A1 or L96A1 but serves a similar purpose just not to the same extent as well as acting as an assault rifle, also mentioned is the fact it will shoot in 3 round burst and only in 3 round burst mode to add some uniquity to the weapon but to also add the ability to have quicker take downs on enemies from mid to long range while maintaining accuracy. It will also use a not so new ammo type of 7.62x51mm which as you may remember was featured in Opposing Force as the ammo type the M40A1 sniper rifle used, both of which will be making their return here along side this new addition. How will it fit in the universe may you ask? I intend to go the same route as weapons like the RPG to where you never see any enemies use it but it's implied they carry and use it but in this case I plan for the black ops assassins to be the ones to carry this weapon and have even lingered on the idea of actually implementing this as a weapon they can be seen to carry.

Possibility of an Original Soundtrack!? + Extras

Recently one of my very good friends Dirty Kermit has offered to help me work on this project with mapping but we have both touched upon the idea of making tracks for the mod due to his talent in the field of composition (His SoundCloud) which can add a new layer of atmosphere to the project if it manages to become a possibility.

Today is the day and what would be the anniversary of sorts of the day that the resonance cascade takes place on and ironically enough my birthday shares this day as it's anniversary, whether I be a direct result or this is purely coincidence is unknown to me but I believe the former due to my unconventional methods of doing things

Due to Xash being more convenient and having more features this project is now being moved to Magic Nipple's Xash 2019 build.

After years of conceptualizing this gun in multiple mods I have done I have finally made it become a reality. this is the AA12 full auto shotgun in half...

Development has resumed for the first time in a while and some other fun bits.

Development has continued and I have opened a new discord server!

u should call it Full Shift

I will probably ask the most interesting question, but will the mod use the half-life extended SDK?

No, I originally was going to but overtime I started to dislike the direction of the mod, Extended just has way too much in it and most of it I wouldn't personally use. Stuff like the tons of variations cause issues with the set of models I'm using and generally just has too much for me to have to fiddle with if I want to tune it all to my liking. Right now I'm just using spirit 1.8 but I do intend to adopt ideas from HLE such as the rocket grunts but outside of that I'm not using any HLE assets

Well, I understand you, there is really a lot of content in the extended one, and it will be difficult to disassemble all this for a small development team.

What happend to discord?

Got overrun by spambots at some point a few months ago.

what happened to the discord server?