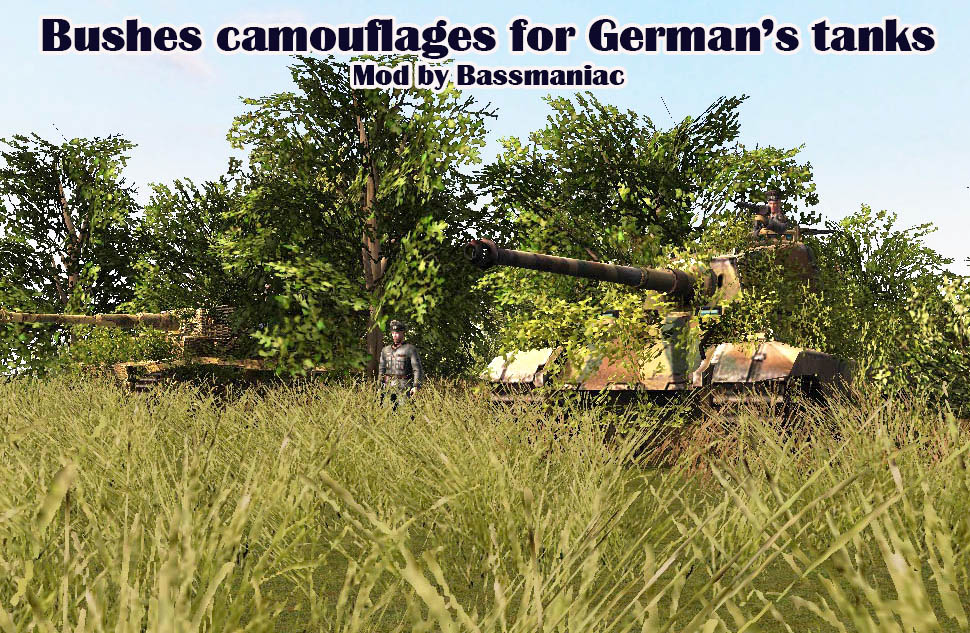 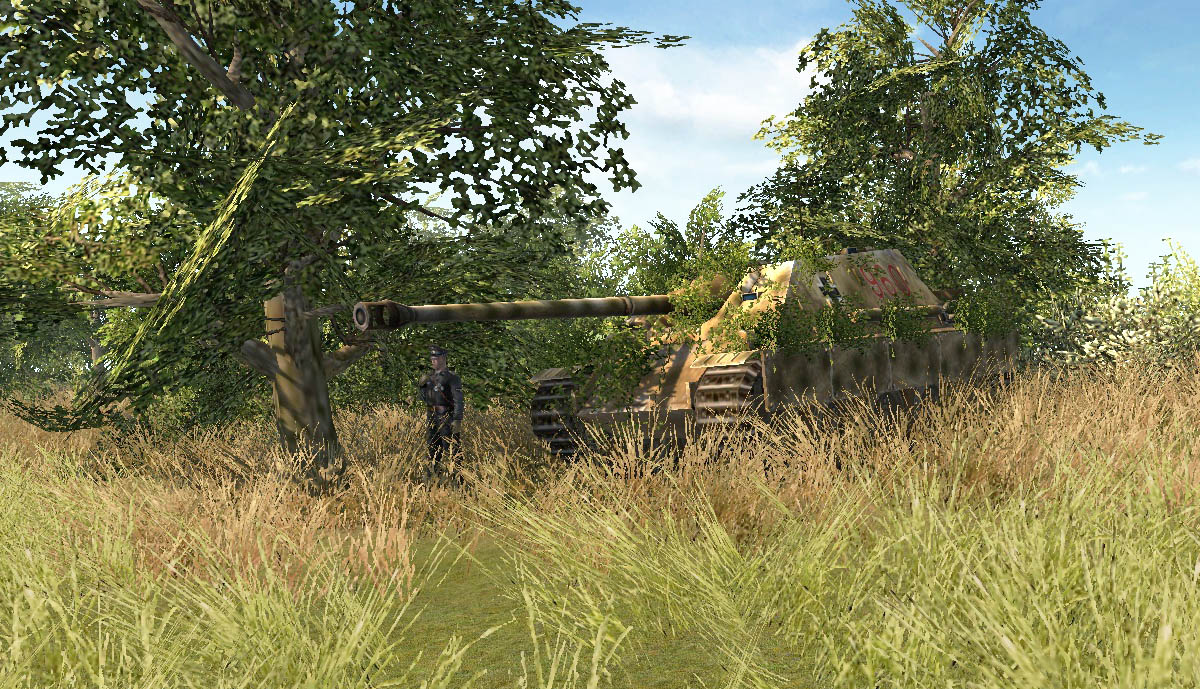 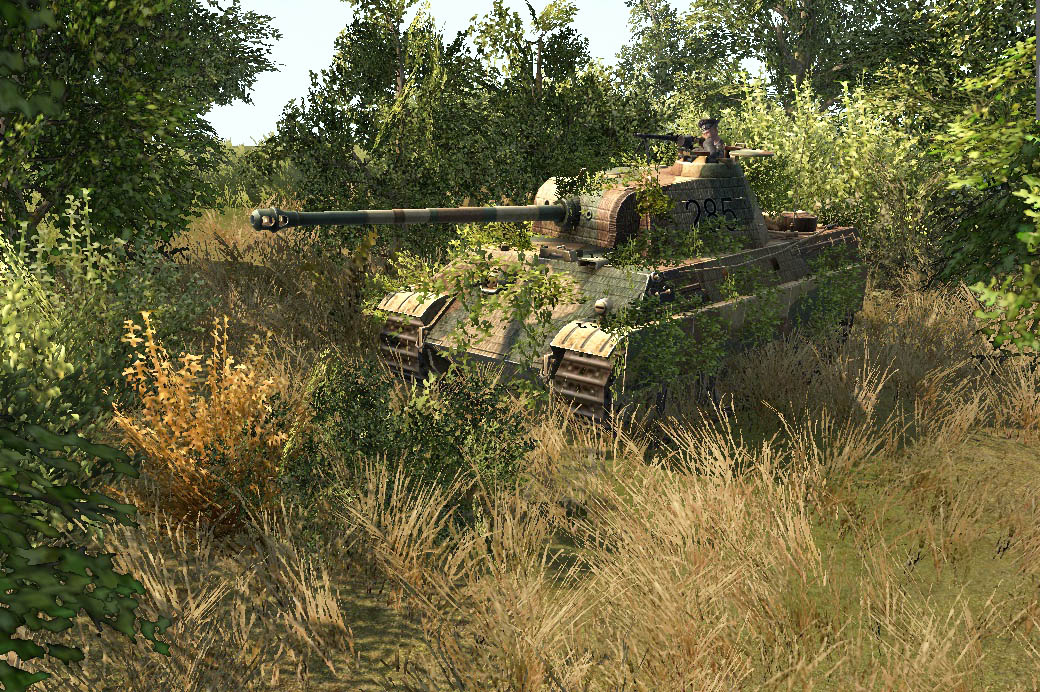 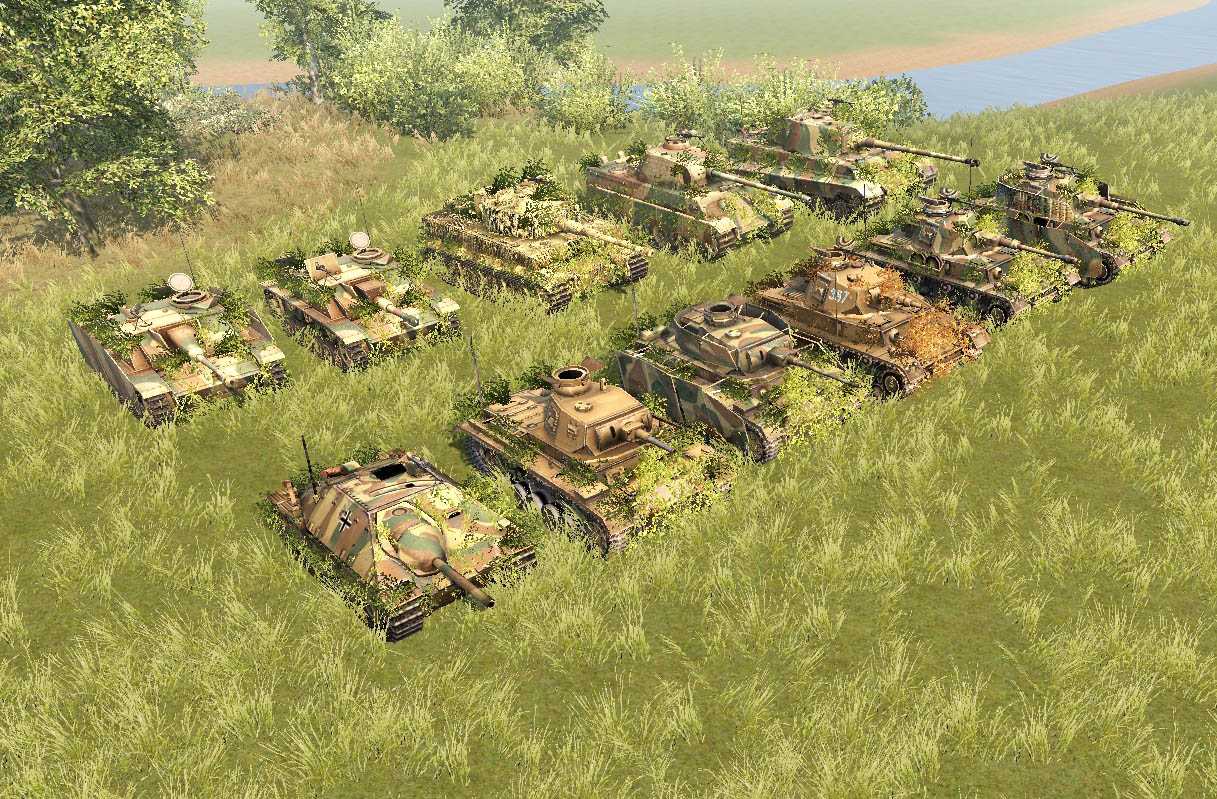 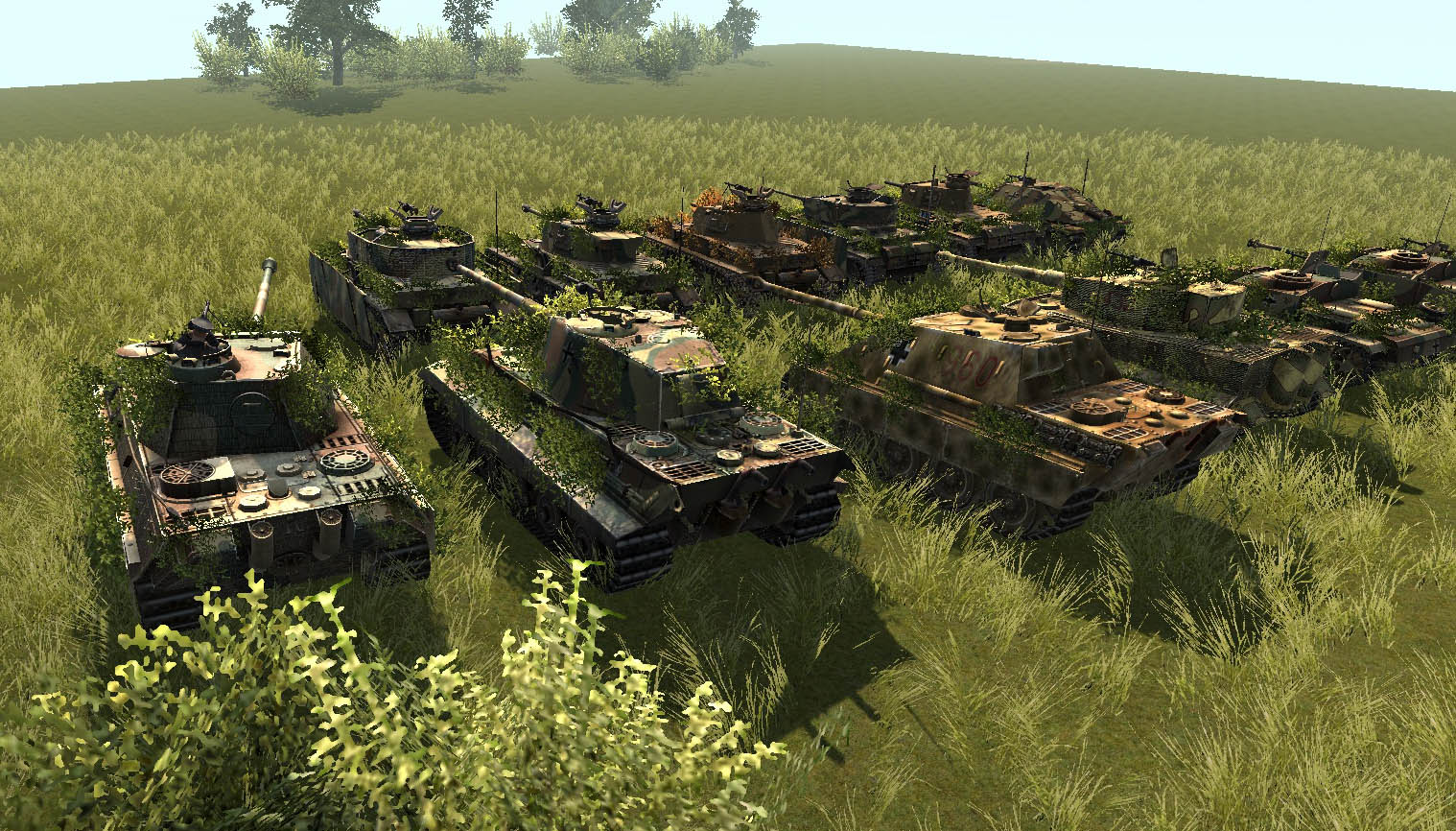 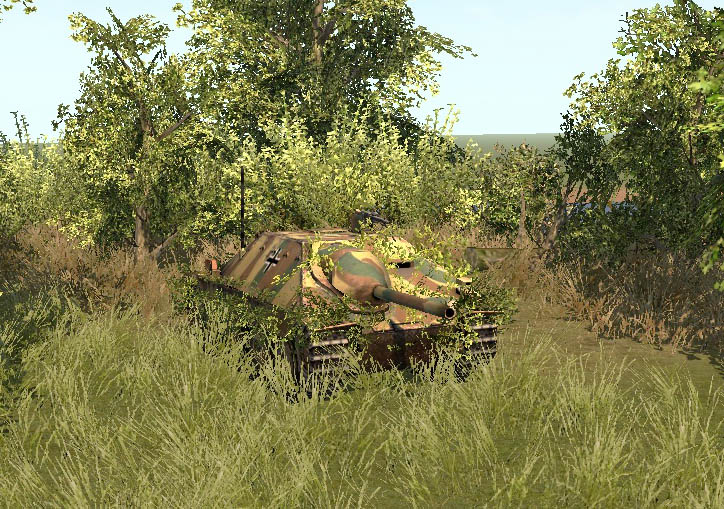 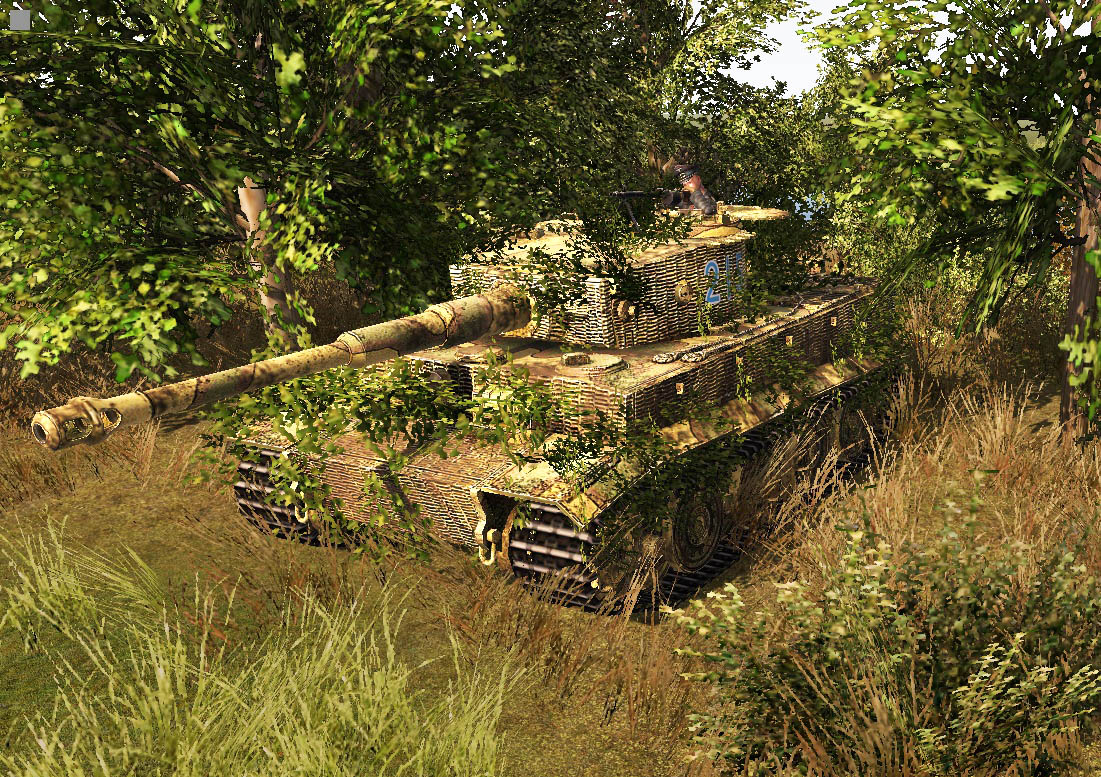 Hello!
As I promised, here is my mod to add bushes on most all German's tanks: It had realism, at least for the Normandy 1944 front..

During Normandy Front in 1944, the air supremacy was for the allied, so the Germans had to camouflate their tanks with many bushes, and used their tanks mostly for ambush tactics with the cover of trees..

This mod can be use alone or with other mods, and I've tested it in single player skirmish mod, and it should be also ok to play in coop and multi-players (thanks for your feedback in multiplayer game)

Notice that Modders can change the bushes type in the GEM editor (with the textmod option): There is 3 green bushes, 3 winter bushes, 3 autelate bushes and one burned possible for each tank .. You can see the result on the 3 pics of the Hetzer ;)

There is also differents enumerators types (choose digital folder number from 4 to 10 in the editor)
Goodies: skins and sounds (turet, motors, guns..)

If you have difficulties to download on moddb, you can also find it here:
Mediafire.com

I hope you will like this beasts..
Cheers,
Bass

If you like this mod, Please vote for it!

Thanks for voting and helping German's Vehicules Bushes camos by Bassmaniac on it's quest to become the 2022 Mod of the Year. You are now in with a chance to score some free games from our #modlove collection. Help this mod secure more votes by embedding the widget (or link) we have included below on your favorite sites.

Mod to add bushes on most all German's tanks This mod can be use alone or with other mods, and I've tested it in single player skirmish mod, and it should...

i try it right now, i already like it :)

How do you install it?

when this mod is out?

demn the sound of tiger is too beutiful thnk you :)

Great screenshots bass! Looks way better then before.
I made some experiments in the past with some bushes for a bunch of pictures and used a foliage that was pretty thick and nice (Sadly I forgot the object name) but still look at my three pics:
Moddb.com
As you can see I tried to let the drivers hatch be uncovered so he still can see where he's driving :P
Keep it up!

The current Mediafire link seems to be the old version ?
It shows the date 6 October whereas you apparently have made an update since then.

Don't worry Ovo, the versions are exactly the same. (I didn't updated this mod yet).
Regards,
Bass

OK, good. I thought you had fixed the green to burning bushes thing already.

Hello Bass,
great mod you got there but I have to criticise that you maybe add more bushes to some tanks atleast (especially the STUG III and STUG IV) because some tanks were almost driving bushes.
Heres what I mean: Ww2incolor.com
Great mod anyways don't get me wrong! :)

Thanks for your comments ;)
I was afraid of the "too much" effect but I agree with you and your pic is a good example that German's tanks in Normandy were called "wheeling bushes"!
Note that I'm steel working on this mod (trying to make bushes on tanks burnable, explodable, movable when hit) and I will also try to increase the density of bushes on all tanks for the next release..

The density of the bushes in MoW simply aren't thick enough to provide the look your want Grune, they aren't' even models per se, just a very basic mesh using alpha channeling to create a leaf effect. It would take 10-20 bushes to create a dense look and you would have to alter all of their co ordinates slightly to make sure they covered all the gaps.

It's a little gallerie of pics of my last work on this tank: I think it more realistic now with more density for covering against the planes.. Tell me what you think about it..

Note: I've searched but didn't found yet the way to give to theses camos bushes the same properties than the bushes are in game (ability to move in the wind, to burn, to be crushed..)

As far as I know, as soon as you attach a model to another model, it adopts the parameters of the mother model i.e the base, so animations e.t.c are not possible.