In this update, we look at various Tech structures that have been added to this mod, and some additions to the Revenant arsenal.

In this update, we look at various Tech structures that have been added to this mod,
and some additions to the Revenant arsenal.

Another three months since last update. Yay me. Besides spending my time with boring RL stuff like work, playing other games and vacation, I also managed to find some time to work in this little project I call my mod.

As half-revealed in the previous update, I had made more changes then I could show in a single update. The change that has the most impact is the replacement of the Revenant Construction Crane by the Crawler Construction Vehicle. In a wild idea to make the mod interesting / unique, I toyed with the idea of making an hybrid between the Generals Dozer mechanics and the C&C MCV mechanics. The end result is the Crawler: a large vehicle that functions as the Generals Dozer for base construction and repair, but has the armour, cost and speed of a C&C MCV. This makes dozer spamming less of a thing, but also makes hunting dozers more difficult due to the massively increased armour. Instead of being one of the weakest vehicles on the battlefield, your construction unit is now one of the toughest, rivalling super-heavy tanks in durability. As mentioned, the downside is that it's also almost as slow as a super-heavy tank, and also costs a lot more (currently $2000). My intention is that in the earlier stages of a match you must make a conscious choice between spending 2k for an expansion Crawler, or use that money to create more forces instead. Time will tell if this mechanic will work out, but so far I like it.

Besides this major change, I've also tried my hand at creating some more tech structures. This was a good lesson in figuring out how vZH (re)uses across multiple models, and recreating the style of vZH tech structures. Additionally, I have worked out a way on how to create snowy textures for models, which I will use for structures from now on.

As for the tech structures themselves, I will showcase two in this update. One was created because I liked the idea, and the other started out as a joke model because I was bored, but eventually replaced an ancient-old model I had for a similar tech structure. Some of you can guess which one is which. 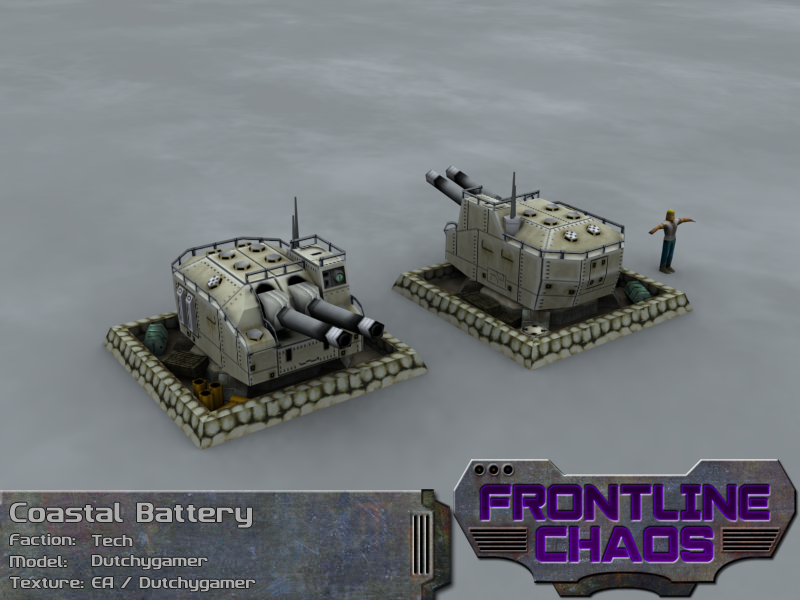 Over the years, many Coastal Batteries were constructed by various countries to defend their coastline against enemy naval forces. Various designs exist, of which the fully-enclosed twin 18cm is the most popular design. This design is based on an up scaled destroyer turret, and can fling a pair of shells over extreme distances. In a pinch, the guns can also be trained on land targets, with devastating results; shells designed to sink ships work just as well against armoured vehicles or personnel. Due to this, there are instances where batteries have been constructed with the intention to deter land forces instead of naval forces.

A Coastal Battery is designed with the intention to bombard forces from extreme ranges. The main downside is that it cannot engage enemies that close in on it. Additionally, even with the high-velocity shells, targets on the outer limits of the range can evade the projectiles if they stay moving. The Coastal Battery also lacks a bit in accuracy, but makes up for this by dealing massive damage in a large area on impact. 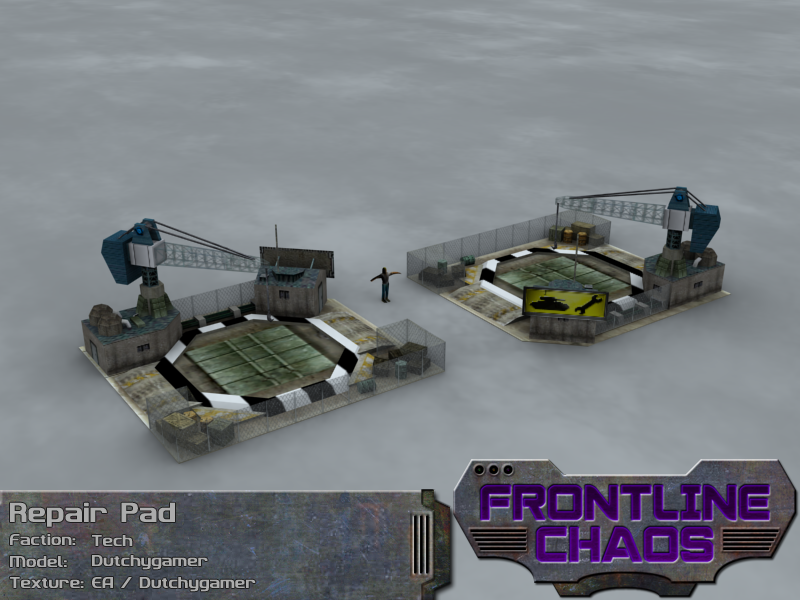 The Repair Pad is a large structure which can be used by commanders to quickly repair vehicles on the battlefield. It comes with a large service depot to quickly repair a singular vehicle, while nearby vehicles outside the structure will be slowly repaired as well. Most of these structures are leftovers from previous conflicts, but can easily be reactivated for use by capturing it. 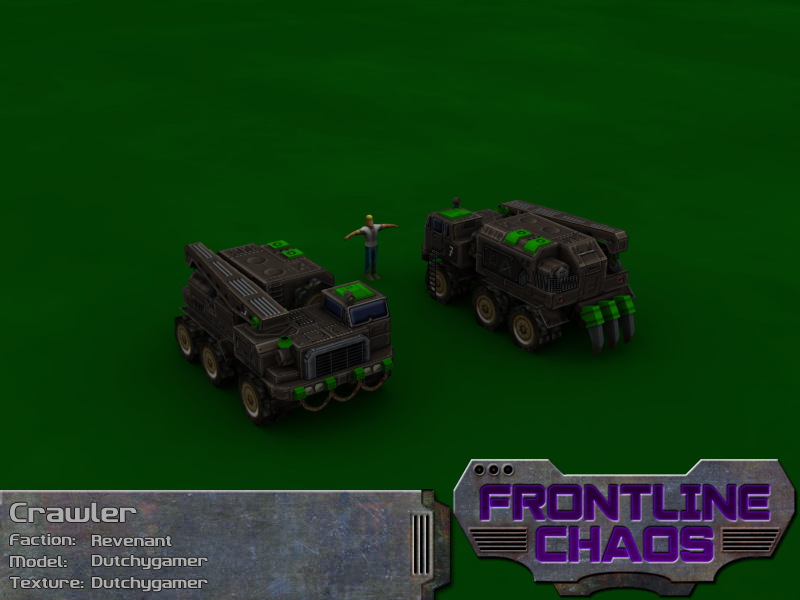 Where you find a Revenant base, you will quickly notice one or more massive 6x6 vehicles rumbling around. These vehicles are Crawlers, and are used by Revenant forces to construct and maintain their bases. Each vehicle is equipped with various tools and supplies for these jobs. A large crane on top is used for heavy-duty lifting, and the massive 6x6 chassis can carry the vehicle across nearly every terrain type. Piloted by a mix of civilian contractors, Revenant engineers and other volunteers, they form the backbone of each Revenant base.

These vehicles replace the fleet of the much more fragile Construction Cranes used before the outbreak of the Frontline Chaos conflict. While the cranes were easier to maintain and slightly more nimble, they easily fell to focussed fire. The Crawler on the other hand, is a very tough nut to crack. Easily rivalling the heaviest tanks on the battlefield in both protection and size, a Crawler can shrug of most damage with ease, and continue doing its job. The downsides are that an individual Crawler is twice as expensive as the crane it replaces, and is also rather slow. This was deemed an acceptable trade-off compared to the boons it returns. 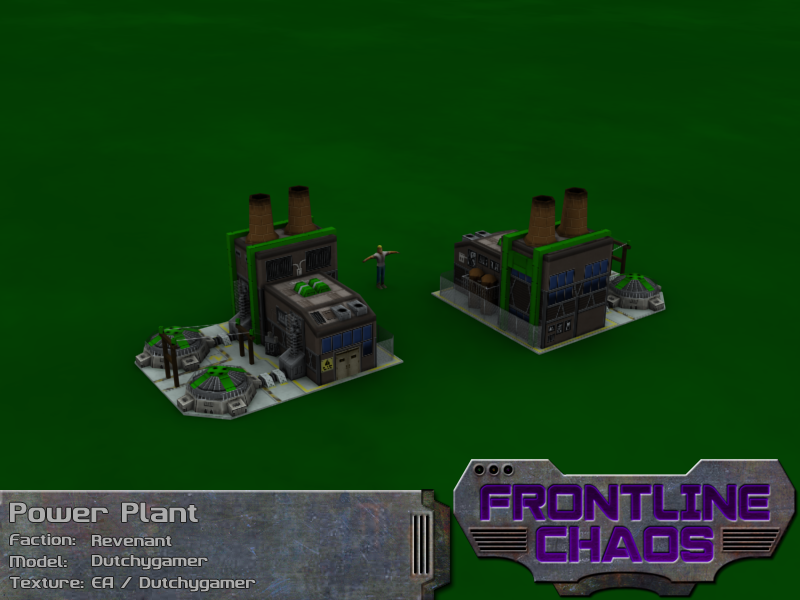 Revenant forces rely on fossil-fuelled Power Plants to produce all the electricity needed for their bases to function. Using an unique open-turbine design, it can run on burning coal, oil and gas to generate power. While not the most efficient, nor the most environment friendly way of producing power, it does the job well enough for it to be the primary power supplier for Revenant forces.

That's it for this month's (or quarter's) update.
Dutchygamer signing off.

that poweplant and repair pad looks nice, keep it up man.

Lol, I like that random person in every render for scale

I found that with the various render shots that I had, it was difficult to see how large the model actually was. Hence I added Garry the Scale Guy :)

I like your design for different factions quite a lot, keep at it man - mod looks awesome, every bit of it. Waiting patiently for the playable release - want to see it all in action!

I love about MCV