Fortress Forever is a Source Mod inspired by Team Fortress. Our independent team has created this mod entirely from scratch. Fortress Forever should please those who have stuck with or been a part of QWTF and TFC over the years while at the same time doing more for new TF players than any prior Fortress attempt.

A new update to Fortress Forever has been released.

Update: A few major things slipped through the cracks of 2.42 and are wreaking havoc. Primarily, a client crash related to joining a server while a laser grenade is active or thrown, which has been found will be fixed in 2.43.

We also plan on addressing a few balance concerns, particularly with the slowfield, which is currently too strong. We made some last minute changes before 2.42 was released that needed more testing than they received. The Super Nailgun clip will also be raised from 30 nails to 50.

This balance/bugfix patch will be released within the next few days at most, so stay tuned.

It has actually happened: 2.42 is ready and is finally being released. Download links and the changelog are below.

A deserved (and belated) thanks to an invaluable community member, Bully, for helping us out big time with the training voiceover (and the announcer sounds that were added in 2.1!). Thanks also to hlstriker for implementing the friendly soft clipping. 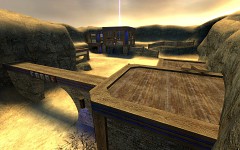 
Downloads removed as we update the installers to include a bugfix

Posted about the update here: Modsentry.com thanks for keeping such a great mod alive