Today we have our second render of a "BraMit" suppressor, this time for the Mosin rifle. Additionally, links to an animation Devblog and a map-making video series.

Today we have a render of yet another soviet silencer. But first, in case you missed it, Roughbeak posted a devblog covering upcoming weapon animations over on our forums. See it here. Additionally, Ts4EVER has also been covering his process of making an FH2 map in a Youtube series here. 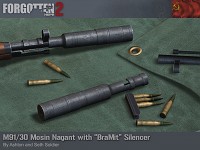 The Soviets had put some effort towards the development of a practical suppressor for their rifles throughout the 1930's, but every design had failed on one or more criteria. It wasn't until 1940 that the brothers Mitin presented an acceptable design.

The BraMit suppressor fixes to the Mosin rifle in the same way as the bayonet, and has two expansion chambers each sealed with a thick rubber plug. It was used with special subsonic ammunition, which drastically cut the effective range but allowed for extended life of the rubber seals and much reduced sound. Somewhat more than 50 thousand were constructed during the war, and ours was made by Ashton and Seth Soldier.