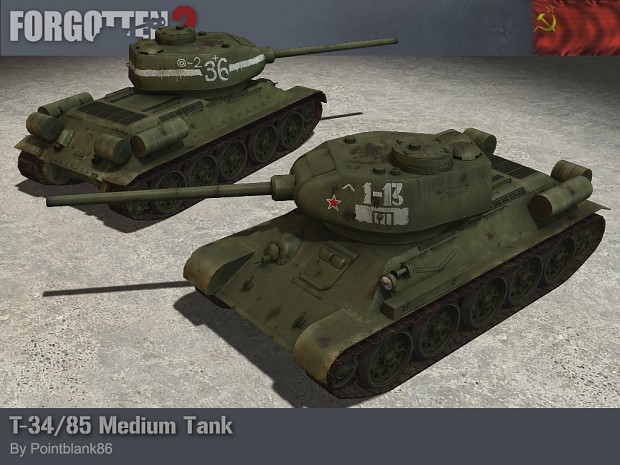 Yea one of these is in czech army (is or has been i don't really know now) with name Žižka :D

This is based on the so called "kill records" of the panzer devisions. T-34's where very repairable so much more then 11 000 T34's survived WW2

true,true. no one usually takes repaired units into account.

And I heard that they could be repaired in the field due to simplicity.
As the creator of this tank said, "Even a fool can create something complicated"...

I am probably wrong but didnt they strap a track segment onto the side of the turret incase they needed to repair the treads?

Only on paper? I think that also in real life it was great tank. You can't count terrible cooperation of different parts of the Red Army as tank disadvantage. Reason why so many of them were lost were many, but definitely not because it was bad tank ;).

And it wasn't bad.
It actually was a threat to German light tanks, and was immune to some of their early AT guns.
They actually hit the niche: something that was able to hit them wasn't as mobile or numerous, and more agile foes couldn't do something. Then it all changed of course, but moment was lost.

theres a white verion of this tank ??
because im gonna do something!!

The T-34 evolved out of a project to design a replacement for the BT series of tanks using information gained at the battles of Khalkhin Gol. Tests with increasingly armoured and armed prototypes lead to the initial design for the T-34. With the poor performance of existing Soviet tanks in the Winter War and with German successes in France, the T-34 was hurried into production.

At the time of the German invasion of the Soviet Union in June 1941, the T-34 was one of the best tanks in existence - though only on paper. In the initial invasion, serious problems with mechanical reliability, supply shortages and poor internal layout largely removed any advantage the T-34 had over the Panzers it faced. The tank commander was severely strained by the task of aiming the cannon and the lack of effective observation devices, and the Germans noted that T-34s were slow to find and engage targets.

The second variant on show today is the T-34-85. With the appearance of Tiger and Panther tanks, which were immune to the 76.2mm gun, it was decided that a more effective weapon was needed. The answer was the 85mm ZiS-S-53, which was mounted in a new 3 man turret. Although still not a match for the Panther, the new design greatly increased the combat effectiveness of the tank, whilst the minimal changes allowed production to remain high.