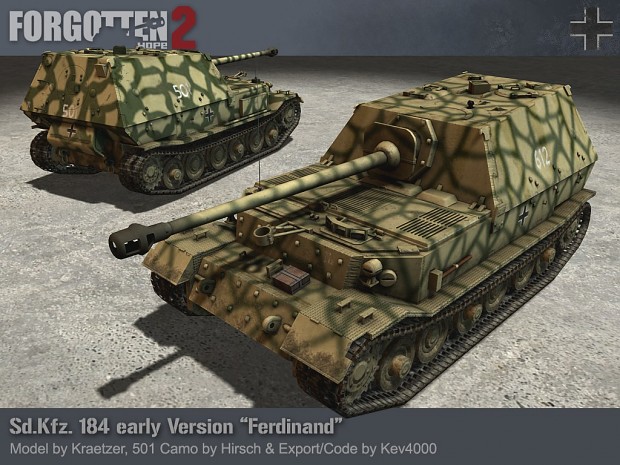 Its a real monster!

This isn't quite the Elefant, since it is the earlier version used at Kursk. The Elefant was modified with a hull MG added.

Ohh. i don't know about that. I thought "Elefant" was always a nickname for it.

Before the MG Was put on, it was simply the Ferdinand. From Ferdinand Porsche

This thing's really powerful looking. Soviet players are surely going to be afraid of it.

I believe the Nashorn came slightly (matter of months) before, and was the first vehicle to mount the long 88. You might want to throw the Nashorn in on the maps were a Ferd would be too powerful, and as an added bonus it could be integrated on some Italian maps too!

Looks very juicy for AT infantry! :)

Better known under its official nickname "Ferdinand", after its designer Ferdinand Porsche, it was based on the chassis of the failed Tiger (P) prototype. It was the first tank destroyer to mount the powerful 8.8cm Pak 43/2 gun, which was able to knock out even the heaviest of Allied tanks. It also boasted an impressive front armor of 200mm. However, several design flaws made it a less than successful design. It was very slow and lacked maneuverability. Since it had no machine gun, it was vulnerable to close assault by Soviet tank hunters and sappers.