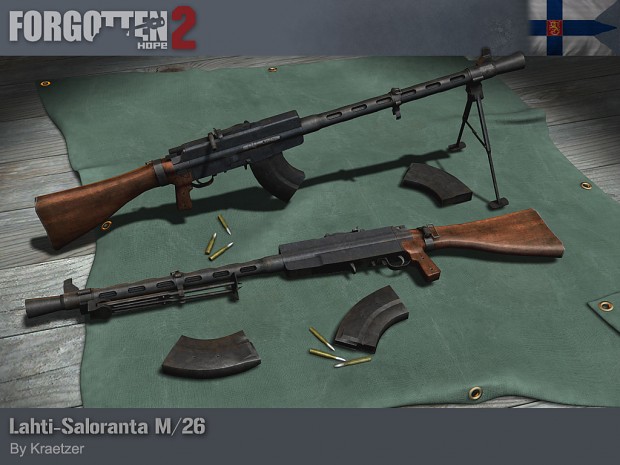 Cant wait to use this!

A vittu to clean!

All of the veterans I've talked to hated this gun lol

Since today i never got any Money for any Model and maybe i will never see something for´em.

Like all FH2 devs, Kraetzer is paid in hookers.

Judgined by the poor design I believe this firearm will serve only as a accurate supplement to the Soviet DP-28 LMG. The DP-28 will provide suppresive fire, the L-S M/26 will pick out targets from afar.

It should be interesting to see Finnish Army players having worse fighting equipment than the Red Army players.

The Finnish don't have worse equipment than the Soviets (Infantry equipment at least). The rifles are basically identical, the Finns have way better smgs.

In winter war yes... in whole WW2 period definitely not.

Suomi was too expensive and PPSh-41 was simplier, much lighter, deadlier in CQC and very easy to repair. PPS-43 was even cheaper then PPSh-41, very controlable rate of fire, very light and very often said to be best SMG of WW2.

I don't really see many things in what is Suomi better then PPSh-41 (definitely not worth the bigger price). Also PPSh-41 had very good penetration.

Yeah the Suomi KP was likely not better than the PPSh or the PPS, the owen however, ***** on both.

Get your facts straight

The M/26 started life when Aimo Lahti was looking for things to do following his design of the Suomi KP/31 prototype. When the Finnish Army put out a request for designs for a new light machinegun, Lahti's design was one of those that was considered. Since Lahti had no formal engineering experience, Lieutenant Arvo Saloranta was appointed to assist him.

After acceptance, there were almost constant issues surrounding the weapon. Saloranta had made unauthorised modifications to the accepted designs, causing production delays and his removal from the project. The weapon itself would jam constantly due to weak extractors and low quality magazine springs. It was also very heavy and had a very strong recoil, and the 20 round magazines were too small.

These issues meant that it recieved the nickname "Kootut virheet" meaning "assorted mistakes" from the soldiers who used it. Its only redeeming feature over the captured Degtyarevs was that it was more accurate. About 5000 were produced between 1927 and 1942, and by 1944, there were nearly three times as many captured Degtyarevs in use at the front than Lahti-Salorantas. The M/26 was made by Kraetzer.