A pack of Battlefield 2 mods to battle away the weeks ahead.

Battle the weeks away with these top community rated Battlefield 2 modifications!
If you don't already own BF2, You can get the full pack on steam.

Check out what the community have been saying and try them out for yourself! 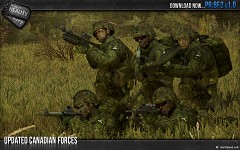 A realistic combat environment for the gaming community. PR adjusts various game play elements including physics, visual effects and overall game play formats. Along with how the game handles, British, Insurgent, IDF forces, Canadian, and Russian factions are included, plus a number of community assisted factions are currently in the works.

mikeros says:
"The BF2 engine on its edge... the BF2 gameplay reformed and finally promotes real teamwork. If you search for challenges in tactics and adrenaline boosted firefights this is the FPS game you search.
For me it worths to buy BF2 (if you haven't yet) just to experience this mod. Read More..." 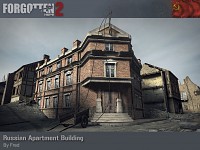 ADTeam™ says:
"Historically correct, crude and with lots of violence, completely realistic, action in the most pure level, what else can be said about it? one of the most biggest, and in my opinion, greatest modifications ever done for BF2, brings us the real feeling of the WW2 and makes us feel like if we are there. Epic." Read More... 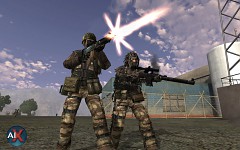 The most feature rich single player experience there is for BF2. Building upon the great Allied Intent Mod, AIX aims to deliver an amazing array of content which is 100% bot compatible for use in single player and coop gamemodes.

CnC_Fin says:
"Allied Intent Xtended has probably the best singleplayer experience of all Battlefield 2 mods.
In AIX, there are four armies to fight with: USMC, PLA, MEC and UN. Each army has completely new kits Read More..." 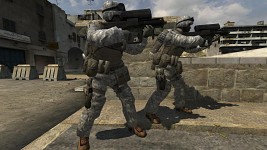 A modification which goals are to bring back all the features that were left out in the retail game. The gameplay style of the mod is a mixture of arcade and realism and features shown on the first trailers and screenshots of Battlefield 2.

Theta.Sigma says:
"This mod is a perfect little thing - it changes the game so that it is far more playable and enjoyable than vanilla BF2.
Proper damage and accuracy in this mod are nicely balanced so that you actually can kill things if you aim Read More..."


Keep voting and reviewing your favorite mods and until next time, keep changing the game!

Best mods in one article :3

Hopefully this bundle will change that

I agree. AP is probably the best BF2 mod I've ever played. The sheer quality that's being poured in is already why I love it so much

I totally agree with your opinion! I can't even imagine what can we find upon the mod's real release! I mean, it's the only mod still incomplete here, v1.0 will still need months or years even until it's available to the public..

Nice article but I've already got all these mods. This was on the startpage so I'm sure many new users will try and love them! :D

Cool, thanks for this

The ModDB ranking system is not representative at all its more a joke.
Compairing a PR with 95% and a Allied Intent Xtended or Alpha Project with the same %. Come on guys :D
Every guy gives every mod the same epic super points lower then 8 what a lot of mods compared to others are dont get used. I did it and got directly flaimed. To get an 9/10 it must be extraordinary good. And sorry 95% for a Allied Intent Xtended or Alpha Project. OMG :D
This bothe are not more than a 6/10

ROFL you're full of **** dude, realism is nothing compared to skill action mods, mods in general for this game are badly coded, that doesn't stop us from playing it, moving on, AIX and Alpha project are action mods which has changed more gameplay from vanilla then the random streams of mods seen here dude, and DON'T deserve anything less than an 9, its clear you know nothing of hard work and real skill to total conversion mods, PR is **** code with constant issues, still it deserves the score it gets, **** comments like yours are the biggest joke I've seen yet because mods like these are why BF2 are even playable, and why BF3/4 are a HUGE joke and pretty much put to shame, you know NOTHING about "good" or the gameplay provided and why we REAL people who love classic battlefield, love the mods portrayed here, STOP talking dude, you have NO room to even breath here

If your comment would not be so stupid, what makes me sad, i could laugh about it. :D
So i can only give you a :)

The best mods for one of the best fps games ever! :D

These mods are the best mods for BF2! I have all of them, and i hope this increases the popularity of these mods and Battlefield 2! :D

All bf2 mods were always so similar to the original game.... Highlighting how samey everything had become with semirealistic shooters back in 2006 & 2007 when I first tried all these bf2 mods. Honestly, I like to see new ideas from mods not an endless stream of maps and reskins all with the same functionality.

Its clear you know nothing about total conversion, PR plays NOTHING like BF2, its more tactical and requires REAL skill and teamwork to play, also this engine is VERY limited, its NOT like source where we can literally change the game, still that's what MODS ARE, "NEW skins and models, and of course maps, you have NO idea AT ALL how ****** "new ideas" are dude

this makes me long for the time when I had every custom map ever made/ported for AIX2. many of them seem to be gone from the internet now :(

you missed lions roar and tactical war. you can pilot a freaking aircraft carrier,a battleship, and a ton of other stuff that makes bf4s naval strike look like a beach party.

Agreed. Controlling naval systems along side air and land assets brings together the full wrath of modern military aggression. Its like getting change for a $5 bill and finding out they gave you a $20 by mistake.