Third person horror adventure designed for Half-Life 2. No weapons, no fighting. Only means of survival is to run or sneak past the monsters.

Im uploading a patch and a new installer today, but anybody who crashes in the laboratory ending with the barrel, for now do this:

"use" the barrel while you are IN monstervision.

Deeply sorry about that, I thought I got rid of that bug, but now I´ve made some major changes to the logic there so it works for granted... Sigh, what a letdown. The part after the rooftop is pretty wicked, my fave, so its worth a check. Edit: Here´s the patch.

We made it, whoo!! Click HERE for the installer, or go to downloads. I´ll update this news post along the day when there are more download mirrors and such available.


Older Computers:
Also, I´ll release an "old computer" patch later on today, and update this newspost. Its so that the excessive use of particles doesnt kill a few older computers. So yeah, keep checking here. Edit: Added the older computers-patch

"Framerates are low" fix for older computers from ModDB


Other ramblings:
There´s ALOT of stuff going on behind Flesh right now, so this will definately keep me busy for a few days... expect more updates and rants here in the mod profile, as well as some other websites. Also, later on, I´ll make an version 2.0 where I take hearing impaired in notice (subtitles, more visual clues) Sorry for not being able to get that stuff in this initial release. But yes, there´s some cool stuff coming in a few days (or a week). 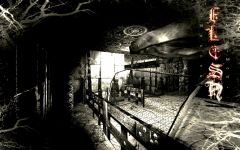 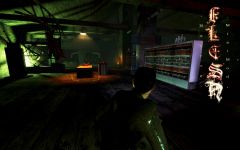 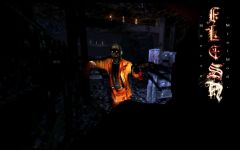 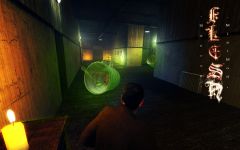 Oh and dont forget to vote on Flesh in MOTY competition this year. I promise CHANGE!!
So yea, while it download, or after you´ve tested it, I hope you´ll scroll a bit upwards and click the "vote" button somewhere above this article. Thank you in advance.

Enjoy the holidays, have alot of presents, good food, and fun with this mod!
-Henri

Very cool mod with many unique visuals and game mechanics, but i miss the weapons. ~.~

Thanks for you kind words about the music, arv.

Congrats for the release Henri. It's amazing how that original prototype turned into a full-fledged sp mod with so much quality in every aspect. My participation was merely testimonial, just I'm proud anyway of what you and the rest of the team did here ;)

I'm really looking forward to this, going to download as soon as I get home!

This is a pretty scary mod. Great job.

Got to say very well done. Congrats to you guys for making a great mod. Not my type of mod, but eh, I'll give it a try.

Finally! and i gonna vote for flesh :3

I would have to say, it looks terrifying and awesome at the same time.

Registered to just post this. Graphics are messed up on my computer.
It's all fuzzy and weird and the skybox is filled with black moving lines.
Example:

I´ll try to find out what the hell that is, never seen such before.

My lucky guess is, go to the options and set the shadow quality to maximium, and preferably the shader quality to something good as well.

Changing the settings didn't do a thing, maybe it's my graphics card that is acting up (MSI GeForce 7600 GT), yet I myself haven't seen anything like this before in a source game.

I have a 7900 and it is displaying the same weird graphical effects for me.

Are you guys using directx 9 to play it?

Oh wow, didn't even know that you were a finn.

I'm having the same problem, using a GeForce 7600 as well. The -dxlevel 81 launch option seemed to work but makes it look quite a bit different from the screenshots, so I'd love to try and get this sorted out.

Another weird problem I had was that after removing the -dxlevel 81 setting from the launch options, it still had my hardware dxlevel set to 8.1 in the graphics options in-game, and when playing the mod every shader (bugged or not) is gone. I guess I could try and re-install to fix this.

It would be nice if it had less glass walls. That's a bit of a taboo. If my character looks like he can safely jump over a small wall then he should be able to. The small house area drives me nuts for that since I could just get past these jerks and go up there. Also it would be nice to use sneak abilities such as whistling and throwing rocks to make noises when I need them to move some place like I'd want to do in real life to get someone to investigate.

Thanks for the in-depth feedback! Im afraid with my time and skills, I couldnt come up with anything better. But maybe next time. =D

Good job on this mod, I really like the atmosphere; both visuals and sound effects.
The only small drawbacks imho are the controls and your character animations. I think it wasn't a good decision to scratch strafing out for the usual pc controls, it seems a bit odd, though you can get used to it of course.
And your custom movement animations create an humorous impression sometimes, because the models are 'ice skating' all the time.
But these things are only small fish in a big pond, it's a great mod overall.

Thanks. I smirk at the animations myself as well, and I´ve animated most of them. =)

The strafing has a reason. I wanted to restrict the player so that he really is more helpless against the monsters (which are quite stupid)

Thanks :) We worked extra hard on sound, and atmosphere.

Nothing better than some christmas horror, gonna check it out tomorrow for sure^^

Well this looks worth a try!

Ok it crashed at the end when I pressed the barrel.

So far the mod has been lovely, great and creepy atmosphere, gorgeous visuals, fitting music.

I chose the next chapter in the new game menu, I don't think I missed too much but probably some stuff, (then again perhaps one of the most important part), but I was able to finish it.

This mod was wonderful the whole way through, very different, unique and had its scary bits. :)

I know this line perhaps is a bit cheesy but: Thanks for the early Christmas present Henri, I definitely enjoyed it!

Yeah First Off Great Job on the mod Lovin it so far!!!

But I Got a question:

Are The Notes Suppose to be blurry? I mean Some of them I can read others I can't T_T

Installer didn't work for me :( It said Integrity check has failed.

Thanks for the gift, Henri. ;)

The clock in the manor cannot be interacted with. The character rotates instead of the hands. :0

So far it's been very interesting. The one gripe I have is that you can't touch any of the ghouls or else it's game over. Some type of health system would have been nice; you know, give the player something to worry about. That's just my opinion. I'd keep playing but since the clock doesn't work right, I can't continue. :(

Anyway, I just thought I would inform you, in case no one else has.

Press and hold mouse1 or 2 to rotate the hands.

This mod looks interesting, so I installed it, started the game, and got to the point where the sneaking mechanic is introduced. Being someone who learns by doing, I decided to see what happens if you don't sneak. I crept towards an unsuspecting ghoul, then popped up and shined my flashlight right at him.

Absolutely no change from what it had been doing previously (standing in one spot and looking menacing). I ran right into it, ran around it. Crouched, un-crouched. Backed away, ran closer. No response.

While this makes for a significantly easier game, it doesn't make for a particularly fun game. Any idea as to what's causing this?

some of the monsters are bugged and will occasionally stand still. However, most that you will encounter will chase you if you don't sneak.

Im uploading a patch and a new installer today, but anybody who crashes in the laboratory ending with the barrel, for now do this:

"use" the barrel while you are IN monstervision.

Deeply sorry about that, I thought I got rid of that bug, but now I´ve made some major changes to the logic there so it works for granted... Sigh, what a letdown. The part after the rooftop is pretty wicked. =)

Thanks for the speedy patch!

Just finished it, Absolutely Loved it >.<

If you had blunt weapons which you could use to simply push one horror creature out of the way, you could 'up' the difficult curve. :>

These weapons would still be difficult to get and possibly have a chance of breaking which always adds a nice "OH ****" factor.

Congrats on the release! Gonna pimp this for ya over on the SG website. :)