A few serious issues surfaced for Source engine mods, grab this update! Do you want to see our next map? Interested in coding bots? This may help you.

Hey, we don't update too frequently but the project is still alive. I want to share with you a few important news. First of all, a much needed update after the SDK was... 'left for dead'? As you know, Steam's master was updated in a way that conflicts with Source mods, so most of our servers cannot be seen at all. The HL2 process may not even close when you exit the mod, very annoying. The 3.7d patch should fix these issues, it's meant for both clients and dedicated servers:

And what about a new map? Leon Kilean, known by Flesh, Water and other great mods, is the author of this cold and beautiful level. Snow and ice, not a usual map in our mod, isn't it? Gameplay wise, it's based on the same formula than our fof_eliminator (push the cart). 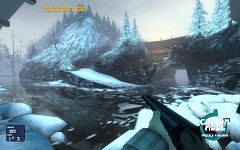 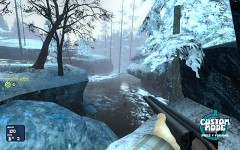 And finally, I'd like to share with you some of my work. I'm not a great coder but finding resources about bot coding in Source engine is a real pain so I decided to clean and comment most the code used in our MP AI. Focus is navigation because the combat features are quite glued to FoF's gameplay. The code comes in a clean and functional solution (MP branch, should be portable easily). Download it here, watch it in action.

Whoever did that map is very handsome and such a genius

Are you guys on steam now ,with the added dl support for it ??

Wild west winter map? As a finn, I approve this message :3

Hey developers. My mod is also having a problem with listing the servers on the Steam master list. How exactly did they change the master list? And what did you have to do to fix it?