Fall of Romania is a alt-history mod set between 2018-2020s where Romania is locked in a civil war between 3 factions, each is based on historical parties/governments of its past fighting to place their ideology on top of the others. Below are the 3 factions lore.

Want to join us on discord, join here! - Discord.gg

New Dacia:
After the initial rebellion in Bucharest from multiple factions spurred by the communist Union’s aggressions in Moldova; the remaining fragments of the government fled to Dacia under the leadership of ex-Romanian President Klaus Iohannis. The new government pleaded their cause to the UN and NATO to send troops immediately and help re-establish the government; but due to high-tensions world superpowers ignored Romania’s struggle. Forced short of their hand, the New Dacians turned to means of appeasing the public eye and quickly rushed to locate heirs of Michael the 1st to create a constitutional monarchy and democratic parliament. With an Heir found, many Romanian people rallied behind the government of New Dacia hoping that one day they can retake their homes and live in a prosperous land with a leader they can look to as a shining example of Romanian pride and democracy. As of May 6th, 2019, the government of New Dacia has finally been given material aid and volunteer forces from NATO, which has given them a fighting chance to regain power in the country. Unfortunately for this new edge, the president and his succession were kidnapped from Iohannis’ mountain estate by Iron Guard nationalist and was executed on live television. The uproar echoed throughout supporters of New Dacia, who had never considered the Iron guard to be an enemy to them. Now the New Dacians hold a two-front war with both the Union and the 2nd Iron Guardsmen. They are receiving material support from most of NATO, including the lateterm US president Donald Trump and Angela Merkel. Many of the people hope the war comes to a close soon, but know it will last longer than their lifetimes. Despite the heartbreak of their history, they New Dacians fight strong and remain vigilant.

2nd Iron guardsmen republic of St. Michael:
As racial tensions built up in the civil war with many immigrants fleeing Romania to be denied leave and the combination of Syrian immigrant flows from 2015 and the communist support in Moldova; Crin Antonescu left to Predappio with other Nationalist parties from Romania. Upon Mussolini’s grave site, Crin and his fellow nationalist declared they would not rest until Romania was set free from the democratic and Communist ‘disease’ that was sweeping their great lands away. Fascist and national Socialist movements which had been to Predappio that day returned to their homelands and spread the word for a call to arms, within a week over 200, 000 men joined the cause. Realizing the powerhouse available to him, on October 18th Crin announced in the small Italian villa that the 2nd Iron guardsmen republic of St. Michael would march to Romania to restore order. Fascist parties in Italy and France armed themselves and marched with the outcasted Romanian politician to Transylvania; along with material support of bordering Christian brothers Serbia and Hungary. Initially the iron Guardsmen were a militia faction picking off the odd wanderer who took a wrong turn, but after Pope Francis resigned and Pope Pius the 13th seized power; he saw a hidden gem in the movement. He saw his new selection of Crusaders to unleash a purge of heresy in the Romanian lands and therefore gaining an invaluable ally. Crin met with Pius late March, where the Pope appeased Crin to accept the Vatican’s armouries from WW2 and their unimaginable wealth stashed from centuries ago. Crin obviously took up the Pope’s offer, but in private; in return, if the Iron guard were to win the war they would act as the enforcers of Christianity in the Balkans. On March 6th, the Iron guard stormed the mountain top estate of the new Dacian presidency, killing off a majority of the line of succession and officially executing the president on live television, thus proclaiming their state and cause. Contrary to the world governments beliefs; many people left for Romania to join their cause, from Russia and America to Belgium and Switzerland. The Pope, realizing he could influence the very outcome of the war, began fondling in Italian politics. After the Novochok attack in Napocca, The Pope felt the use of Chemical weapons would discourage and defeat his crusaders; thus, he swindled the Italian army into ‘donating’ it’s mustard gas stockpiles from WW2 to the Iron guard. Crin graciously accepted and renamed the chemicals to “Ion’s wrath” and “St. Michael’s cure”. Since then the Iron Guard is a feared group and quite possibly the most numerous and brutal of the factions.

Socialist Union of Romania:
Taking upon the name of their predecessor’s; the Union seeks to establish a pro- Russian regime of communist over Romania. Created by tensions from the Novorossiyan government which now governs Ukraine- the Union rapidly grew in Moldova under the leadership of Constantin Ratoru. The Union was not formed until Ratoru unified other pro-left factions to the cause, in which the name is given. In August, Ratoru met with Vladimir Putin and Oleg Tsaryov to discuss the ‘future’ of Romania’s dwelling insecurites. Putin, not wholly impressed with the end goals of the party declined to aid their cause directly, whereas Tsaryov realized the potential of taking out a competitor in Ukraine and gaining friends after their hostile Ukrainian takeover. In October, the Union began eliminating key figures in Ukrainian politics, then picking off small town folk who defied them. The Romanian government gave an ultimatum for the Union to appear before the parliament to rectify an end to the small street violence, but the Union declined.
The Union mounted their troops and marched out of Moldova, killing 45 soldiers at a tavern in Napocca. The government, fearing a civil war sat back, the people rallied in the streets demanding government response to the invasion, but nothing came still. The Union pushed farther inland, pushing other factions towards Bucharest, eventually causing the Government to collapse into a state of anarchy and an all out civil war. Tsaryov, fearful the creature he designed would turn to destroy him after they had finished the Romanian line of succession; staged a coup in the Union and oversaw the old guard, including Ratoru be escorted to Novorossiya where they were quickly liquidated. This gave the Romanian government time to escape and found New Dacia. After this, Tsaryov appointed lesser known Romanian socialist Mircea Geoana to lead the Union. Unknown to him, Geoana turned out to be the puppet Tsaryov desired.
After December of 2018, Tsaryov received Novochok chemical agents from Russia to strengthen their forces if need be. Deceitfully they were handed down to the Union; who proceeded to drop it in the heart of wartorn Napocca in May, 2019, killing over 12,000 people10,000 were civilian deaths. The death of new Dacian presidential lines of succession on May 6th discouraged many of the Union rebels, as their intent was to never sew such destruction; but the line was crossed by the iron guard and now there was no going back to the ways of old- now it was full out war. In a desperate attempt to gain support for the hectic war, and full well knowing that Tsaryov was manipulative in his ways; Geoana flew to China where the Chinese began a lend lease and guaranteed the Union’s sovereignty from Novorossiya. The Chinese and Belorussians eventually agreed to the Tighina trade accord, where the two nations would donate their excess weapons and materials to keep the Union alive to one day create their own secure state.

Hello all, welcome to developer blog number 2, today we will be presenting our current work on the mod with the inclusion of new vehicles, map assets and units. Here we see one of the new, truck vehicles in a union outpost; 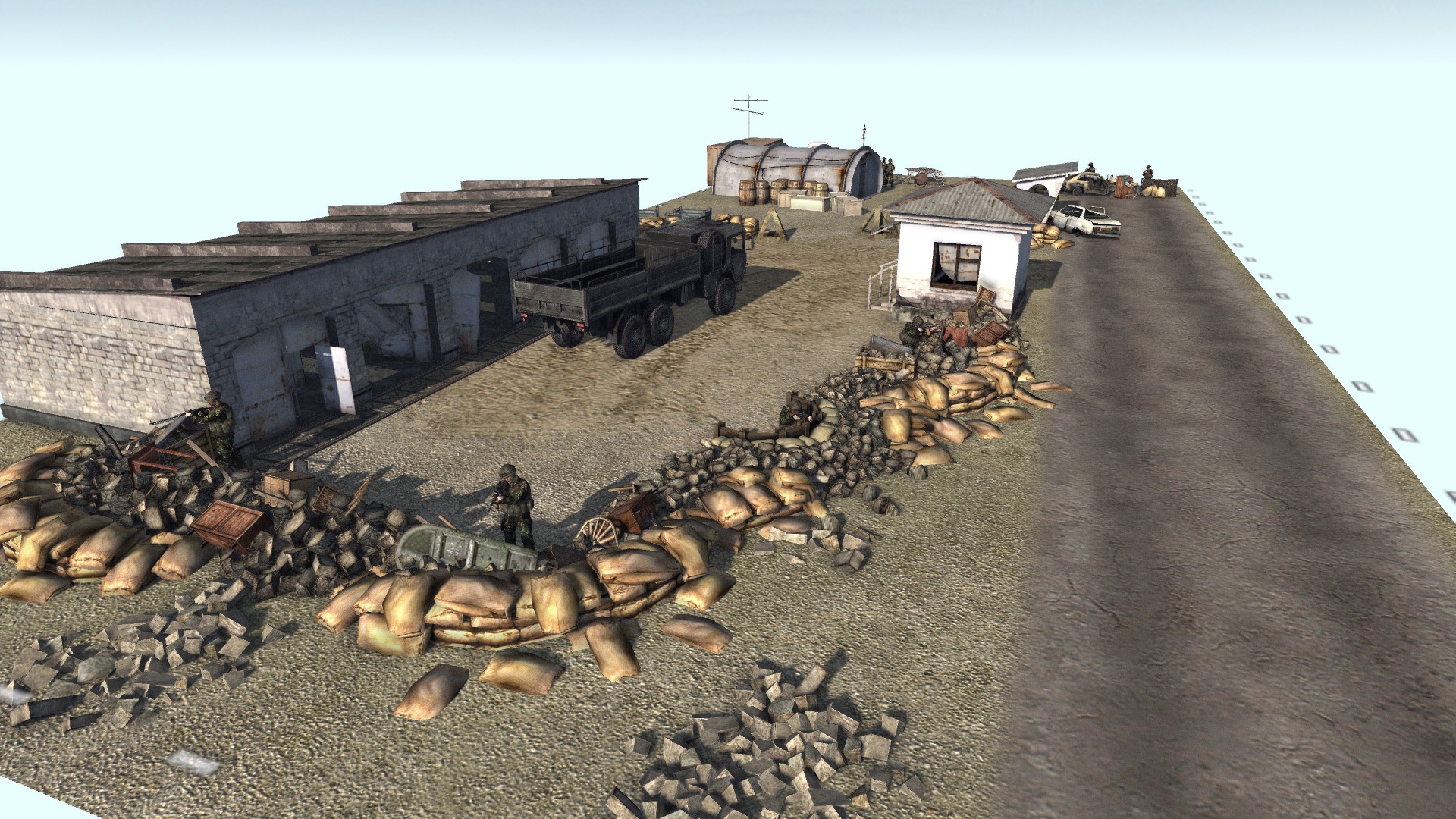 And here we see more the new assets added to the mod as of recently; 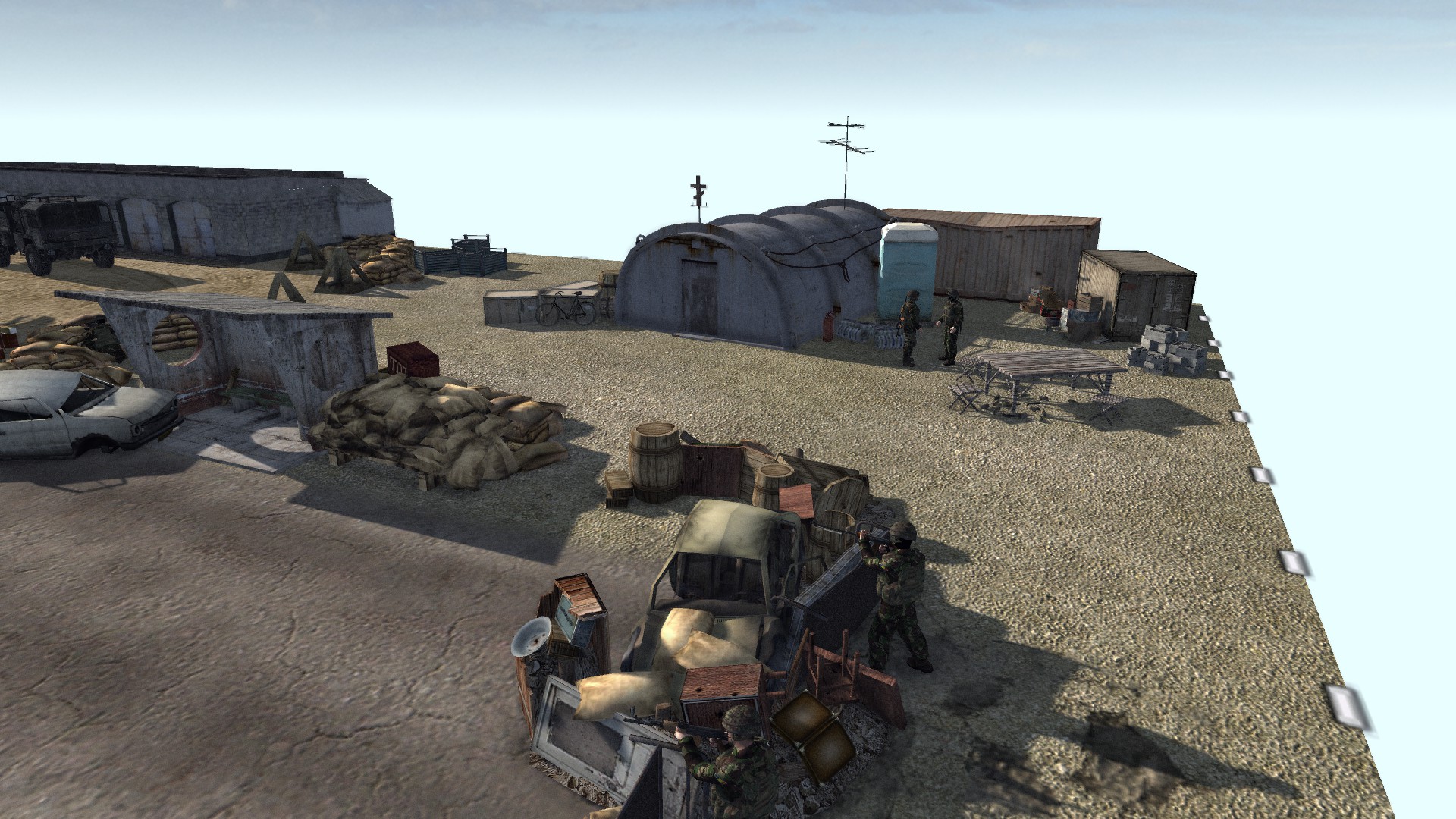 In this Developer blog, we will be showcasing the new custom textures and decals on helmets for the Garda de Fier Faction.

Will there be TR125 tanks and MLI-84 armored vehicles?

dont worry mods coming out soon
at least the base version

Its coming along very slowly, few people work on this mod and most of us are always busy working on other mods, it is also exam season so we don't have a lot of time to generally work on modding.

hello, i'm the head dev Red and creator of the mod with my great team and contributors, we are a small team but this mod will have the initial release somewhere the year with updates coming each month after then depending on what we want in, hope you enjoy