Regarding the recent events...

As some of you have spotted, the download link for Evolution of Combat IV has been removed from our ModDB page this week. There's a long backstory behind this and I think that it helps if I start at the beginning to help you understand everything that's gone on.

Evolution of Combat has been in development since around 2007, originally under the name of "Combat Evolved" it has seen many different developers over its life but one developer has always remained the same, Serenity.

After releasing the hugely successful Evolution of Combat III, he began work on his own to create Evolution of Combat IV. A year or two later, the project was nearing completion and he got in contact with me, MattFiler, and asked I would help manage the ModDB page and publicise the mod.

We decided to take the mod public in August of 2015. There was a large amount of support for the project and as a result I created weekly news posts leading up to release along with teaser videos to show off the contents of the mod. During this time I worked on developing the menus and launcher as well as the publicity side of things, while Serenity worked on finishing the actual mod itself. 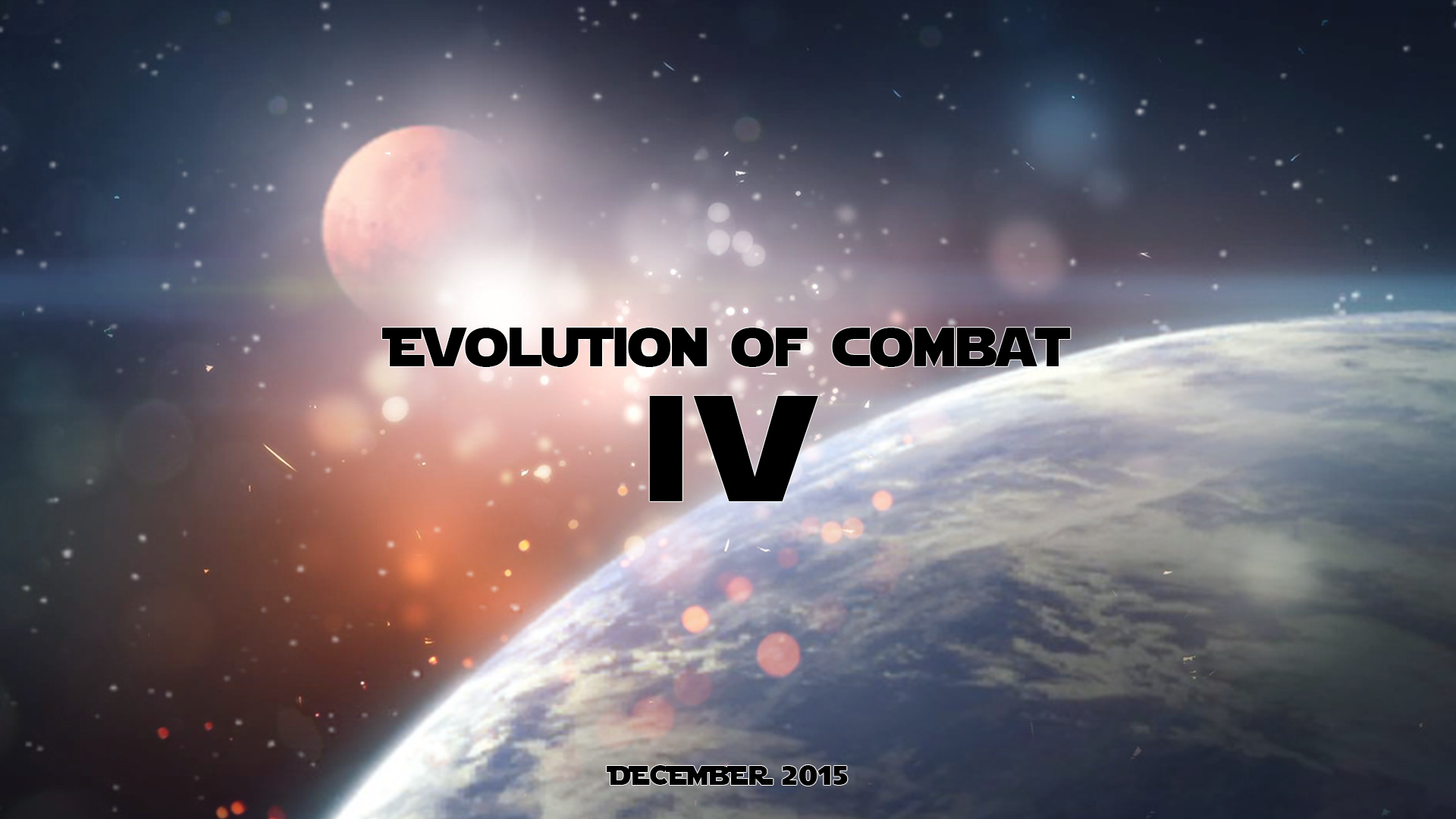 ^ The first promo image I created for Serenity back in August before I decided on the current style!

Just before release (in early December 2015) there was very bad weather here in the UK and as a result Serenity was flooded. He lost a lot in the flood including his computer which contained the source code for EoCIV. We thought this would be the end of the project, but luckily he discovered an older backup of his code online and worked hard on that to bring it back up to scratch ready to release.

Soon after the launch of EoCIV there were numerous claims of copyright against the mod. Some of them I was aware of, like the KOTF character selection menus which were used as placeholders until we finished our own menus, however some of the claims were pretty large. I spoke to Serenity multiple times about the issues and he assured me that the mod was clean and that other than the KOTF menus which we planned to replace there was no copyrighted content.

Just recently, claims of copyright have been getting a lot worse and as a result Serenity has decided to leave the project. He has told me that he is retiring from modding and does not plan to create any new projects in the future. I was sent one final EoCIV update about a month ago and that was it.

Happy at the news, I decided to release the final update I was sent in the form of "Patch #2" and continue like nothing had happened. However after releasing patch 2, the mod page was taken down and I received messages from a couple of ModDB admins questioning me about the stolen content that people had spoken about. Since I do not have access to the source as of yet I can not confirm if there is actually stolen content within the mod, however the claims are very detailed in some parts so I decided to believe them and I agreed with the ModDB staff to take down the download for EoCIV until I can confirm that there is no copyrighted content in the project.

So that's everything up to now, but where does that leave the future of the mod?

Once Serenity has sent me the source code for the mod I will work my way through the project to remove any copyrighted content that I have been notified of, then EoCIV will be re-released here on ModDB. After re-release I plan to continue developing the mod creating regular game updates through the year.

It's not been an easy ride over the last few months, and I appreciate the community's support. We never meant to cause any trouble, and I would have pulled the mod a long time ago if I'd realised that the claims of copyright were genuine.

I hope you can understand the situation and will stick with me while we get the source code transferred and I work to fix up the mod ready for re-release! I hope that the download will be back on ModDB around July/August, but that's just a rough estimate for now.

Until closer to re-release I will not be very active on the ModDB page or on the Discord chat, but I will try and make an effort to play more often with everyone and I plan on posting video updates of my progress over on my personal YouTube channel while I work on the mod, so subscribe to catch anything I upload!

I'd like to highlight that this isn't the end of the mod, hopefully this is just the beginning. I have some interesting ideas for new features once I get my hands on the source code which I'll be showing off in videos on my YouTube channel (subscribe button above).

Thanks again for all the support, and I look forward to what the future has in store!

Patch #2 for Evolution of Combat IV is now available! Here is everything you need to know.

Today we launched update V2.2 fixing some reported bugs and adding a couple of new features to Evolution of Combat IV.

Today we've launched v2.1 of EoCIV to fix some issues spotted since the launch of patch #1.

Patch #1 for Evolution of Combat IV is finally here! Here is everything you need to know.

It's been 3 years, and there's no update on the controversy.

how do i downlaod the mod it says its been deleted

is this mod still being worked on?

I recently installed this mod, and have some really weird bugs, for example Rosh turn hostile in Jedi Academy first mission, when you need to cut second tree, after he jumps across water, and blaster rifle has invisible projectiles, when you fire, they make damage, but they invisible and don't have impact effects.

How do I aquire new force powers as well as upgrade existing ones in the singleplayer Jedi Academy campaign?

this mod is broken, from the 1st mission where u have to cut down the tree rosh doen't move, so I move on to the cutscene then the red style hads a constant saber swing sound going when the saber is at idle, then, roch turns on you and it says you have turned on your friends, wtf?

The mod works "Perfectly for me" at least in the 1st mission where u have to cut down the tree... You can find more bugs later tho XD

The Stail Of Play Was Changed To Be More Dificult, But More Real.