- RUN THE MOD WITH THE SHORTCUT OR THE EoF.vbs if you are using non-steam!

- IF YOU HAVE STEAM, DOWNLOAD Steam solution READ AND FOLLOW THE STEPS IN THE readme!
INSTALL it to \Steam\steamapps\common\Medieval II Total War!

- IF YOU HAVE WINDOWS 10, set medieval2.exe to windows 8 compatibility mode!

Europe is burning and you will feel its heat!

Using my own, other modder's and the kingdoms' features

Most of the new factions are unplayable, the unplayables are 'semi-factions', boasting less units then the normal factions.

The game starts in 1091. It is four turns per year now, meaning you will get to keep your characters much longer. Every historical event will occur four times later in game. The family members and rulers are historically corrected (except cases where the game's limits did not allow it) and the factions got a detailed, expanded family tree with three generations at most cases. The campaign now has seasons, a summer (and spring) and winter (and autumn). Currently there is no special penalty attached to winter, only that you might have to fight in snow. It is also possible to experience mild winters. I've also added and corrected names.

Most nations are neutral at start, but there are wars going on between the Holy Roman Empire and France, Spain and the Moors, Portugal and the Moors. (It's the time of the reconquista, Spain has El Cid!) The number of rebel regions have been drastically reduced, forcing the player to wage war against others very early.

It is unbalanced, there are faction way harder to play then the others.

) has been added to the game. Lithuania follows paganism (

), they have priests now.

Normandy, Lithuania, Novgorod and Georgia pays a random tribute to their overlords every turn as long as they stay allied. Normandy is the fief of the french king but of norman background and they can easily decide to support England instead of France. Lithuania and Novgorod is the taxpayer of Kievan Rus'. Georgia is a country annexed by the Turks, but under King David they are likely to wage a war of independence against their overlords. The Turks currently own Tbilisi.

Across the map you'll find independent merchants, who are not aligned to any faction and are easy pray for your state-backed traders. They are a good way to increase your merchant's skills.

Islamic factions can have princesses now, they are able to marry just like the christian factions. You can have inter-religion marriages too! 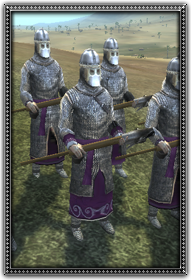 As Byzantium, you can buy the deadly firethrowers in Constantinople. Use the kingdoms' coolest unit in the base campaign!

With the diplomacy script, carrying out hostile agent actions against your allies will be risky, they will most likely break the alliance if you do so!

The mod includes a number of smaller grapical mods made and published by others and me:

I used Africa Walkable - by Evil Dane, now you can move your armies in the desert. I also added parts of New Models for Campaign Map Captains - by =NF= Vasileios the2nd and made own textures too. I've added 34 new regions and renamed a lot, mostly using the owner faction's language.

I've released 1.3. Until now, I did not really care about my 'marketing', but I intend to create new screenshots and videos of the mod. If you want to, feel free to create anything.

Now you can play Novgorod, the gem of the north. It will be interesting, for you are a vassal of Kiev and you are pretty much cordoned off from every opportunity of land expansion expect of the lands of the Finnish tribes.

Georgia is also playable now. I think that can be quite challenging too. How will you defeat the Turks? I would suggest expanding quickly northward before Kiev takes the region, so you can get the Kipchaks and more towns to have a chance against whichever empire you will fight first.

Please note there are known issues with 1.3, but they only affect main menu and not game breaking. Thanks!

The list of the new regions in Europe on Flames, by factions.

Download this one. If you have any older version, you can still install this! It requires Medieval II Total War 1.03! Part 3 of 3 RUN THE MOD WITH THE...

Download this one. If you have any older version, you can still install this! It requires Medieval II Total War 1.03! Part 2 of 3 RUN THE MOD WITH THE...

Download this one. If you have any older version, you can still install this! It requires Medieval II Total War 1.03! Part 1 of 3 RUN THE MOD WITH THE...

I play M2TW thru a Steam set up. Followed all the instructions you give in "STEAM Solution" for installing this MOD, and my first try of the game afterwards was successful.

I'll play Venice (reading now Roger Crowley books) and will post again after 50 turns or so. My previous try was under SS 6.4 - Late Era Campaign - and the first CTD came on as early as turn 31. At the time my install of M2TW was a stand alone set up. I decided then to get rid of it, go to Steam, and buy their online version (Definitive Edition), and then try a MOD, other than SS 6.X, so here we are.

How do you uninstall it?

Hi i just start a campaign with georgia,but they have no infantry other than peasant, is it a bug?

everytime I try to play the mod it won't work. Is there a way to fix this issue?

Hey I'v noticed a few funny things about this, not game breaking but a little buggy. when playing as the normans both the merchant and the diplomat are England's not yours I don't know if that's on purpose or not though. secondly the norman cardinal is a bishop and isnt shown in the cardinal seats even though the rest are referred to as bishops. minus these small niggles this is very fun mod that this old rust bucket of a game needed great work.

I wish there was a way they could add all factions to play. as in Wales.Ireland, etc etc etc. even with desr start doesnt work it will just crash it.

Calling it quits, its not worth it, advise for the future, t get more fans into this, i would make it easier to play . no one wants to spend hours trying to zig zag to play a old game.

Update - I had to get a rar opener on Window 10 store, and un load it to a new folder. so now all 3 have an application now, now that i did what i did.