Today we would like to relase a new screenshot from a colder region of Enderal, together with a book!

Fitting the current time of the year, we'd like to show you a new screenshot of Enderal's north - The Northwind-mountains. Secondly, we have decided to release the first chapter of an ingame-book called "The Butcher of Ark". It's the autobiography of a notorious serial killer, who died half a century before the happenings of Enderals story - It will introduce you to the lore of Enderal and give you a sense of the overall feeling of Enderals themes. Attentive readers might also spot some interesting connections to the mainquest! Hopefully it will be a good read for everyone enjoying dark, mature fantasy.

Finally, we'd like to tackle a topic which has been on our mind lately. A lot of users have suggested for us to use ENBs in our screenshots. However, we won't and never will. There are three reasons for this: First of all, it would falsify the end product. People whose machines aren't strong enough for the ENB would simply get something looking entirely different (and probably a lot worse). We want Enderal to look awesome on every machine, even on weak machines. Secondly, most ENB-programmers do not allow modders to include their ENB in the download. It would overcomplicate the installation progess. And finally, we consider it to be an easy solution to getting impressive results. Someone once said that a designers true skill shows when making something look great and immersive, even without dozens of graphical enhancements. We want our work to be genuine, and we want it to amaze you due to the hard labor and - at the risk of sounding cheesy - passion we put into it. Of course, people are free to use whatever ENB they like and installing it themselves, thus enhancing their experience even more - We simply don't want to make it obligatory.

That being sad, we hope you enjoy these new insights into the world of Enderal! :)


"As requested, I have brought you Jaél Tannerson's biography. The Steelcrabs surely did their best to keep it locked away from the public eye... Suppose they'd rather live in denial than face the fact that one of their own was behind those gruesome, pattern-less killings. Typical, isn't it? Anyway, I expect my payment of one thousand pennies to be in vault 1012 by next week. I will hear from you."

"The Butcher of Ark - Chapter One" - English


"The Northwind Mountains are a region situated in the far north of Enderal. Though being inhospitable due to their extreme cold and perilous fauna - Lost Ones, Frost Myrads and Glacier elementals, only to mention a few -, they used be well-travelled in the past. This fact was due to the Northwind-mines, where the valuable Northwind rocks were mined, which are rumored to be close to indestructible, thus making them a highly sought-after material for the construction of castles, treasure chambers and fortresses. After the closing of the mines, however, the region was left abandoned, leaving behind ghost villages and dangerous, semi-collapsed mineshafts, which still attract adventurers and treasure hunters. [...]
Lexil Merrum,
High Arcanist of the Holy Order 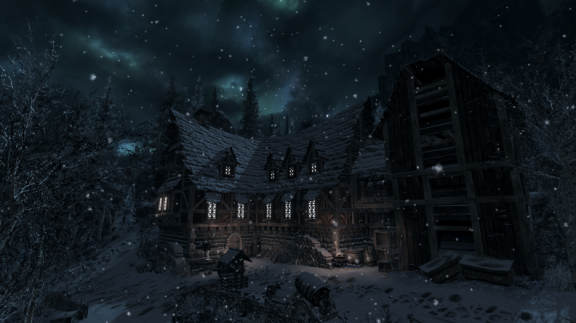