COMING BACK! New update coming soon, with new features as well as the latest CK2 map. With Umbra Spherae Reborn! So it will kinda look like Europa Universalis, only that you will have all the characters and cool stuff CK2 has.

Please support on Patreon or Buy Me a Coffe so that I can dedicate to this thoroughly and even gather a team of modders.

In the early 16th century many empires appeared in Eurasia. There was, of course, the concentration of territories through inheritance for Charles von Habsburg, in parallel with the Spanish and Portuguese maritime expansion. But in 1520 the Ottoman sultan Suleiman also rose to power, and would conquer Hungary and challenge Iberian rule over the Mediterranean and Indian Ocean. In Persia the Safavid Shah Ismail had forged an impressive empire, and to his East the Mughals were beginning to emerge as an empire.

The Holy Roman Empire was breaking up, but this eventually led to the rise of some German states, with or without the new Protestant religion. France was powerful enough so as to challenge the Habsburgs. England saw the reign of Henry VIII. Poland-Lithuania and Novgorod dominated extensive territories in Eastern Europe. The Songhay beat the last of the Mali Empire and took control of the important gold mines.

In conclusion, it is an interesting time for CK2 players.

I am moving the work I had onto the Umbra Spherae map. Here I leave a description of how it looks so far. Europe and the Mediterranean are already playable, only that it is all CK2-era, so there are no new early modern ere mechanics and flavour events. However, one new thing in that sense are new trade buildings and there is the protestant religion.

Others I have worked on haven't been included in this article, like the North African states (including the Barbarossa brothers in Algiers) and the Sahel kingdoms (Songhay, Mali, Jolof, Air), or like the Kalmar Union or Scotland. 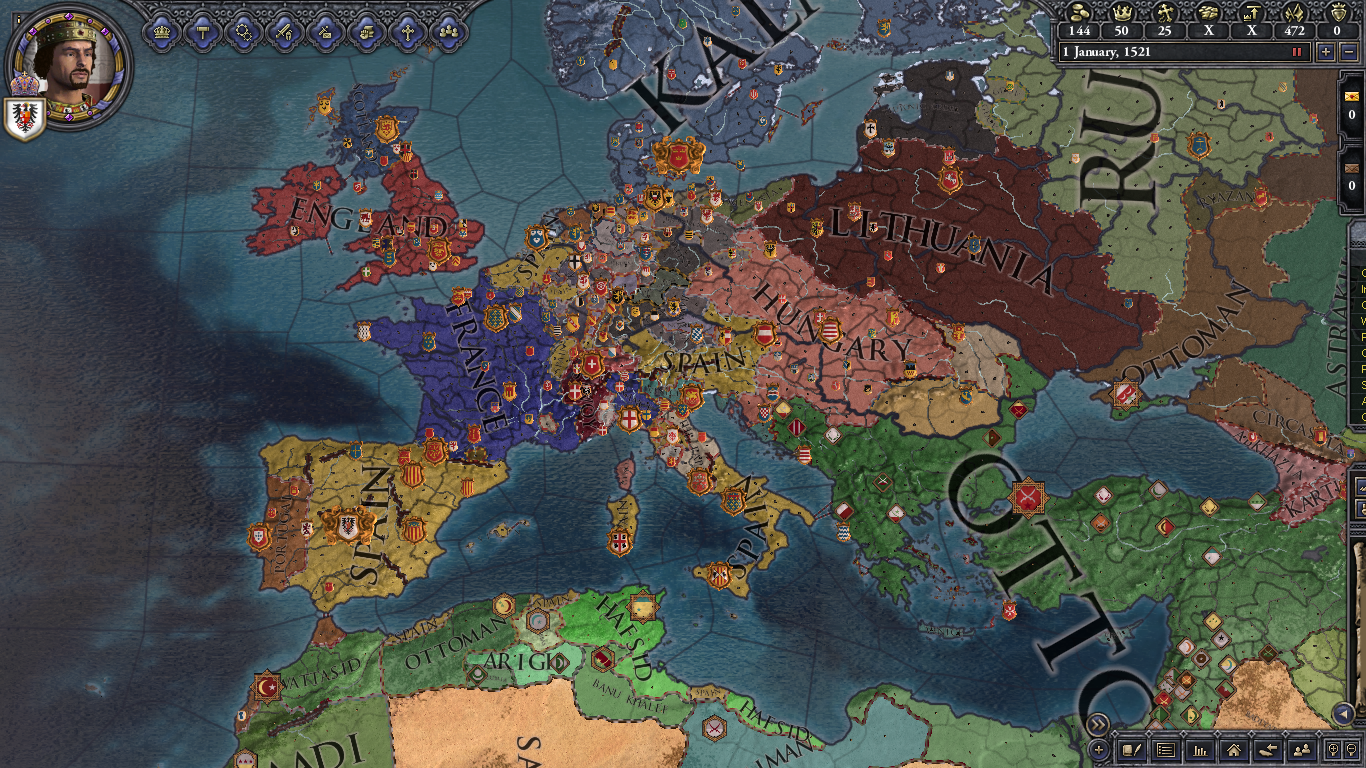 As you can see below, Portugal has a number of enclaves on strategic points in the trade routes from the East Indies. It also has control over ports along the African coast, from Cebta and Agadir in Morocco to Mozambique. In the future there will be mechanisms to deliberately block trade, as the Portuguese intended to do in order to divert routes.

The Ottomans and the Safavids are destined to clash over the Caucasus, Mesopotamia and the Arabian peninsula. A fractured Arabia (Medina, Al-Hasa, Al-Muraydis in Nejd and Hil, Nabhanids Oman) is taken advantage of by powerful empires around.

The first Mughal ruler, Babur, is threatened by his nemesis the Shaybanids in the North, the powerful Safavids in the West and the sultanates of Delhi (Lodi), Gujarat (Muzaffarid) and Sindh (Samma) in the South and East.

In East Africa there is a constant back-and-forth between Christian rulers (led by the old Solomonic dynasty in Ethiopia/Abyssinia) and the Muslims, like the Adal sultans in Afar and the newly converted Sultan of Sennar (Nubia). 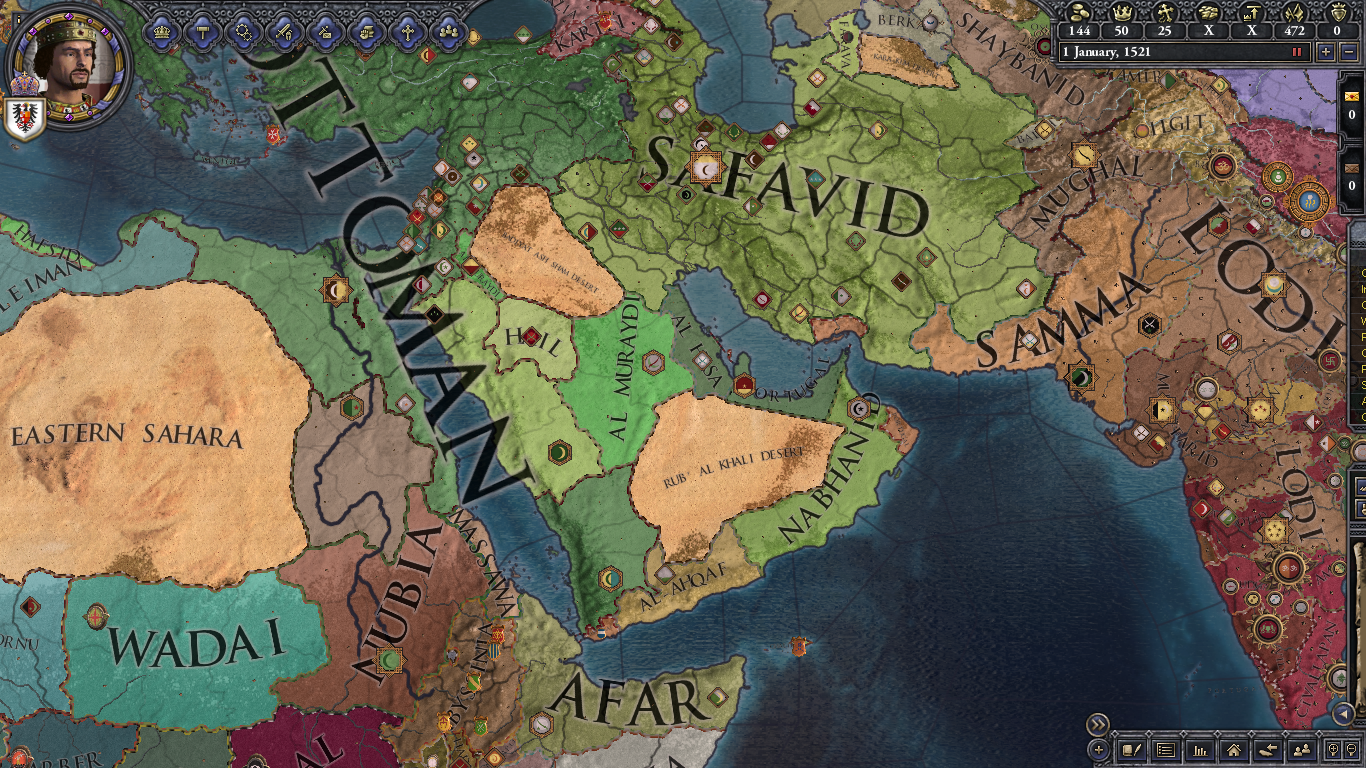 In the West of the Steppes, the Christian rulers have accumulated royal titles, with the Jagellions uniting Poland and Lithuania on one side and Hungary, Croatia and Bohemia on the other; the Russian Muscovites have also grown significantly in size. The Teutonic Order and the Principality of Ryazan are living their last days.

To their East, they have the successors to the Golden Horde: Kazan, Astrakhan, Nogai and Crimea. The last, on the coast of the Black Sea, has been forced to pay tribute to the Ottomans, as have Wallachia and Moldova. Though weaker than before, the Turks and Mongols who remain in the steppes will profit from raids, especially for slaves, against their surrounding realms. Sunni and Turkish rulers can now raid and sail through rivers. 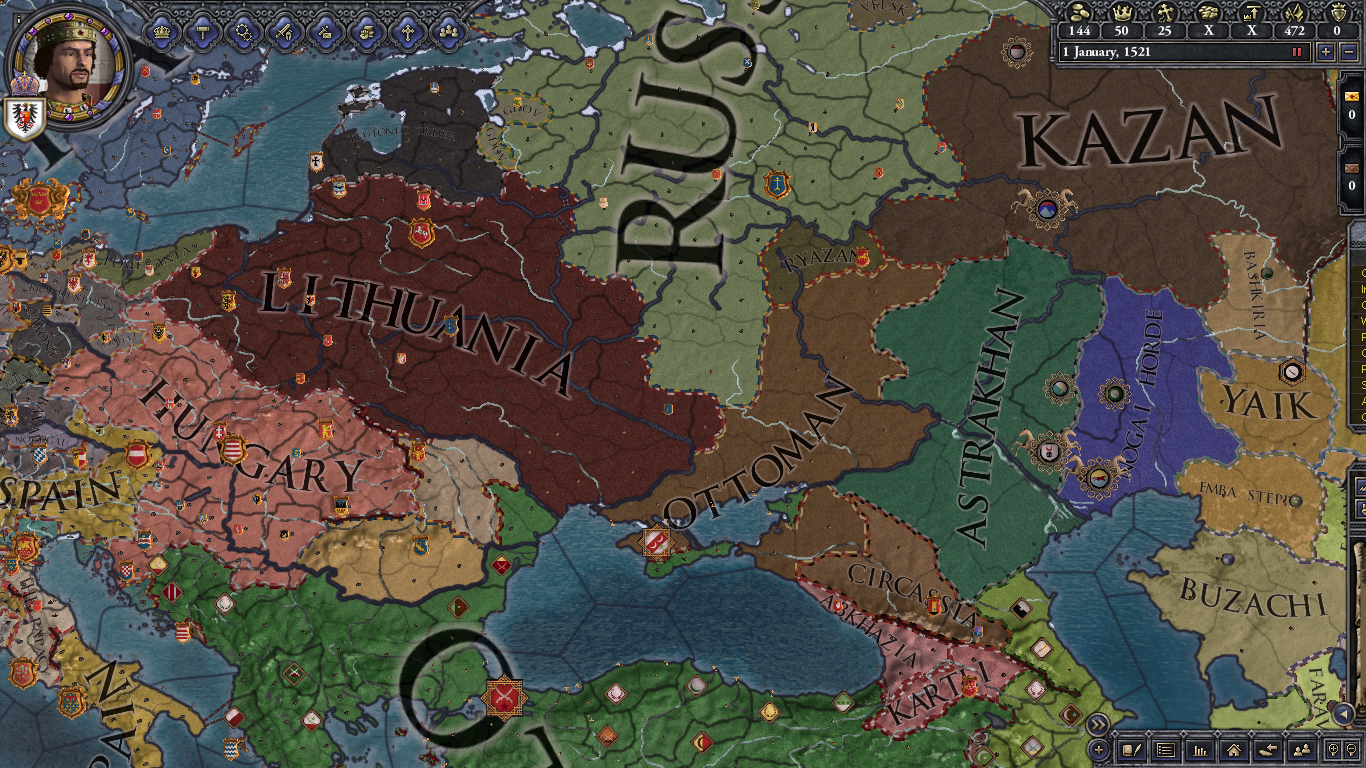 Carlos I of Spain or Karl V von Habsburg has inherited a multitude of realms from his grandparents. He rules over Spain, with various Viceroys managing the Netherlands, Navarre, Valencia, Aragon, Catalonia, Naples, Sicily, Sardinia and Austria.

François I of France is continuing his predecessor's advance into Italy. He also knows Spain can't defend its landlocked enclaves for long, like the Franche Comté. Taking over Calais, the last English possession on continental land, or some of the small, now undefended German states are other opportunities.

The Holy Roman Empire is breaking up. Being the Emperor now means little, so it is best to take as much land as possible for oneself. To make things worse, reformers and protestants are creating alternatives to the Catholic Church, threatening the power of the kings and priests of the time.

Henry VIII Tudor is the king of England. And he will get married a few times before dying. And start up the Anglican Church. But for now there's just a young king, a cardinal Thomas Wolsey and the Boleyns (maybe I'm forgetting a couple other characters). 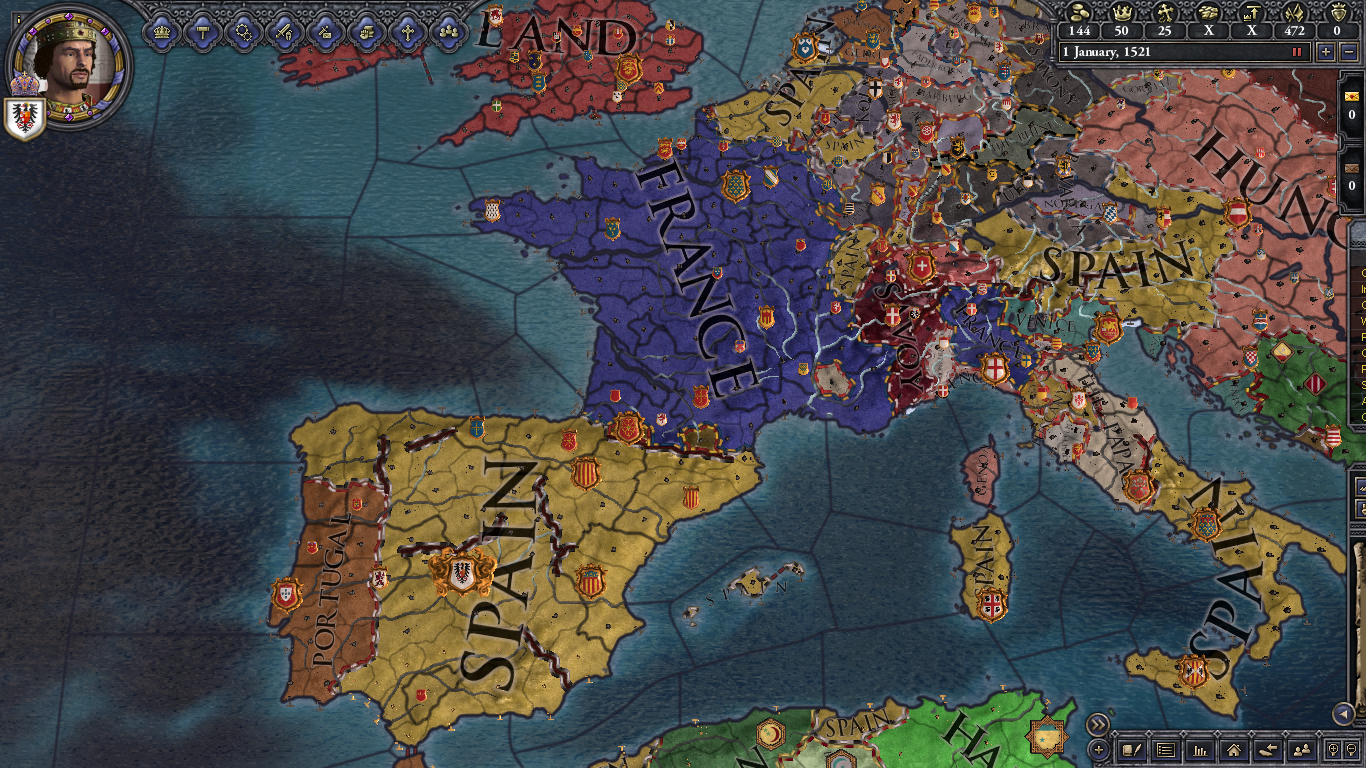 Don't look! There is so much to be done still, especially on the part of the Umbra Spherae Reborn team. However, would like to let you know that Hernan Cortes and Francisco Pizarro are here already. 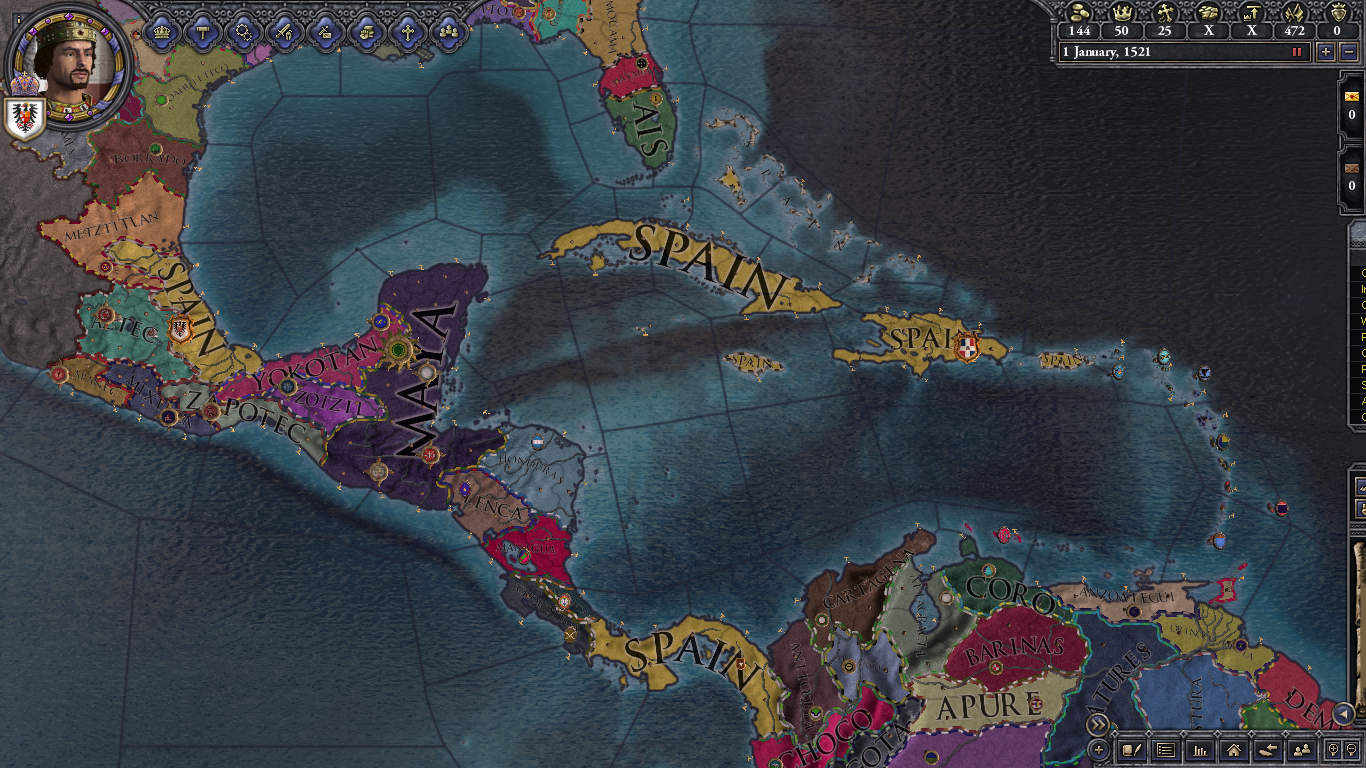 Literally the only thing done is the dynasty tree of the Zhu, rulers of the Ming Empire. Yes, he's a drunkard. 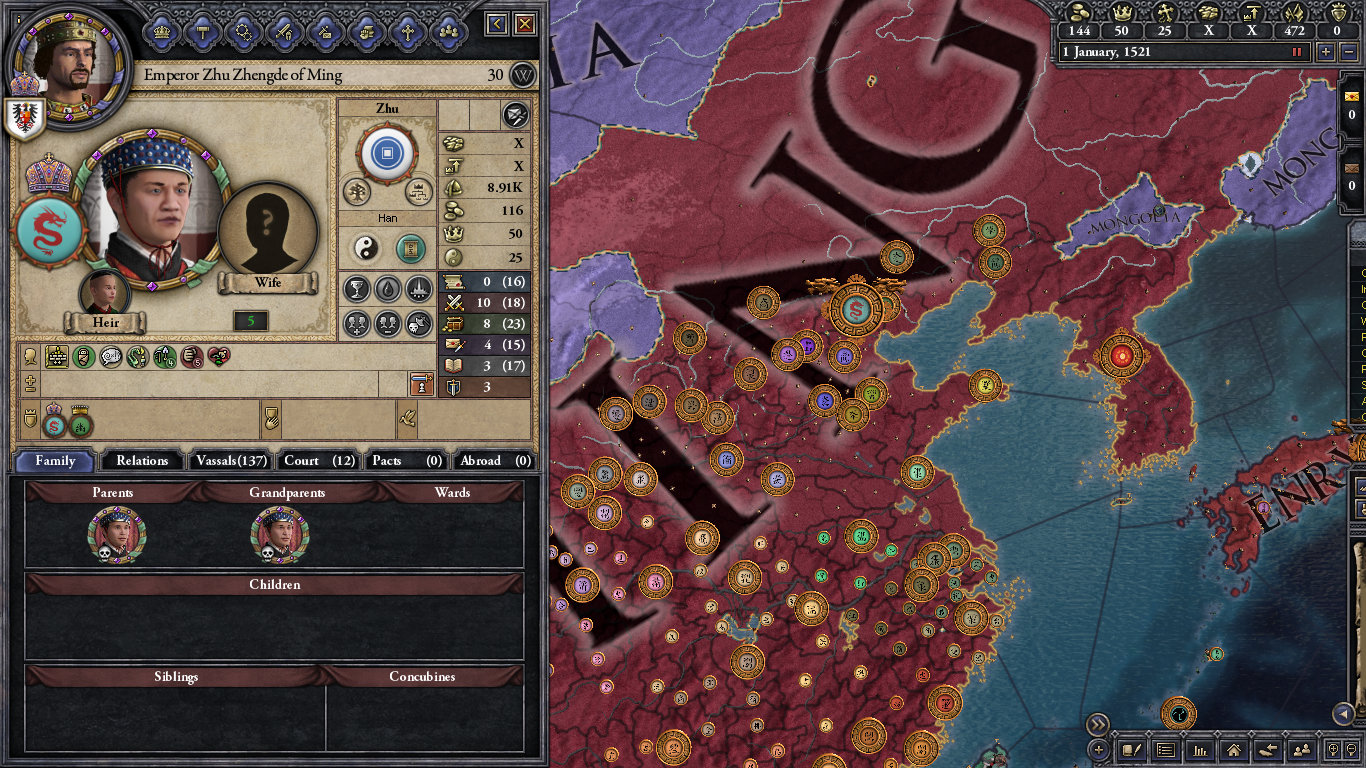 New Features - i.e. fitting the mod in the 16th century

These include the spice trade, the Christian reformation, social upheaval and offmap colonisation.

Updating to 3.x and expanding the focus

Yes, the map stopped working because of the updates. And yes, there were a lot of things happening by the year 1521, not just the Habsburgs.

Fixing offmap China bug and started with the Indian states.

First playable version. Borders of Europe, Middle East and North Africa are realistic (even though vassals are in a very early stage). I am lucky that...

Some states have realistic borders and some family trees are done. France, England, Spain, Italian states, Kalmar Union and the Ottoman Empire can be...

Hello, can you please tell me what dlcs are required to play this mod? Or maybe any? Thanks.

Would you consider putting it on steam

hey, do i have to have umbra sphere running as well? because if i enable this mod, but no other, it's just regular ck2 with no new map, or spain, or big ottomans or anything its just 1066

I haven't uploaded a version with Umbra Shperae just yet. What you need to do is go to custom start and it should show you the date 1521.

Can anyone recommend what is the best way to get support for this? I can't keep working on this mod without it.

Advertise your mod on reddit, specifically in the Crusader Kings subreddit. I'm sure many people there will be interested in such a brilliant mod. Maybe even make a YouTube channel and record yourself playing it while showcasing all the cool features. Keep up the good work!