Okay, this time the update to V4.3 sums up everything that is needed to be ready for us to focus solely on the more fun and bigger updates in the future. So in comparison with the last V4.0 update, this time is kinda a smaller one which adds, of course, the one and only 12th Doctor, his wearable technology and new Sonic Screwdriver. That also means regeneration is possible when u are being him as well (A 25% chance of regenerating into random one of 22 Doctor Who Characters too xD) So I hope you guys can play around with them and then find this update doesn't disappoint so much :) 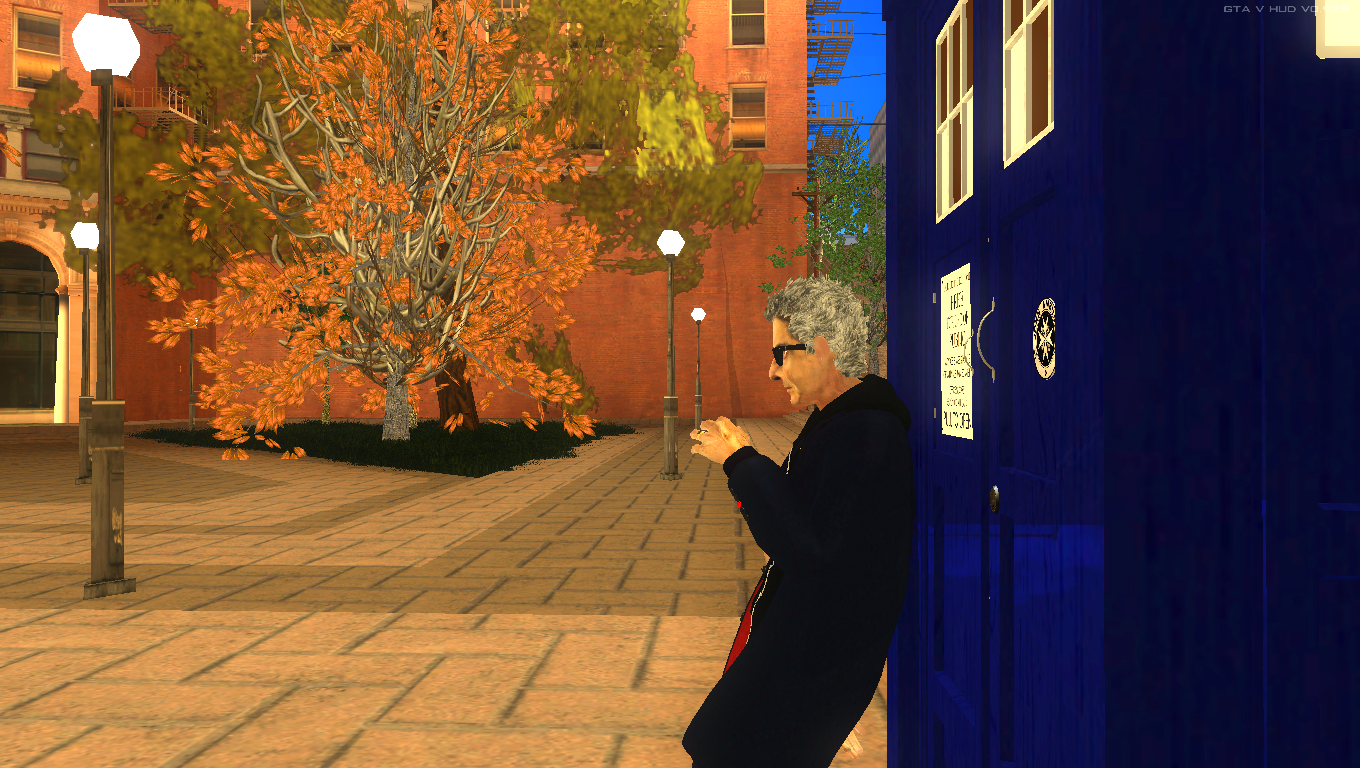 For further details such as instructions on how to play the mod. Check out 'The Magician's Notes' from your GTA: SA game directory after installation.

More information can also be seen from the sick Mod Videos and Screenshots I uploaded :p

If you love our work, you are absolutely fantastic and don't forget to share it with all your awesome Whovian friendz so u guys can all have fun. Thx, That will mean and support us a lot :)

And if u have any issue of bugs or questions about the mod, join our Official Discord Channel! (→_→ Discord.gg) It is a great community for the fans of this mod, here u can discuss anything and I am certain most of us can help you out with your troubles •ᴗ•

The final version has the complete weeping angels missions and the Daleks Warzone.

In order to initiate the angels' missions, simply stand in front of the Clara chalkboard on the 2nd floor of the Tardis interior then press "E" (u have to switch into the Doctor first)

Pass the first mission of the main game to initiate Daleks Invasion.

Fly the tardis very high up and u will end up in space, or u can use the programmed coordinates, if u get out of tardis in space u will be equipped with a jetpack.

Everything else is the same as in previous version instruction manual: Docs.google.com

Thanks you guys for all the support, it was a real awesome journey)

The 12th Doctor's Tardis (Interior Panels and Book Shelves Models are converted from Brian Rocz, the rest of interior and exterior models are created from scratch by Tommy LU),

Time Vortex model and all Tardis, Sonic and Regeneration Animations,

(Made from scratch by Tommy in Zbrush, converted to the game by Bach),

All sound effects from BBC

Thanks Zach for bringing this mod back to live at the end of 2014.

Thanks GTARaj, Shadows43 for suggestions and new resources.

Thanks Mavl for helping to take this mod into the next level.

Thanks Bach for providing even more help and supports.

Thanks for all our fans for your nice and encouraging supports. The Mod will simply not go this far without u guys :)

The final version of this mod has been there for almost two years, put it here just in case some people can't find it) Check descriptions for new stuff...

Check description below for getting V5 beta. That has all new weeping angels missions and daleks.

The amazing 2 enbs that enhance the game's graphics perfectly and 88 screenshots for u to enjoy :p

Recommend GTA SA US v1.0 clean without additional mods, other versions might work fine but not guaranteed. Though steam version is definitely a bad choice...

Help the Doctor to clean the danger of Daleks in San Andreas!

why everytime i boot it it says eax.dll missing

U need to have a clean version of gta sa first and then install the mod into it.

How to turn off daleks?
How fix bug from video?

i believe this happens when u have two different versions of mod install in one gta sa at same time, so script is runing doubled
i recommend u to try get a fresh gta and install v5 to it only

How do off daleks?

there is no easy way of turning daleks off, u can manually remove all dalek named scripts from cleo folder

Hi how do I get the TARDIS key cause I copy all files into version 1.0 and the key doesn't show up😥

Nothing is showing op and I tried that btw