Get the scoop on the upcoming premiere release of Die in Pain, Rest in Peace.

Die in pain, rest in peace. It may not sound like a good way to go, but when you add a glorious fireball erupting from a twisted, blackened husk that was once your vehicle into the equation, it actually makes for some satisfying entertainment. I recently got the chance to check out this not so dreary, post-apocalyptic vehicular combat mod in its late alpha stages. For an initial release, D.I.P.R.I.P. manages to resurrect the car combat genre on the PC platform and does so with smashing results. 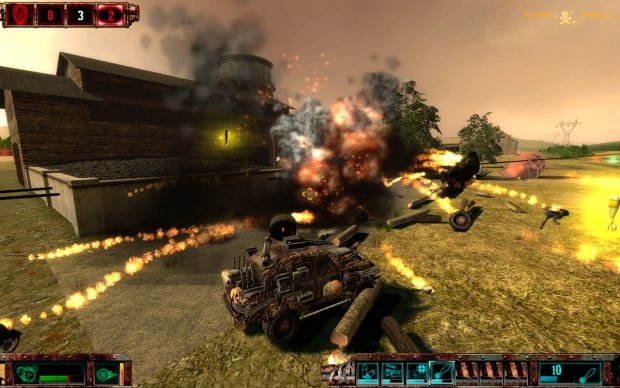 Vehicular combat is back!


The first thing I notice about D.I.P.R.I.P., before I even launch the actual mod, is the amount of polish and care taken to manage all the content delivered through their website and mod profile on Mod DB. Everything is fully fleshed out, just check out their sweet profile header. For a first impression it really does its job to pique my interest and the same can be said for the opening and loading menu screens. The graphics in every other facet of the mod have also received the same amount of polish. Vibrant explosions spew burning debris and billow smoke convincingly. Power-ups are clearly marked with glowing auras so you can see them across the map. Missile trails are tantalizing and informative - depending on the color you'll instantly know how devastating the payload.

The vehicles accomplish the kitbashed, Mad Max inspired look that is common in games of this vein. While the environments also do look complete (there are three available for the premiere release: Supermarket, Refinery and Village), the cars seem a little out of place - as if they had all been transported into a different time period. Aside from that stark contrast, everything manages to reach a level of polish that many mods have to churn through a few releases to obtain. 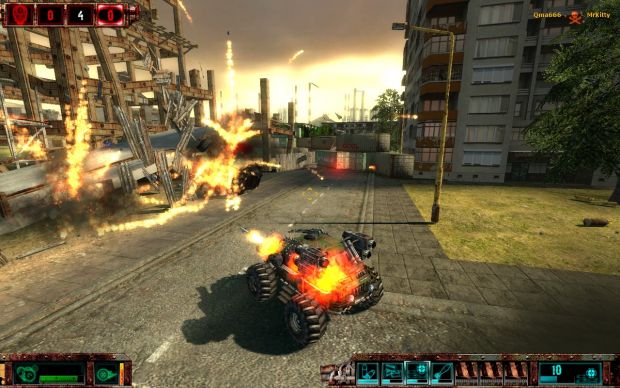 
Sound effects and music are an essential part of the playing experience and the D.I.P.R.I.P. team deliver in this area as well. There is no music in-game aside from the menu music, but it isn't missed. The cacophony of explosions, gunfire and revving engines all over the level provide more than enough to keep you enthralled. My personal favorite is the *thunk*
that's heard whenever you deploy a countermeasure to avoid incoming missiles. While there's still some remnants of Half Life 2 sounds in the mix, there's enough new content to differentiate this mod from the rest of the pack. 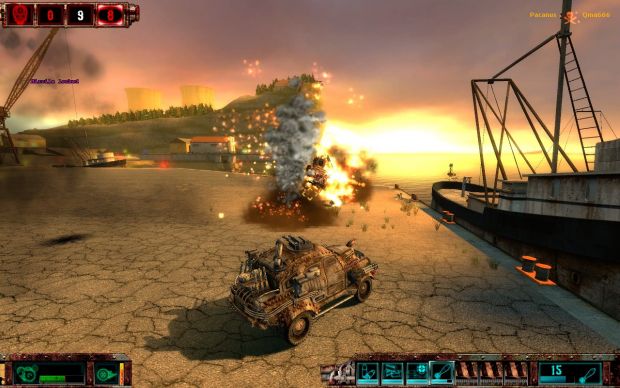 Ah, magic hour by the water.


If you've seen the videos for D.I.P.R.I.P., you'd know this mod is one that caters to complete uncontrolled mayhem and chaos. With this release, you be able to control one of three different types of cars (out of the six slots that I saw planned for future releases) that all have different statistical advantages and disadvantages in armor, speed, weaponry etc. The manic battles manage to keep their attraction thanks to a healthy arsenal that provides machine guns, missiles and mortars to dish out the pain. You can also kill opponents by ramming at high speeds; nothing feels more satisfying than softening up some poor sap with a few missiles and then pummeling him into oblivion while driving out of the resulting explosion.

However, there was one large blemish that marked this preview and that was the loose controls. The cause of this stems from the same reason why the HL Rally team abandoned development of HL Rally 2 for Source early on. Vehicle interactions are handled on the server side, so therefore the more latency you have the less responsive your controls. The server I was playing on provided a ping of around 100ms, yet I still did find it slightly difficult to steer through narrow openings and turn accurately. Hopefully upon release, there will be a wide variety of servers available to offer low lag solutions for everyone.

Servers available during alpha testing had a maximum of 10-12 people that could play. While this may seem a little low for a multiplayer PC game, the maps are designed well enough to allow for constant chaos. There's tons of destructibility in the maps; fences, trees, haystacks, lightposts and doors all crumble as you drive through them. This really adds to the mobility and interaction with the environment as it would be incredibly frustrating to get stuck on every little object in your path. I do hope that future releases would see the team expand on this premise. The ability to shoot down water towers that would crush opponents or blow up a fixed emplacement, like a propane tank, as your nemesis drives by it sound too good to pass up. 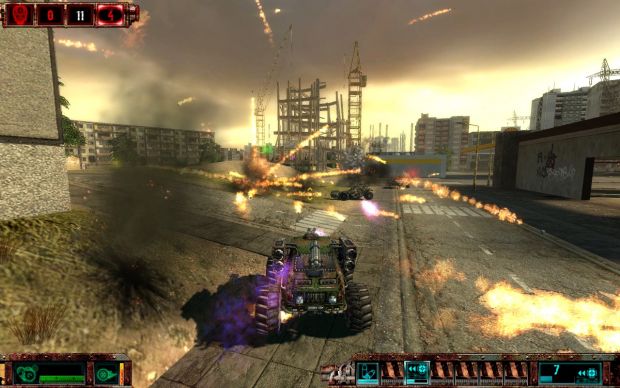 
If you're a fan of the car combat games of days gone by, then this is definitely worth a try. Find a server with good ping and rediscover the mayhem. Once you get past some of the inconsistencies with the steering, you may find this is one mod you'll keep coming back to. In any case, you won't have to wait long - Die in Pain, Rest in Peace releases this Friday, March 7th at 5pm GMT.

agreed. i want an aussie serve too ;(

ask internode for one.

as they can set those kind of things up, they support Dystopia so why not.

great stuff keep pumping out the PR...i should really reinstall all my source engine stuff had to format my HD recently so i havent...damn

Well, I guess now I have to reinstall HL2 again. Looks amazing guys. Any chance of AI opponents for LAN play with a buddy?

Yes, we want to add singleplayer to the game, but its definitely not coming soon.

In regards to the vehicle controls, we will be adding vehicle movement prediction in a future update. We are using our own vehicle physics which gives us full access to what is happening with the cars. We found using Source's vehicle physics not adequate to what we want to achieve and so we have written our own. We will be constantly improving the driving model until we are satisfied with the end effect.

We didn't want to further delay D.I.P.R.I.P.'s release as most of our testers said that the delay in controls is acceptable up to about 60 ping and decided to include that in a future update.

This is going to be sweet ^^

congrats guys you deserve all the mod credit you can get for this!

why does everything come out when i just start work! :(

This has one of the coolest names ever. DipRip :D its catchy.

Wow.. looks insane! Will definitely be downloading this mod.

This article was once again well written. Maybe I got to try that mod too, but there are just so many things that can go wrong. But I hope that this is a 7months of SUCCES!

how long whait?
Looks great , give the client

things that I hope-hope-hope aren't in the mod: hl2 explosion sounds, hl2 missile streamers, hl2 engine sounds. every damn hl2 mod uses those things and its so repetitive :(