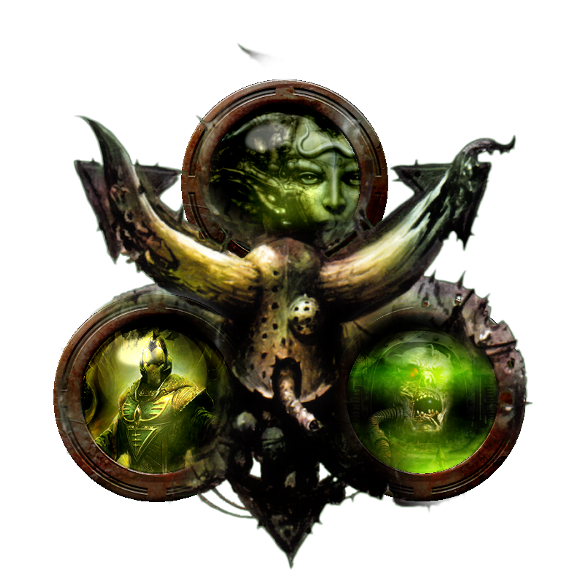 Very few mortal eyes have beheld the Garden of Nurgle.
Its swamplands constantly wheeze a fog of supernatural diseases, and living beings cannot endure so much as a single breath of its repugnance.Only Nurgle himself can spare visitors from his garden's toxic affections; when he is expecting company, he will open a path through the gurgling fungus-fronds with a single magnanimous gesture. Trespassers are viewed poorly in Nurgle's domain, as the Seers of Lugganath found to their cost.

The Eldar of that far-flung Craftworld have long told the story of the Caged Maiden, wherein Isha, the goddess of fertility and healing, is imprisoned in Nurgle's mansion at the mercy of her grotesque admirer.

This project is something that could revive my interest in modding.It was first initiated by my friend SickSick666 and is something i'd like to see completed.
It will come as a four missions campaign for DC/SS.

Anyone* interested in bringing this epic story in-game can contact me at here at modDB or via dedicated channels.

* Skilled modders only. i need people who know what they are doing so we can focus on creation only and not on teaching fundamental and basis of modding to begginners. SCAR coders, modeller, music and sound....anything...you are a guru modder and want this to be done ? come and join.

this project is meant to have a very short developpement cycle, quick fast and furious. no more project lasting years for nothing at the end.

Thanks for voting and helping DEPTHS OF DECAY campaign on it's quest to become the 2021 Mod of the Year. You are now in with a chance to score some free games from our #modlove collection. Help this mod secure more votes by embedding the widget (or link) we have included below on your favorite sites.

OMG it is still alive ....was my dream map for soulstorm when i was young lollll

All voices for Nurgle/Death Guard are voiced: they just need an appropriate FX applied to them. :)

Reposted! Forums.warforge.ru
And now waiting for a new uploads!

I would be happy to assist but lacking of spare time.
But still I can help with something "small and tricky" if needed (if it ever possible, of course).

Needless to say I was amazed by the quality of the showcase brother J-L.

Warsword Conquest is a total conversion of warbands mount and blade 1.153 based on the warhammer fantasy world by Games workshop and is single player...

One of the most long-awaited mods restores the highly desired scabbards. This mod adds 17 scabbard models to all swords. Additionally, a new sword with...

A game of thrones mod with a new campaign map and new troop models focussing on the White Walkers and magic and other fantasy elements by replacing all...

An total conversion mod for M&B2 Bannerlord. Explore the world of Azeroth as a Warchief of the Horde or serve to the Alliance as a mighty warrior in...

Apotheosis is a massive Elder Scrolls V: Skyrim expansion mod set across the 16 Daedric Realms of Oblivion, and Dreamsleeve, home of the forgotten dead...

The Last Days (of The Third Age of Middle Earth)

The Last Days of the Third Age — a total conversion of Mount and Blade 1.011 and Warband into J.R.R. Tolkien's Middle Earth.