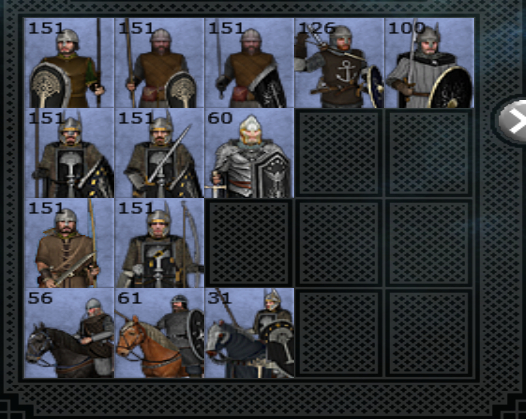 Nice to see some updates again. Looking forward to the Mordor vid.

Nice to see an update. Most of your discussions are probably happening in your forum.
Is King Kong back again?

Aye, though as obvious it's been lowkey for a period due to RL, but back on track. No, afraid not, just resources of his used so thank him.

It is nice to see the Arnor infantry with Gondor weapons, as well as an interesting shield near the cavalry. Will there be armor upgrades (visual)?

Most of them have new textures when upgraded yes; how big the difference is varies.

surprise to be sure but a welcome one,I've been looking forward to this they look great, thanks To God that you are back

I love those Mariners and King's Roquen, the colors are just about right. Those infantry bodyguards look awesome with those helmets.
I can sense this is a mid-tier troops faction, with just about the right troops, not too op, nore the contrary. And i bet more spammable

love it, continue the good work

Its a very all-round faction, and they have top quality among their elites, only matched by Black Númenóreans among Men. But its all in all necessary, for they have numerous enemies on all their borders ;)

Indeed. Numenoreans always had good soldiers,brilliant infantry and archers . It's good they are a very all-round faction :)
At this stage they were much stronger than in the War of the Ring (without a doubt)

Gondor during the war of the ring is stronger than Gondor and Arnor since the last alliance combined. But Denethor was a poor ruler and did not gather a huge army from the southern and western provinces; Only a garrison of 3-5 thousand people defended the city in the movie "The Return of King Aragorn" But this is not the whole army of Gondor.
Arnor is a cold and sparsely populated land, a country of fortresses and snow deserts, and besides, it is full of hostile wild clans. Gondor, on the contrary, is a fertile southern land, a warm climate, like the Reach in the Game of Thrones.

Gondor grew stronger early the Third Age and became mightier than it was during the Last Alliance, indeed, but for the second half of the Age it declined.
Reread Appendix A and its mostly a long tale of decline that would made Edward Gibbon proud, haha. From [both external & internal] wars, pestilance, pride and other calamities.

"Yet at the last, in the wearing of the swift years of Middle-earth, Gondor waned, and the line of Meneldil son of Anárion failed." ~Silmarillion; V

At the War of the Ring Gondor was weak, far weaker than during the LA. In LotR Sauron's combined forces almost destroyed Gondor in a matter of weeks.
That more forces came not to Minas Tirith was not because Denethor was a poor ruler but because the coastlands were to be invaded. Ergo, Gondor had no longer forces enough in total to protect itself sufficently.

Compare this to during the LA when the young Gondor could hold off Sauron and his combined forces [including many Black Numenoreans] for 4 to 5 years, alone, before Elves & Arnor arrived to give it aid.

When in LotR the Black Fleet had been defeated and Minas Tirith was saved southern forces in Gondor were brought in to defend MT and to march on the Black Gate. In the attack 6 of the 7 thousands were gondorians. These were not everyone in the realm certainly, but a significant part (perhaps near a third of its pre-war strength according to one estimation).
The prince of Dol Amroth laughed at the whole situation (RotK; The Last Debate):

"‘Surely,’ he cried, ‘this is the greatest jest in all the history of Gondor: that we should ride with seven thousands, scarce as many as the vanguard of its army in the days of its power, to assail the mountains and the impenetrable gate of the Black Land!'"

A key, if not the key, theme for JRR Tolkien in all his writings is that of fall; fall from grace as well as from might. A both classic [Greek's golden age etc] and classic Christian perspective on the history of mankind.
The situation at the end of JRR's Ages is always worse than it been before; the Elven realms fell in the First, Numenor fell in the Second and in the Third Arnor was gone and Gondor was weak. Yet there is always hope; through endurance, co-operation and self-sacrafice in the face of overwhelming danger :)

Goddamnit! You are a beautifully awesome person!! Better! you are a BRO! One of the mightiest! If i had a clan called Grey Company you would be in there. "If by my life or death i can protect you, i will. You have my sword".
And yes Gondor was mighty in the early third age , when Arnor still existed. When Arnor started to decline the consequences were felt in Gondor, and when Arnor did eventually fell , the power of Gondor started to roll downhill. The loss of the king was a hard blow

Discussing and sharing lore [including on what source basis I reached my conclusion] was the interest that led me to become a modder, and is ever my aspiration; just hope did not came off as hostile doing so.

Hell no! Don't worry , you arrived like an historian(?) (someone who knows a lot about history, in my language called "Historiadores") . It's really cool when people share such informations from the books. Actually my love for the lore is what made me go on a rampage finding lotr mods for many games and follow them . I haven't started to learn how to mod, maybe in the future, now i have exams to study too xD

No you're wrong.
Gondor is much more powerful than the kingdom of Numenoreans in the second era. During the second era, Gondor was several hundred years old, over three thousand years his power has increased many times. Tolkien is certainly a genius, but considering how many times he rewrote the history of his own world, and the fact that he wrote the Silmarillion after the Lord of the Rings and the Hobbit, I would not believe everything that is written there.

Stronger after losing more than half of its territory, suffering from the Kinstrife, the Great Plauge, the loss of the Kings, almost six hundred years of never-ending conflict and the dwindling of its Dunedain population...?
Colour me impressed, I bet you have all the quotes to motivate that.

Anyhow, if Gondor held more power than ever before (despite JRR referring to 1050 and not 3019 for that, as will be seen), all other peoples must been on steroids, in order for them to put Gondor at its most powerful ever into deadly peril...

Now, the Silmarillion quote is aligned with what Elrond says in FotR; The Council of Elrond:
"'But in the wearing of the swift years of Middle-earth the line of Meneldil son of Anárion failed, and the Tree withered, and the blood of the Númenoreans became mingled with that of lesser men.'"

Or in the words of Faramir, in TTT; The Window on the West
"`For the Enemy increases and we decrease. We are a failing people, a springless autumn. ... Yet even so it was Gondor that brought about its own decay, falling by degrees into dotage, and thinking that the Enemy was asleep, who was only banished not destroyed. ... Childless lords sat in aged halls musing on heraldry; ... And the last king of the line of Anárion had no heir.'"

Or Beregond in RotK; Minas Tirith telling how the folk of Umbar "have long ceased to fear the might of Gondor, and they have allied them with the Enemy, and now make a heavy stroke in his cause."

And here follows, from Appendix A in The Return of the King, the history of Gondor's decline:

Between 899 - 1149 Hyarmendacil I ruled: "In his day Gondor reached the summit of its power. The realm then extended north to Celebrant and the southern eaves of Mirkwood; west to the Greyflood; east to the inland Sea of Rhûn; south to the River Harnen, and thence along the coast to the peninsula and haven of Umbar."

So, yeah, it goes down from there (after year 1050 to be precise, according to Appendix B).

Of Hyarmendacil's son JRR write: "The waning of Gondor had already begun before he died, and was doubtless observed by its enemies. The watch upon Mordor was neglected."

In 1432: "the first great evil came upon Gondor: the civil war of the Kinstrife, in which great loss and ruin was caused and never fully repaired."

1636: "The second and greatest evil came upon Gondor in the reign of Telemnar ... a deadly plague came with dark winds out of the East. The King and all his children died, and great numbers of the people of Gondor, especially those that lived in Osgiliath."

19-20th century: "The third evil was the invasion of the Wainriders, which sapped the waning strength of Gondor in wars that lasted for almost a hundred years.
...and in this great assault from north and south, Gondor came near to destruction."

The Nazgûl in 2000 "issued from Mordor by the Pass of Cirith Ungol and laid siege to Minas Ithil This they took in 2002 ... and Minas Ithil became a place of fear, and was renamed Minas Morgul."

2475: "But from the time of Denethor I, there was never full peace again, and even when Gondor had no great or open war its borders were under constant threat."

Steward Cirion in the 26th century: "He was watchful and wary, but the reach of Gondor had grown short, and he could do little more than defend his borders, while his enemies (or the power that moved them) prepared strokes against him that he could not hinder."
Cirion had to call upon the Eotheod to protect Gondor from invasions and give them Calenardhon, where the population had dwindled away; this became Rohan.

Steward Turin II: "All but the hardiest of its people deserted Ithilien and removed west over Anduin, for the land was infested by Mordor-orcs. ... But his chief peril lay in the south, where the Haradrim had occupied South Gondor, and there was much fighting along the Poros."

But well, apperently I'm wrong, so I'll drop this topic with this shared :)

No you're wrong.
Gondor is much more powerful than the kingdom of Numenoreans in the second era. During the second era, Gondor was several hundred years old, over three thousand years his power has increased many times. Tolkien is certainly a genius, but considering how many times he rewrote the history of his own world, and the fact that he wrote the Silmarillion after the Lord of the Rings and the Hobbit, I would not believe everything that is written there.

Gondor at it's height never even came close to rivaling Numenor at it's weakest.

What happened to the old nk foot bodyguards? :o

cool, and the noble volunteers also wont look like in the unit card right?

Hello friends; after a hiatus we round up. These are the unit cards for the generic roster of the Númenórean Kingdoms, avilable across Middle-earth. In order of apperance: