- 3 factions: CSLA, AFMC and FIA (all are already extended with new addons/models in upcoming patches)
- a lot of own detailed models which are fully compatible with OA (for example support of TI materials)
- detailed specification of all units from riflemen, through assistants, to ammo assistants
- advanced setting of penetration and armour of all vehicles (different thickness of armor)
- possibility of texture changing using CFG on all vehicles
- all hand guns and weapons on vehicles has the option for setting of zeroing
- all static infantry weapons can be unmounted and moved to another position by men or vehicles
- advanced system of backpacks: ammo, canister, repair and medical backpacks
- creating of trenches for units and vehicles
- all new intro animations for all official islands
- and many more ... 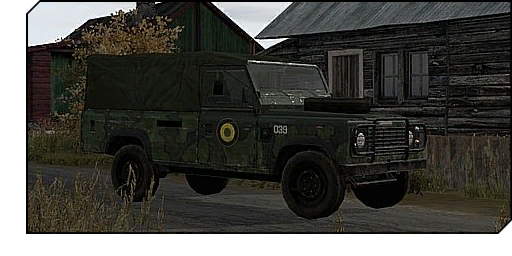 Move stealthily into the village of Solnichniy and steal an AFMC Land Rover. 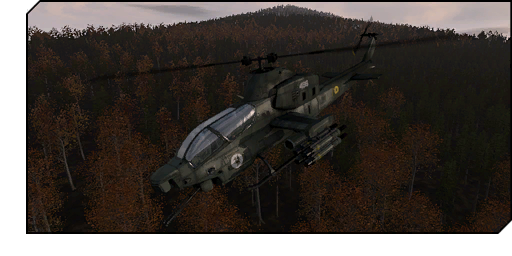 Destroy the enemy convoy. The ammo supply must not get to the hidden howitzers. 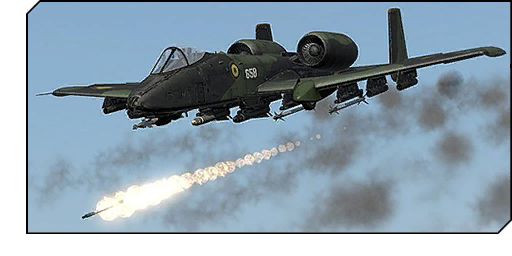 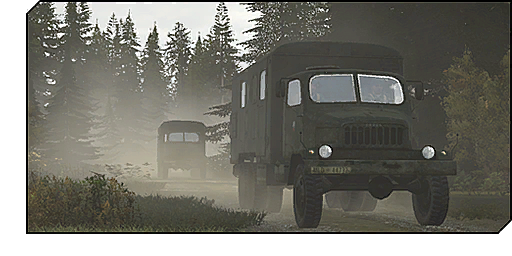 Convoy escort of service vehicles across the territory controlled by the rebels forces. 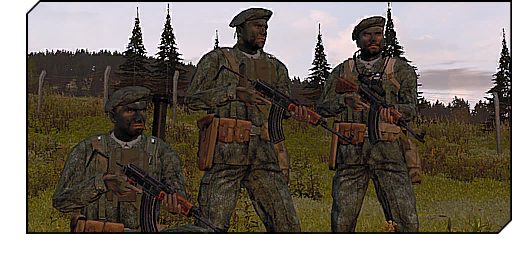 Deep in the enemy territory. Deal a crushing blow to rebels in Chernarus. 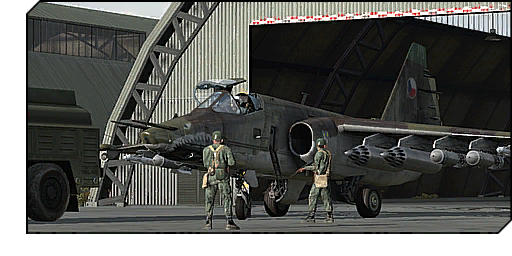 Our scouts revealed the presence of an ammo train near the Komarovo village.
Destroy this train before the weapons reach the hands of FIA rebels. 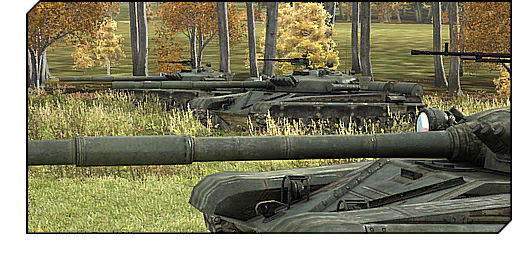 Combat recon across the enemy territory. Your crew is waiting in the T-72. 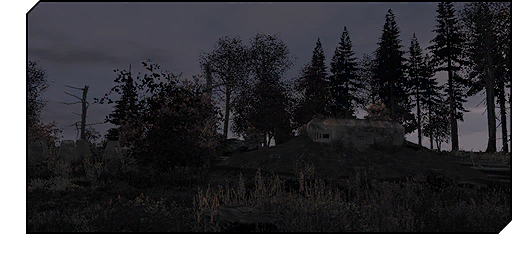 Locate an old fortification, capture it and hold the position at any cost. 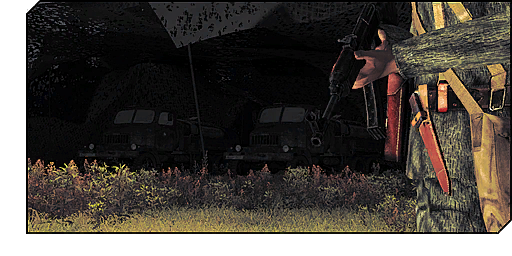 The camp of CSLA vehicles was located. Now remains to place the explosives and detonate them.

To help you with some advanced editing of MP/SP missions under our mod, you may use Editor's Reference Manual in the latest version.
Download it here: Editor's Reference Manual v.2.13
Another helpful documents can be used for the modification of our MP misiions Protectors.
How to Guides can be found here:
For the full version - Protectors CSLA vs. AFMC
For the Lite version - Protectors Lite

Once you will start of modification of our MP missions, keep us in the credits as original authors.
And for sure is better to contact authors before you start with any modification.

IMPORTANT NOTE:
You need to have installed both games - Arma 2 and Arma 2:OA to launch the MOD
Common installation of these two games is called also Arma 2:Combined Operations (Arma 2:CO) 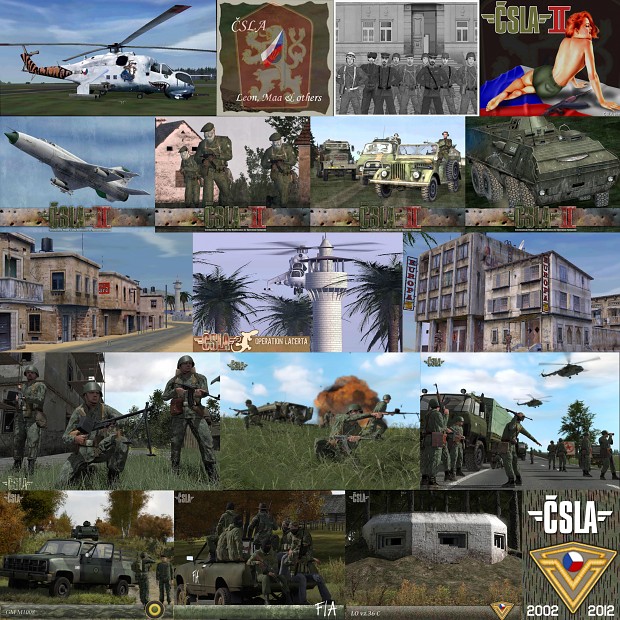 History of real CSLA:
The Czechoslovak People's Army (Czech: Československá lidová armáda, Slovak: Československá ľudová armáda, ČSLA) was the army of the Czechoslovak State from 1954 until 1990. On March 14, 1990 the Army's name was changed to the Czechoslovak Army removing the adjective "People's" from the name.Since 1955 it was a member force of the Warsaw Pact. The force was split into the Army of the Czech Republic and the Armed Forces of the Slovak Republic after the 1 January 1993 split of the two states.

Ground Forces
Ground troops were the largest component of the Army. They contained infantry, supported by tanks and armored vehicles. Czechoslovak military doctrine demanded large tank columns spearheading infantry assaults. While the armored columns secured objectives, the infantry would provide close support with mortars, rockets, anti-tank guns and large artillery. Infantry units could also draw support from engineers, artillery, chemical troops, railway troops and paratroops. Additional services and equipment provided the combat services the necessary technical and material equipment they required. Engineer troops were equipped with road and earth moving machinery, recovery tanks and equipment for the transportation of troops across rivers and other terrain. Railway troops were able to provide construction and rehabilitation railway, including bridges and communication and security equipment and maintenance rail vehicle.

Latest version of CSLA Mod for Arma 2: Combined Operations has been officially released. 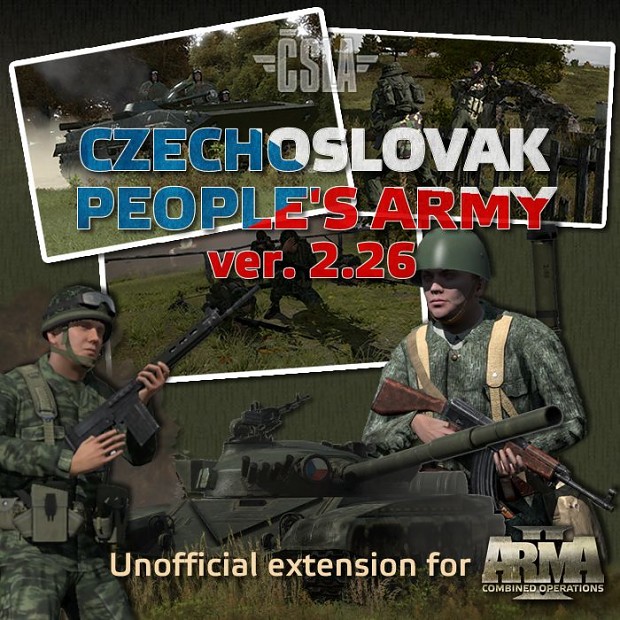 This release closes another chapter of our work.
We will no more come back to this version of Mod, because we found that the interest of the community for an CSLA Mod has decreased significantly.
Also, this led us to the fact that for the final edition of Mod, we canceled planned second campaign and additional vehicles for AFMC and FIA (various versions of M113, LAV-25, BTR-50, ...).

Anyway, in this final release, you will find an improved MP COOP mission Protectors in version with CSLA playable slots.
This mission includes several new playable slots available for partisan units FIA - if players will occupy these slots, they can significantly and actively mess up the tasks for "normal" CSLA players.
Info about this version of the MP mission is also linked to another novelty - a completely new characters of FIA guerrillas.
They have a new fatigues (pattern is called MLOK) and they are also available to carry any type of backpacks, which doesn't allow the original game.

This latest version of the Mod is completely full package of addons and other additional stuff (reference guides and manuals), so you don't need to apply any patch - just run the installer which will take care of overwriting of old PBO files.
As in previous release of Mod, was published also a huge campaign '89, the updated version is also included in this last release.
We did there a lot of corrections and adjustments, so we hope that you will return to the campaign again and try it "survive" it again, but for example with another end of the story.
If you will be in any kind of troubles in a campaign, you may look into the installation directory of Mod and there you may find a very detailed campaign flowchart, which clearly shows the flow of missions.

As an additional bonus to the latest edition of Mod, you may also find (in the installation directory) a small ZIP archive, which contains various versions of DVD cover.

And what will happens with CSLA Mod in Arma 3?
Given the minimal interest/community support for our work, we consider to do a radical solution - we will do all Mods only for our private purposes and our own pleasure - as we are already doing now.
But who knows ... maybe something will change in the meantime :)

Hello folks! Something is coming ... countdown has been launched.

Another update for upcoming patch, some of the FIA units changed their clothes to camouflage pattern "MLOK".

The next and last patch for CSLA Mod for A2:CO will contain also redesigned FIA units (troops) with feature to carry any possible backpack.

Latest and the very LAST version of ČSLA Mod has been released - v2.26. This release contains all previously released data! See more below.

This is a small fix for SP campaign '89 released in the full version of the CSLA MOD for Arma 2:CO v2.26

Small application for converting WAV sound files to OGG and LIP formats which are used in ARMA series.

This package contains multilanguage DVD covers for your favourite modification

This PDF document contains very detailed walkthrough for all the missions in the campaign '89. Unfortunately it is written only in slovak language, because...

ArmaSeriesLauncher With this launcher you are able to run any Arma series game (like CWA, AA, A2, A2:OA, A3) with previously adjusted parameters and selected...

Hello, such a question, this mod is compatible with CWR 2?

Hi, probably yes, but consider that our Mod is a total modification of the original game and can not be 100% compatible wit any other community Mod or addon.

I bought Arma 3 but my laptop can't run it without downgrading graphic to the point everything look like dolls and block :( , so Arma 2 is still my prefered Arma :)

Hey EMSI,
could you tell me if this mod is compatibile with ACE?

Oh this is too good to be true. I've always liked Slavic armies, and it's always something special when they're given the attention they deserve in games.
As soon as I get a computer that doesn't suck, I'm getting this mod!

Minimal community interest? I thought this was one of the best mods out there.

Is this expansion compatible with other unofficial expansions? Such as the DAF, RHS, SAF? I need to know :D

Are the other unofficial expansions such as DAF, RHS, SAF compatible with CSLA?

I have nothing to say. Great mod, great models, everything is perfect. I am Czech so I just can't don't love this mod! Beautiful =)