In Commando, you control Marine Captain Jack "Havoc" Sheppard, a GDI commando. With a pack of C4 explosives, hand grenades, a M82 sniper rifle and a combat knife, where Jack ever goes, he leaves a wake of destruction. Explore beautiful environments as you fight your way through dry deserts, snowy mountains, green forests and deep jungles. In multiplayer, the action focuses on the global conflict between the UN-funded Global Defense Initiative and the evil Brotherhood of Nod quasi-terrorist organization. Command your units and conquer the enemy. Be the soldier on the field and utilize a vast variety of weapons ranging from a M9 Beretta pistol and FIM-92A Stinger to devastating superweapons, GDI's orbiting satellite-based Ion Cannon and Nod's Nuclear Missile launched from the depths of Nod's Temple.

In Commando, you control Marine Captain Jack "Havoc" Sheppard, a GDI commando. With a pack of C4 explosives, hand grenades, a M82 sniper rifle and a combat knife, where Jack ever goes, he leaves a wake of destruction behind him. This a mod for C&C Renegade which restores the original character model of Commando and many pre-release items. The single player mode has been made more difficult.

INSTALLATION
First of all, you need an authentic English version copy of C&C Renegade. Copies can be found for sale on Amazon and the EA's Origin.com service as part of their Command & Conquer collection.
An alternate (RenegadeDebugInstaller2) installer for the CD version is provided in the archive. You will need a serial key, found at the back of the manual or jewel case.
Update Renegade to version 1.037 (renegade_1037_english.exe in archive).
The community patch must be also installed from tiberiantechnologies.org/downloads. A copy is included in the archive.
Then, install W3D Hub Launcher from w3dhub.com. A copy is also included in the archive, but it's recommended to download the latest version.
Extract the com-release folder inside W3D Hub's "games" folder.
Finally, copy the following files from Renegade's "Data" folder to the Data folder of com-release:
always.dat
Always2.dat
M00_Tutorial.mix
All files starting with M01.mix and ending with M13.mix (campaign maps)
If you want to play Renegade's own multiplayer maps, copy files with starting with "C&C" over as well.
Run the game by starting game.exe. Please ignore the updater warning, Commando doesn't use it.

DID YOU KNOW?
The singleplayer mode starts with mission 3 "The Plot Erupts". It's propably one of the earlier missions Westwood Studios developed for the game.
To toggle between weapons in vehicles, press 1 or 2 number keys on your keyboard, shoot with left or right mouse button to fire.
The windows on GDI Humvees and Nod Raptor cycles can be broken. Try it!
To fire certain weapons faster, click the mouse repeately.
Humvees can reach speeds upwards of 80 kilometers per hour, just like its real life counterpart.
To unlock extra units in solo multiplayer mode, press F8 and type "extras". Holt ALT when clicking on a purchase category. Drive Westwood Studios battlebots and become a chicken. Note that chickens cannot drive.
Ravenshaw (not the shorty one) now smokes a cigar as seen in concept art. 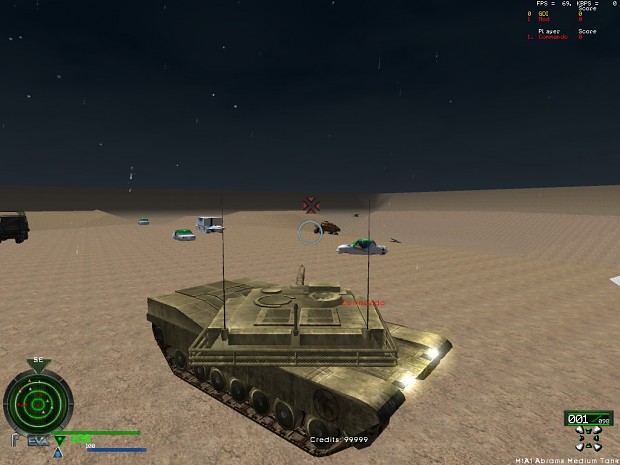 i cant find any "games" folder in w3dhub or com-release folder. where is it?