C&C:Reloaded --> New YR mod that mixes the Tiberian Sun Universe with the Red alert 2 Universe in the same game (Requires RA2:Yuri's Revenge Expansion)... 2 New Sides... New Tecnologies... 3 Common Enemies: Soviet Union, Yuri & Kane but only one can dominate the World!!! Choose Your Destiny Commander: * Allies have Powerful High Tech Weapons & Units. * Soviet Union have Brute Force & enormous masses of troops at their disposal. * Global Defense Initiative have High Tech Units & Weapons. * Yuri can use their Psychic Weapons to perturbate enemy troops. * Brotherhood of Nod use advanced deadly Weapons based on Tiberium Technology. Yuri wants to dominate all the independent minds to enslave them under a single power and control... Kane... It will finish mutate the planet (The New fused World with the Allies & Soviets Reality) into the Tiberian world that he predicts like "the evolution"... Technology of the Peace... You must choose only 1 army... Only 1 can Dominate to... 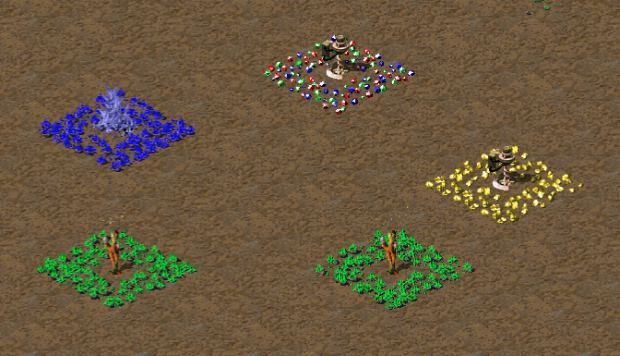 so we can use both ORE and TIBERIUM in the same time?
if yes, thats a good decision IMO

It wasn't intended for 2.3.0 but finally will enter into the release.

Internally the game have 4 types of Tiberium but in TS/RA2 only were used the first 2 types (Green/"Riparius" & Blue/"Cruentus") and from those 2 only the green Tiberium was generated by Tiberium Trees (in Firestorm modders were capable to mod this behavior).

Thanks to Phobos now any existing Tiberium type can be spawned by Tiberium Trees/Ore Drills, So I restored Ore & Gems replacing the 2 unused resources ("Vinifera" & "Aboreus") and those 2 RA2 resources can be added/mixed with the Green/Blue Tiberiums in maps.

The RA2 resources grow/spread stats will a bit similar to the original RA2 game and unlike Tiberiums they will not hurt/heal infantry/mutants/cyborgs.
In addition, because Gems can't spread I increased the money produced (from 50$ to 75$ per harvested resource unit) so it will be more valuable than Blue Tiberium (60$) but safer.

The MP game option that converts Tiberium into RA2 resources will continue available because it's only a graphical re-skin and disable some characteristics related to Tiberium.

Ah yes, as you can see in the screenshot I added a specific resource Drill for Gems ;-P