A breakdown of the content produced this summer, as well as a few feature highlights and an annoucement at the end.

In the last few months, an extra amount of effort has gone into updating the mod's client that has been generously provided by Starkku of the Project Phantom mod. The main emphasis has been giving players a unique experience, and the client supports this in a number of ways. For starters, I decided to enable the ability for players to set a few parameters more detailed than normally offered in projects. Starting units are another popular aspect of Command and Conquer, and a variety of the games in the franchise have their own unique way of catering to this classic concept. In CnC: Final War, players have several options on how to start with forces in play already.

An early screenshot shows off the Bonus Tech options,
which players can use to disable optional units. 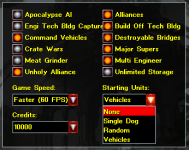 Another early screenshot shows off the choices for starting units,
which allows for a variety of audiences to find what they desire.

Another emphasis I aimed to achieve in CnC: Final War was a robust and modular set of game modes that could be toggled back and forth, as well as a way to filter maps based on conditions such as starting point layout, design, and later in development map-based game modes such as Megawealth. Utilizing the toggle options seen in the second screenshot above as well as the drop down filter selection seen below, players should be able to create custom battlefield rules oriented just as they see fit. 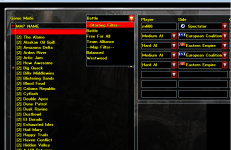 A testing screenshot of the Map Filter selection menu.
These are merely map filters, and have no rules attached to them.

Many new features have been added to the mod since the last developer post, and the content available has rounded out into quite the project. For starters, all sub factions have been completed and fleshed out. The Remnant Legion went through an overhaul to increase their diversity and address serious balance issues from old designs. Maps have received new tech structures, such as the Tech Refinery, and additional capturable goodies such as Turret Nodes and the Repair Faility. 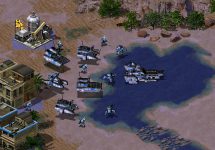 The ATOMOS Initiative utilize hover and amphibious platforms,
and are the forces that have authorization to utilize the ECC Tanya. 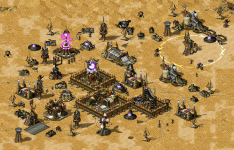 Secret Labs received a serious upgrade, with the Tanya's Time-shifters! These powerful units are familiar Yuri's Revenge units, given a Final War conversion and hidden away on the maps. There are three vehicles and three new heroes hidden within, left as secrets for players to discover. The temperate theater has also received some upgrades, allowing players to create full urban environments as well as emulate the old Red Alert Interior theater! 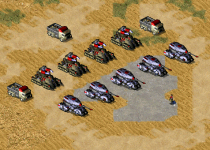 Tanya and her misfit band of time-traveling weapons.

Not to be forgotten, the AI of the project has seen drastic improvements made by an extensive overhaul that expanded and diversified their tactics. Beta tests have pushed the balance more and more favorably, and the map pool grows still. Final touches are applied every time the mod updates, and a release is planned for October 1st, 2018! Stay tuned for an official announcement trailer, and enjoy the carnage below!

Fall Before the Legion! - Mod DB