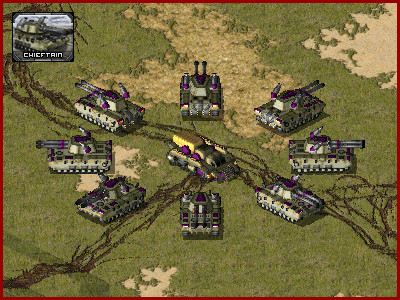 A prototype variant of a reinforced old war Heavy Tank, the Chieftain was designed to take the role of the MBT before the advent of portable tesla coil weaponry. The heavy-bore cannons are still powerful enough in today's battlefield, and the effectiveness of Flak weaponry can be seen as this vehicle can target both infantry and airborne threats with the powerful explosive rounds.

In version 2.0 of CnC: Final War, players who spy War Factories that are owned by their opponent will no longer confer veteran status but grant a tech unlock for an advanced MBT. These advanced MBTs feature similar damage output, but gain the advantages of the faction's advanced technology effectiveness and anti-air capabilities.