A new version with more content and better balance is about to be finished! Read the news for more details and the upcoming tournament! 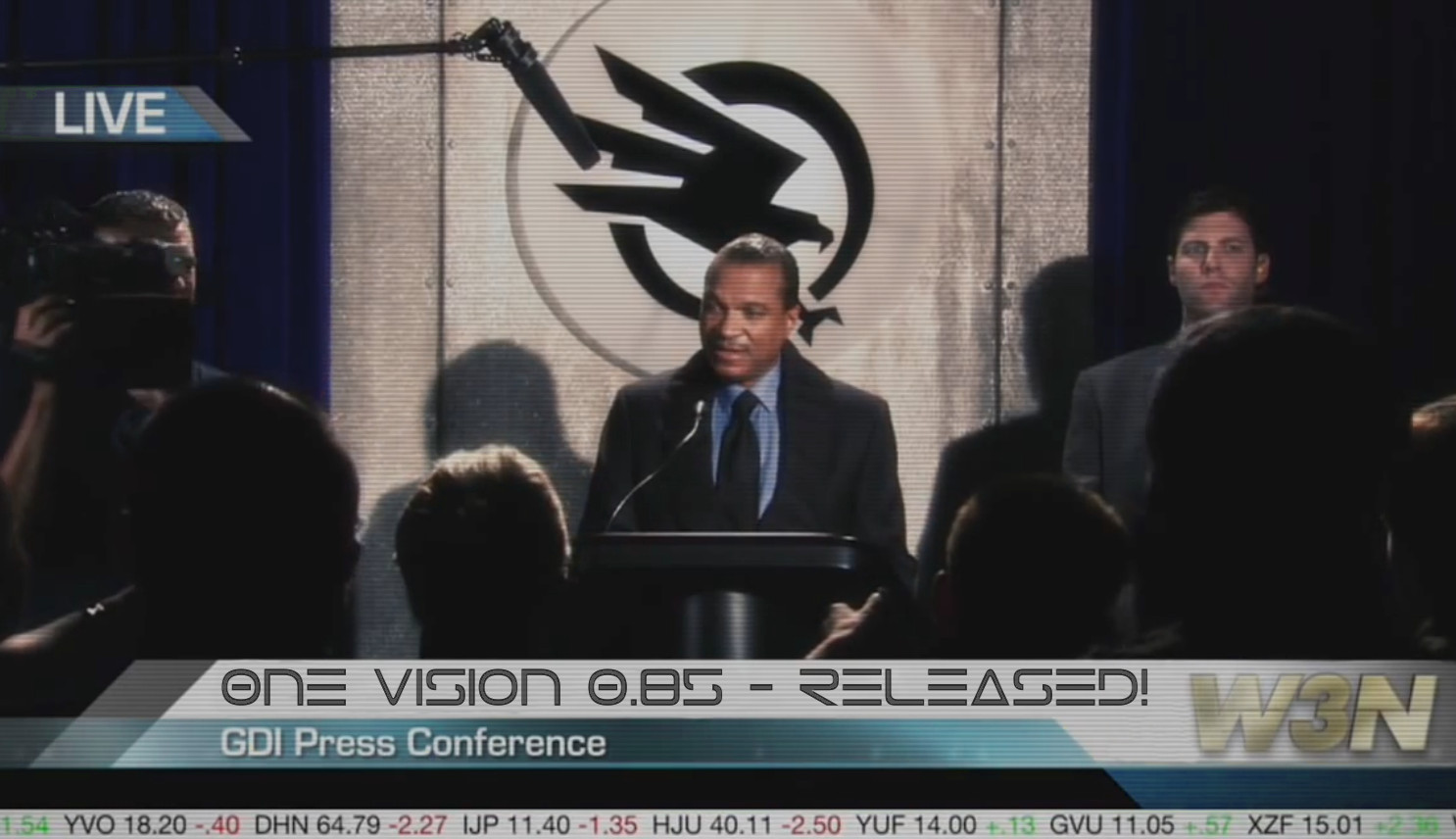 It's been now 7 full releases and almost 2.5 years since the mod was first released in 2013. Since then, One Vision has grown considerably in quality and content size, improving Kane's Wrath to the point where each faction truly has its own unique playstyle and visual theme.

For the future I want to go further on this route, giving every faction more flavour and improve the visual quality of the mod in particular. You can also expect to see more units backported from Tiberium Twilight that actually fit into the visual style of Kane's Wrath. While all factions already have a health range of units, I'm considering giving every faction a unique T4 unit ;)

After many releases of providing all factions with more units, upgrade and special abilities, the focus of this release was on fine-tuning the 9 factions to the point where no single faction has a definite advantage over another. While perfect balance is an almost impossible undertaking, this release is a big step into this direction.

Much polishing for this release was done and it is now even more balanced and more fun overall. If you did not read the first announcement post, please take further information from here: Moddb.com

For the meanwhile you can sign-up on CnC-Online for the best CnC online experience as well as signing up to GameReplays.org to receive information on upcoming events and tournaments. 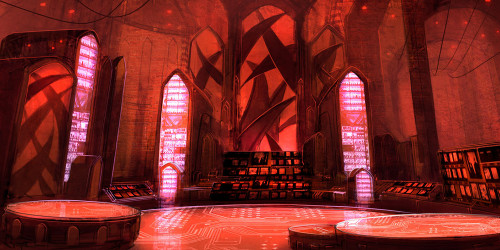 To see the new units and effects of the mod, you can browse through the images to see what the new version has to offer. Below you find a short summary for every faction, but you can also read the complete changelog if you want more detailed information: Pastebin.com

Renegades: Avatars can now be upgraded with Laser Capacitors to unlock the second beam without the commandeer ability. Also, when using Combat Drugs you only damage your infantry rather than killing them after 20 seconds.

Marked of Kane: The new Centurion Walker serves as backbone in tank-heavy engagements. Furthermore the upgrades for the Myrmidon are now much cheaper, which improves T3 a lot. And having replaced the Rocket Militants with Reaper cyborgs, MoK is now a high-tech cyborg army to the core.

RRF: Orcas can be upgraded with Mortars as second loadout and the Carbon Fibre Armor upgrade further improves armor and speed.

Steel Talons: Only Improved Heavy Hammerheads, and performed minor changes. Steel Talons is already very deadly as it is, they will have to wait for next time to receive some new toys ;)

ZOCOM: Slingshots and Shatterers can be upgraded with additional armor. Also, Echo Troopers (artillery infantry unit) don't require the "Echo Division" upgrade anymore to be unlocked and they can now also shoot through obstacles.

Messenger-8: Like Steel Talons, this faction is already very well rounded. The Ion Supercharge upgrade is a little more expensive and the upgrade also increases the power of Gunwalkers to a smaller extent.

Traveller-59: Tweaked the Agonizer infantry unit and also increased cost of Cultists. After all, there must be a reason to play all the great upgrades and assets they have rather than spamming Cultists ;D

To round up the news for this version I want to announce that One Vision now fully supports the Global Conquest mode! All units can now be picked to create a strikeforce of your favourite One Vision units.

This also comes with adjusted cost for many units, making rounds of Global Conquest more balanced and fun. I hope you enjoy! 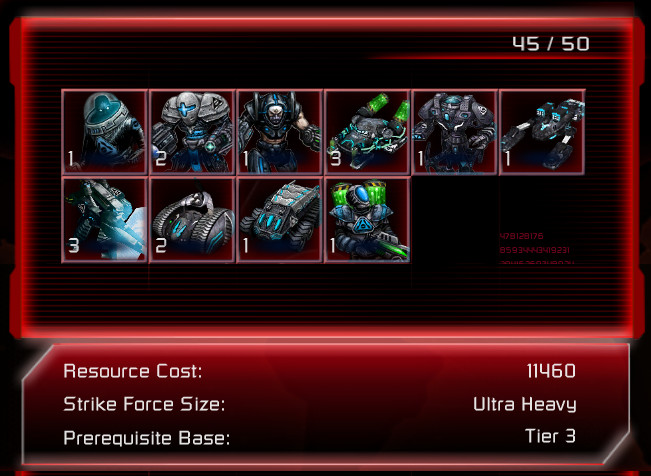 That's it for now! As always, I am more than happy to hear your thoughts, feedback, bug reports or read more reviews.

Good boy i give you a medal for that

Yeeeeessssssss!
I'll check it out mediately when I'll be back at home!
Thank You, Zocker, for this "Easter Egg" }:D

Tournament info will be posted in the within the week so keep an eye out guys :D

How do you use this mod on the steam version?

Conquest Support is gonna be good >:)

Fantastic,keep up the good work.This mod keeps getting better and better

Congratulations on another amazing release!

A few bugs I ran into:
- Unit and building names for some faction specific variants are still using the vanilla names (Tech Assembly / Tech Lab for BH)
- Units in the Global Conquest army editor will not display their actual name or will display "missing" until you click on the unit name, which will then show a description with the appropriate name, but the unit in the list will still use the wrong name.
- Damaged Steel Talon Behemoths will not use the proper damage model, but rather the husk model, with 2 barrels missing and one bent out of shape (at least, it did with the Talon Armor upgrade researched, not sure if it did it without the upgrade). It could still fire normally, though.
- Sometimes the AI does nothing (Easy RRF AI did nothing against me as MoK, they spammed 3-4 infantry squads, build a few power plants and a barracks, then stopped.)
- MoK Tiberium Nuke has no recharge time and is available instantly after placing down the Temple of Nod.
- MoK Air Support Tower and Power Plant still use normal Nod models instead of the ones with the MoK logo, as shown in the portrait picture.
- Black Hand Engineering Bay or War Factory placedown model (the transparent one when you place down a structure after it's complete) shows up as the vanilla Nod one.

And a small pet peeve: Should all Nod factions rely on fanatics? MoK should get drones (I guess that old CABAL Swarmling model from Incursion would be a nice fit, I think someone remade it).

Maybe another suggestion would be to give the MoK a different, more unique, robotic/cybernetic Commando, as well as a Rocket-launcher (AA at least) infantry.

Otherwise, a fantastic release! Keep up the good work, I really love playing this mod! :)

I also noticed bugs with Behemoth and Tiberium Nuke as well. Yet though, in case of the latter, I though it's because I loaded a skirmish that I played on version 0.81. It seems to be a new version bug, though.

I'd love to see the return of the cyborg commando. Reminds me of those days of using a subterranean APC and releasing one behind enemy lines and wrecking their base. Good times.

So, What's corruptive aura? I don't know how to mutate Reaper-17 units now

Move them into the green aura emitted by certain structures like the drone ship or refinery. Then you can upgrade them by clicking on an upgrade under their unit portrait

I'm would love unique T4 units, and walls for the scrin. In addition after playing CC3 for a while with Tiberium Essence and their gates, I realize that unless you can make them automatic they are too micro heavy, so I no longer desire them. I wish you luck.

I saw a player build more than one epic unit in verson .85 how did he do that

You can build 1 epic unit per faction. So in total you can have 3 marv, 3 redeemer and 3 hexa.

I found a few bugs in conquest mod.

Thanks to make this great mod!! I wish you good luck :D

i have problems to run the mod. everything is installed correctly but the mod launcher say: cannot open D\documents\command&conquer3 kanes wrath\Mods\onevision\one vision_0.86.big. the system cannot find the file.