This news gives an overview and the date for the next big release of the Kane's Wrath mod "One Vision".

One Vision, One Purpose

The time since the last release has not gone without One Vision making considerable progress. The next huge release is about 99% done and what still remains is testing for bugs and minor tweaks here and there.

Up until the last version, the main effort of One Vision went into creating a diverse faction framework to bring the factions to an equal power level. And while you can still expect a lot of new units and upgrades, much more effort went into balancing and reworking the game on a much grander scale.

Moreover, I want to share with you the major points present in the release of One Vision 0.8. 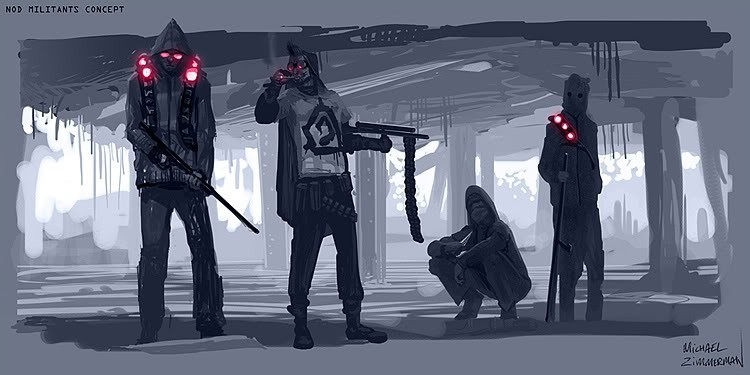 Infantry as a valid troop choice

While Kane's Wrath never had huge balance problems, one of its definite issues are ill balanced infantry forces. While the infamous Black Hand Manspam" is an effective no-brain tactic and Traveler-59 Disintegrators can be used effectively for rushing, you hardly see any proper use of other infantry forces (let alone Riflemen!).

This is why one of the biggest improvements in 0.8 is infantry. Almost no infantry unit has been left unchanged and especially heavy infantry became a much more powerful force to use.

Also, many units like Missile-Squads, Black Hand units or Ravagers received a complete rework to fit them better into the overall balancing framework.

While each faction utilizes infantry differently, I want to offer an alternative way to compose your army. Something that is not about armor and speed (like tanks), but instead a slow moving horde that delivers a punch but is also expendable to a certain degree. 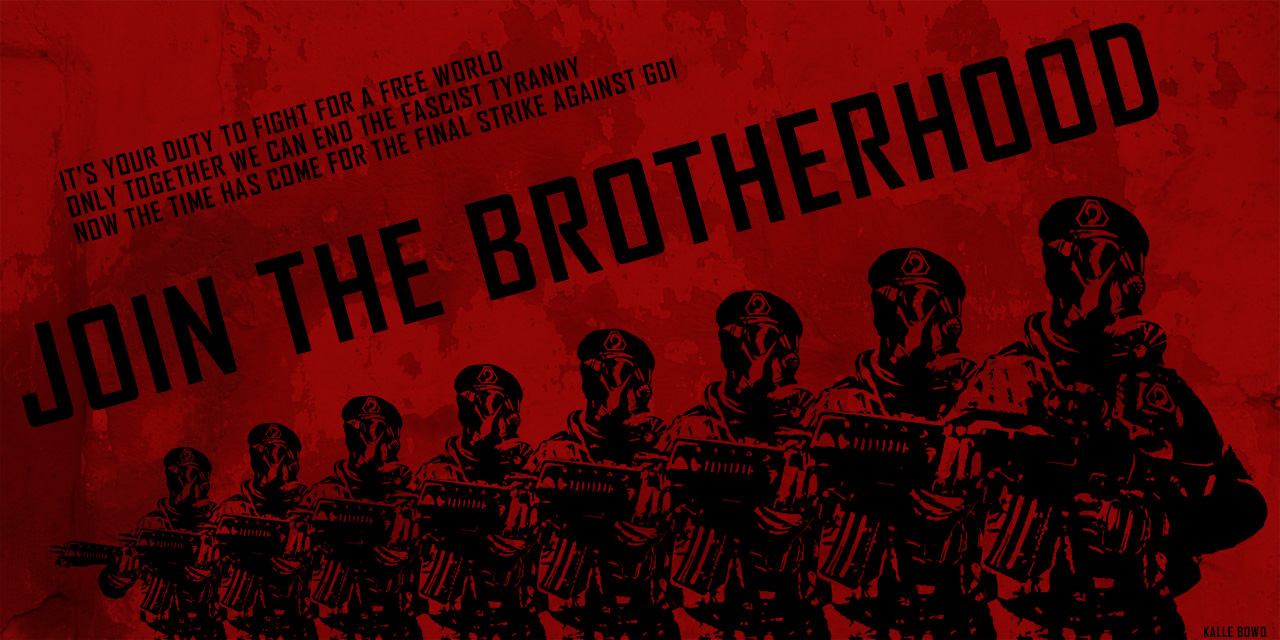 Another main focus of this version was the "Renegade" Nod faction, which received a big deal of well-deserved polishing and new content.
Most notably are the Renegade’s focus on nuclear technologies, like:

But also, "blowing up your units" with hidden explosives got an extensive rework and works now much more intuitively. Btw. if you blow up an Avatar on your own, you can prevent it from leaving a husk ;)

Other things include small changes with big impact, such as the Tiberium Infusion upgrade for Black Hand units or Laser Capacitors for Shadow Teams.

With Renegades done, I am proud to announce that the process of bringing every faction to the same power level could finally be concluded.

Besides that, 0.8 features a more balanced veterancy system, better T1 tank defenses and balanced/more epic unit infantry slots (Firestorm Troopers in MARVs!). With those things being done, the game has never felt so fresh and never offered so many possibilities to play.

If you are interested into some/all the details, you can read the changelog for version 0.8 here:

Nonetheless, here is a small overview of what you can expect in the next version of 0.8

This brief preview concludes the announcement of the next version. If you want to help, you can contact me and play the WIP version, as finding and fixing bugs is still in progress. But I am equally glad if you can help the mod in other ways just as well. Like contribution or just by spreading the word of Kane!

Once the new version is released I hope you will have as much fun playing it as I had developing it :)
So, be excited for a new and big release of Kane's Wrath biggest (and I hope most balanced) mod!

Liquid Tiberium is much more powerful than a nuclear cargo. The Dawnbringer should perhaps start with a regular explosive warhead.
Other than that, I like what I read, the Liquifier Tank looks pretty too and definetly fits MoK much better than the Flame Tank.

yes... but what about a liquid Tiberium Bomb that is ignited BY a nuclear warhead? Think about it as a fusion bomb which is ignited by a nuclear bomb ;)

Ok, a dual fusion-fission device is exotic and I question its viability, but it fits the Tib Universe very well.
Im sold on it!

Interesting, I will have to check this out when it releases.

I'd totally test out what you have done in your WIP version man, send me a message with details and lets do this. Fairly busy with life and other stuff but happy to assist in any way I can, especially with bug fixing/reporting.

Anyone know how to launch this mod though WrathEd Mod Launcher?
it's popped up in launcher but when I launched it, Still in vanilla Kane's wrath.

I really enjoyed the 0.75 mod, though there were some bugs with MoK which really made them irritating to play. Could not build the Mantis for instance. Also, is it possible to snatch the CnC4 Nod Scorpion Tank and fit it into MoK as well? I feel the design of some CnC4 units like its Scorpion Tank and the Reaper Cyborgs would fit really nicely with MoK.

Also, really loving what you did with Reaper17. The mutations are a very nice addition to them and make them feel very unique. I am missing the veterancy on BlackHand's "Black Hand" and "Flame Tanks".

As a final issue I have, maybe it's been changed or not; but I feel the build structures should really reflect on their vanilla KW stats; like Refineries taking the full 15 power points they did in KW for example; just so it doesn't change the meta of how you play KW online. This I think is very important, especially for those of us who play mods in LAN games.

For what you've shown, infantry rework scares me quite a bit, and I'm hoping the newest version doesn't slow the game down; AKA build-times of buildings/units increased and so-on so forth. That's one thing that always annoyed me about Tiberium Wars mods and made the game feel slow and troden, I hope the same issue doesn't plague this mod. And for MoK's Liquid Tiberium Tank... Its "tanks" texture should resemble the texture for the Tiberium Trooper: Bright Green, so there's a sense of continuity. Finally, the changes to MoK's infantry were very huge and for me personally, a bit unwelcomed. Awakened should remain their T1 infantry, expensive, yes but hard hitting; Not Tiberium Troopers. Tib Troopers should stay as their Tier 2 "Anti-Garrison" unit. The Build/Training tabs of production structures with all these "Build Requirements" should follow a certain order: T1; T2; Special Infantry (Secret Shrine/Armory/Stasis Chamber); T3; T4.

Steel Talons, Grey Wolf for example should be Buildable from the MARV facility and not a standard warfactory, being its own specialized unit; though I see going out of one's way to build an armory for it is a bit unorthodox of the standard build meta, it will surprise an opponent. Steel Talons should also drop the MARV and use the Mastadon since they're using Titans, Wolverines and other TibWar 2 stuff. While the change from MARV to Mastadon is welcome with Steel Talons, the same can not be said for regular GDI/RRF and ZOCOM, who have abandoned previous generation tech.

I hope I didn't come off as rude, just pointing out my nit-picks with the mod and offering some suggestions.

I did think about giving MoK a few CnC4 units, but the CnC 4 scorpion looks far too cartoony for my taste.
However, I do consider the Widow tank as an additional unit for MoK...

You think so about less power? I wanted to make the game a bit more accessable to play and thought that 15 power units are not justified for such a central structure.
If so, the war factory should consume more power as well (requires as much as a barracks) and when we are at it, it is probably better to reconsider the power system as a whole.
However, this would only set off everybody completely. I wanted that 2 power plants would be enough to power for 2 refs + some prodection in the beginning.
Or 1 power plant for 1 ref and 1 production structure. It doesn't force you expand with low power.

I appreciate feedback and if any balancing issues are known, I react to them as best as I can and as long as necessary.
So, I would like to wait some time to get proper feedback on the power issue and if it really turns out to be unpopular, I can see it coming back.

I see Kane's Wrath as a rough diamond. While beautiful, it could be so much more with the right effort put into it. That's why I want to try new things and if they don't turn out to be as expected, they go back to status quo.

Infantry rework slowing the game down, why are you fearing that? I only increased price for Nod barracks and GDI missile soliders by 100, but also raised their stats accordingly. Many other units got considerably cheaper.

With One Vision, I want to create factions which don't follow the exact same scheme. My ultimate goal would be to make every faction unique just like Reaper-17.
So, with MoK I just wanted something more differently and I think T1 EMP Cyborg for a relative low price is out of place.
Also, Tiberium Troopers were inspired by Dr. Thraxx's Toxin Rebels, so I think it can work and it's not a bad thing.

As you are playing the beta, you will see that the Liquifier tank is actually not that dark. The screenshot gives the wrong impression.

And yeah, I should probably do that for the Grey Wolf. I just think it looks ugly when you have to scroll down to build a unit.
It's the same with the Dawnbringer device.

Don't worry about rudeness, I prefer if people speak directly.

Steel Talons feels odd with mutants for me, somehow I just can't play them like this while they were my favorite before. Is it possible to release version with standard infantry?

Steel Talons have the mutants for gameplay reasons. And after all it are only "mercenaries", solders who get payed to fight in combat and Steel Talons does pay them quite a nice sum, it's the most expensive starting unit after all ;)

Also, the mutants are the ST's way to fight in heavily Tiberium infted areas. Btw. Reaper-17 does have an artillery unit, it's called "Eviscerator" and is the second mutation for the devourer tank. It's the blue mutation and needs to be unlocked first.

Glad to hear this. Infantry are always fun to use, but it's just so difficult to pull off. =)

Love this mod. I can't wait for the update.