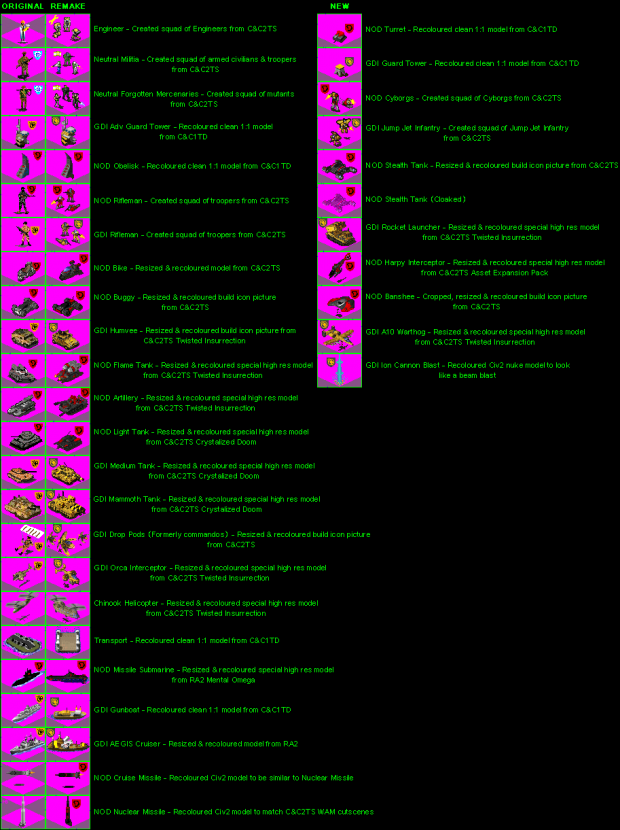 I thought I'd show people a full list of my changes to Wonx's units and all the new additional units I've added to his scenario. Obviously Wonx's original units were more Civ2 style with C&C repaints, whereas mine are taken directly from C&C games and mods to create a more authentic C&C feel (but still with some repaints to fit into Civ2 better). I plan to do something similar with the Red Alert 2 scenario units. As previously mentioned Wonx's scenario is a sort of hybrid C&C1 and C&C2 scenario as it set during the C&C1 Africa Campaign however it features some C&C2 units. I thought it would be fun to continue that theme since C&C2 is of course a isometric 2.5D game like Civ2 which makes asset conversion much easier haha. I still wanted to include as many C&C1 units when possible however C&C1 units are mostly 2D top down and are often too low res even for Civ2 lol so that is why I used units (with permission) from cool C&C2 mods like Crystallized Doom and Twisted Insurrection , along with the Red Alert 2 Mental Omega mod as they include lots of cool remade higher res 2.5D C&C1 units.